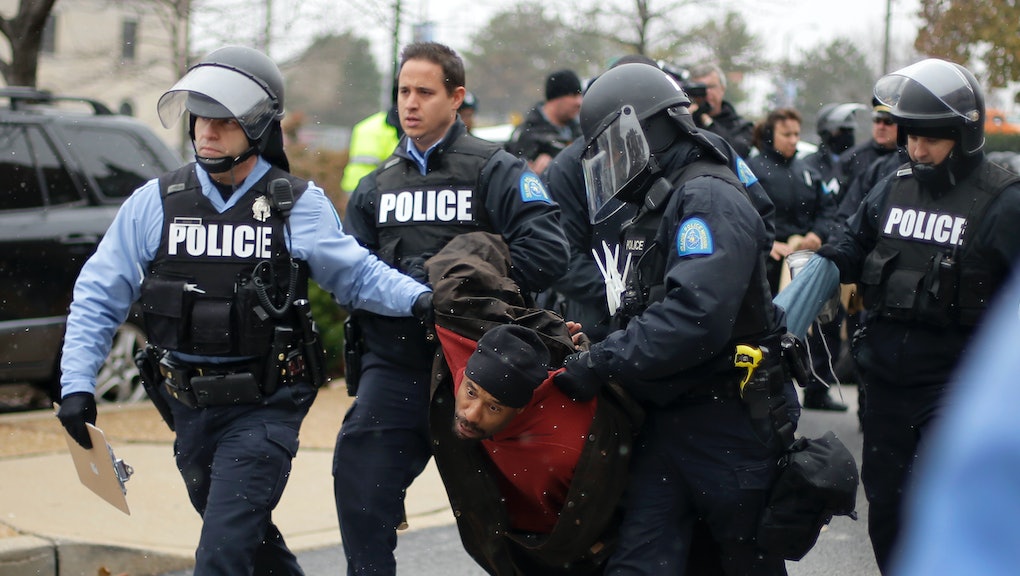 The Illinois state legislature has just passed a bill that could dissuade people from recording the police. Advocates worry that it might even make it illegal to do so.

The bill, which is awaiting Governor Pat Quinn's signature, is meant to criminalize recording someone in private without his or her knowledge. But a lack of specifics could leave it to the courts to figure out when, say, a police officer is operating in public or in private, which could make potential do-gooders into felons.

The background: Illinois originally passed an even stricter law that forbade any recording in which all parties hadn't given explicit approval. That one was struck down by the state Supreme Court, which noted that it would have criminalized everything from recording a loud argument on the street to recording fans yelling at sporting events.

"None of these examples implicate privacy interests, yet the statute makes it a felony to audio record each one," Chief Justice Rita Garman wrote in the decision. "Judged in terms of the legislative purpose of protecting conversational privacy, the statute's scope is simply too broad."

This new law is meant to be the fix. It still states that it's a felony to record any "private conversation," defined by at least one person in the conversation having a "reasonable expectation" of privacy. "Public" conversations are theoretically OK to record.

But who has a "reasonable expectation" of privacy? Police activity on the street seems like it should be public, but it's not specifically stated, and there's a gray area regarding police activity in someone's yard or even home. (Courts have held up citizens' rights to record police in the past, and it's illegal for police to take your recordings or device without a warrant.)

"There's only one apparent reason for imposing a higher penalty on people who record police in particular: to make people especially afraid to record police," write Jacob Huebert and Bryant Jackson-Green of the libertarian nonprofit Liberty Justice Center. "That is not a legitimate purpose."

If recent history is any indication, American's can't be too afraid of police to record their activities — both for our safety, and for theirs. Officers will be more likely to respect citizens' rights — and they'll be able to prove it.