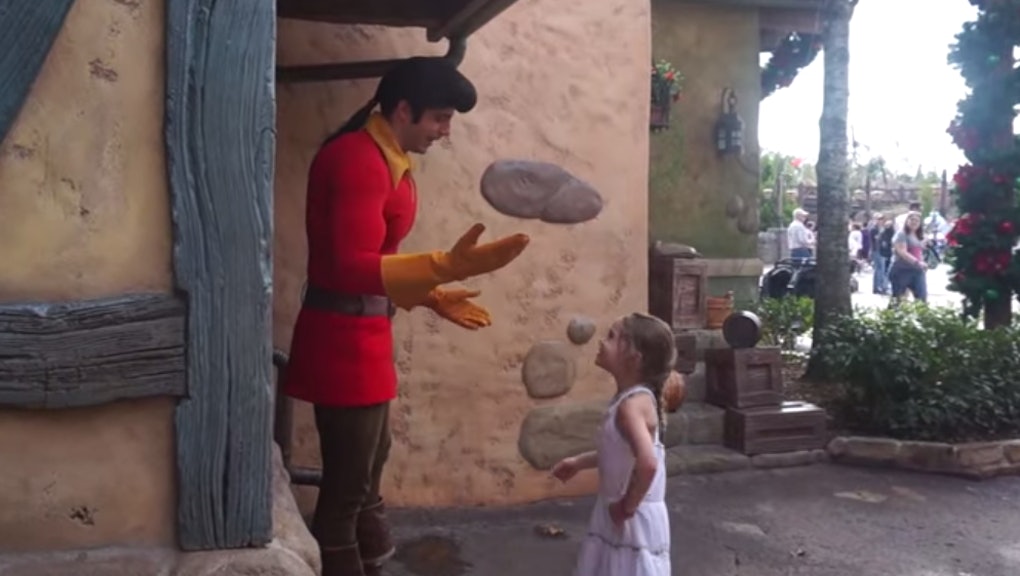 Children and adults everywhere have a soft spot for Disney films. As time goes on, however, many realize the beloved animated classics and characters promote problematic stereotypes about beauty, body image and a woman's place in the world.

Despite that unfortunate reality, there's hope for the next generation. During a recent trip to Disney World, a young girl named Isabella laughed in the face of one of the most sexist characters in the canon: Gaston, the villain from Beauty and the Beast. And despite some of the still-in-character actor's machismo-fueled quips, Isabella didn't hold back in the exchange, proving it'll take much more than brute male intimidation to silence female voices, no matter how young.

"You're not marrying Belle," the child informed him. "No you're not. You are, never, ever, ever."

The clip, uploaded recently by video blogger JonasAlmostFamous, seemed to simply show a child's harmless interaction with a theme park actor. (As a quick primer: The vain, cruel Gaston targeted Belle with frequent, unwanted attention, making it clear he wanted her to be his wife, cook for him and have his babies in cringe-worthy monologues and solos.)

Isabella, however, was having none of that. The pint-sized critic approached Gaston at the theme park for a brief meet-and-greet, where she unflinchingly defended Belle while also standing up for Gaston's favorite bullying target, the Beast. Despite Gaston's true-to-form insistence that Belle was his, Isabella stood her ground.

The actor playing Gaston continued to push on, asserting his masculinity with a smug smile and muscles flexed to show just how much better he was than the Beast. "I don't know where this girl came from, but someone needs to put her back in a kitchen right now," he said to audible gasps and nervous laughter from the crowd. "Come on, now, at least you get a portrait with me. Go on ahead. Smile like you're making a sandwich."

After a quick photo together, Gaston was fed up with Isabella's persistence, shooing her away to perform her so-called womanly duties. "No more thinking for you, you've done enough of that," he said. But it was ultimately the precocious Isabella who had the last word.

"The Beast is going to beat you. The Beast just turned into a prince, and he's stronger than you," she responded. "The Beast will fight with you. And he will win the fight. ... You don't know what you're doing."

In the end, Gaston had no choice but to back down. "I've been outdone by a girl — a short one," he told another member of the crowd.

This badass Disney fan's insistence that she wouldn't accept a man talking down to her — despite him being much taller and older than she is — is an encouraging sign for a demographic long taught to avoid being perceived as pushy or bossy. In fact, this kind of outspokenness shouldn't be discouraged from young girls, who are often told they should reserve their opinions and avoid challenging men.

At the same time, this exchange is another reminder of the influence Disney and other animated movies continue to have over American children and teens, which is why it's important that these types of movies don't perpetuate damaging, gendered stereotypes, from rape culture to body image.

Isabella deserves to grow up in a world where her heroines feel empowered to live their life free from unrealistic beauty standards and other gendered cultural expectations, and where her heroes respect women because they realize doing so does not in any way make them less of a man.

Until this happens, keep fighting the good fight, Isabella.