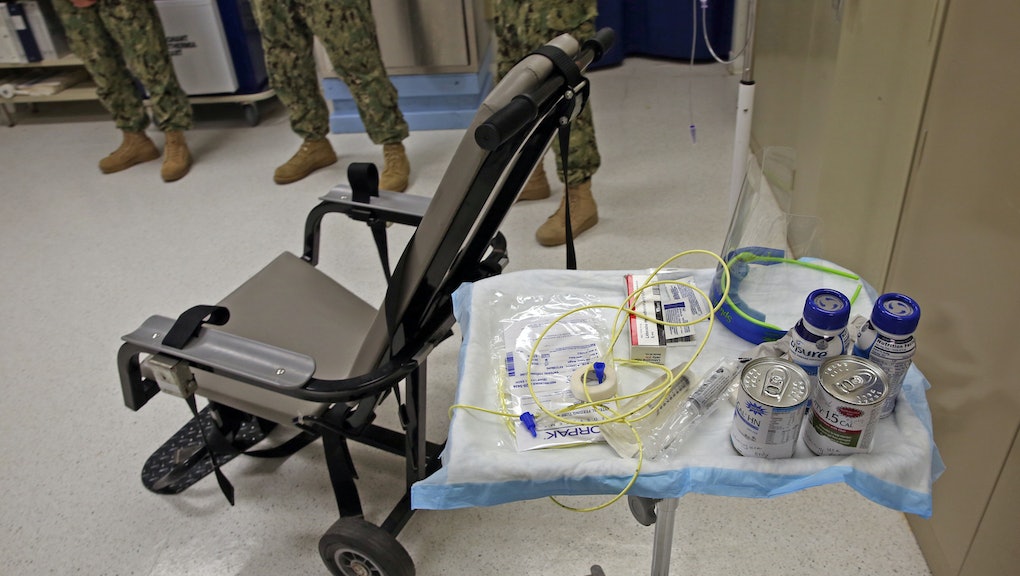 One Tweet Sums Up America's Hypocrisy on the CIA Torture Report

On Tuesday, shortly after the Senate Intelligence Committee released its long-awaited torture report, chairwoman Sen. Dianne Feinstein (D-Calif.) delivered the report's key findings — that the CIA used coercive and brutal yet largely ineffective techniques on prisoners — on the Senate floor.

In an attempt to introduce possible motivations behind the abuses, she touched on the immediate aftermath of 9/11, noting, "We came together as a nation with one singular mission: Bring those who committed these acts to justice."

But, Feinstein continued, America's definition of justice — torturing those whom we believed were in possession of important, relevant information — became warped and contradicted our former promises. She went on to say:

"In 1990, the United States Senate ratified the Convention Against Torture. The convention makes clear that this ban against torture is absolute. It says, and I quote, 'No exceptional circumstances whatsoever, including what I just read [about 9/11], whether a state of war or a threat of war, internal political instability, or any other public emergency may be invoked as a justification for torture,' end quote."

Implicit in this quote is the suggestion that the United States violated these rules: The treaty expressly states there is no justification for torture, yet CIA interrogators still went ahead and did it.

While Feinstein's point is valid, the Intercept's Glenn Greenwald highlighted a telling omission in Feinstein's decision to quote straight from the treaty itself:

He's correct. From Article 7 of the treaty: "The State Party in the territory under whose jurisdiction a person alleged to have committed any offence ... if it does not extradite him, submit the case to its competent authorities for the purpose of prosecution." [Emphasis Mic's.]

In other words, while Feinstein was right to imply that the United States violated a major U.N. convention, she forgot to include what should happen as punishment: prosecution of those responsible. It's all well and good for the government to admit to these heinous acts, but unless something is done to bring those in charge to justice, America doesn't have a leg to stand on.

Especially when you consider our condemnation of other countries. The Obama administration has previously directed harsh criticism of human rights abuses elsewhere in the world, which now looks rather hypocritical in light of the torture report.

In 2013, for example, senior Obama adviser Susan Rice chastised China and Russia over their treatment of their own citizens. "The Chinese people are facing increasing restrictions on their freedoms of expression, assembly and association. This is short-sighted," she said, adding that Russia has also engaged in "systematic efforts to curtail the actions of Russian civil society."

Meanwhile, in February, the administration declared that a chemical weapons attack in Syria that killed an estimated 1,400 people was the worst human rights violation of 2013.

No one would deny these incidents are terrible, but the fact that the United States is criticizing them without taking responsibility of its own human rights abuses is deeply problematic. China said as much in its response to the report: The U.S. should "clean up its own human rights issues," read an item by a state-run news agency.

So what would that look like? The American Civil Liberties Union laid out its reasoning for an investigation, noting, "Given the gravity of the conduct described in the report, the Justice Department has a duty to investigate issues of criminal responsibility. A criminal investigation is an unequivocal obligation under international law. It is also necessary to repair our country's damaged moral authority and prevent similar abuses from occurring again."

Though ACLU director Anthony D. Romero recently argued that pardoning those responsible may actually be the smartest route ("because it may be the only way to establish, once and for all, that torture is illegal"), either way, something needs to be done.

"The CIA's Detention and Interrogation Program damaged the United States' standing in the world," read Tuesday's report. If we don't take real steps to delivering justice to those responsible, that damage will only get worse.