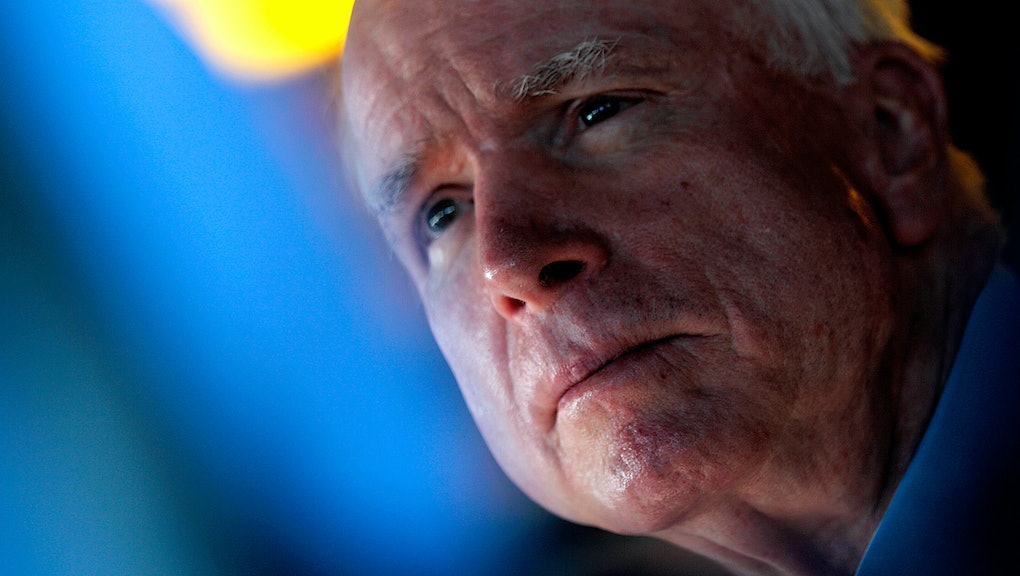 The long-awaited report on CIA torture tactics was publicly released Tuesday to widespread public outrage. We now know agents used horrific tactics on detainees suspected of terrorist activities, including forced rectal feeding, keeping detainees awake for 180 hours, forcing a prisoner to stand on broken feet and threats that agents would rape an inmate's mother. One prisoner even died from hypothermia while naked from the waist down and shackled to the walls of his cell.

As legislators respond to the report, one stood out in particular: Sen. John McCain (R-Ariz.), who told the Senate the incidents have "stained our national honor."

"The truth is sometimes a hard pill to swallow," McCain said. "It sometimes causes us difficulties at home and abroad. It is sometimes used by our enemies in attempts to hurt us. But the American people are entitled to it, nonetheless."

McCain knows a little more about this topic than most. Shot down Oct. 26, 1967, in Vietnam, McCain was tortured by North Vietnamese intelligence officials for years. So when he talks about torture, people should listen. He's one of our only elected representatives to have experienced it firsthand.

"I know from personal experience that the abuse of prisoners will produce more bad than good intelligence," he said. "I know that victims of torture will offer intentionally misleading information if they think their captors will believe it. I know they will say whatever they think their torturers want them to say if they believe it will stop their suffering.

"Most of all, I know the use of torture compromises that which most distinguishes us from our enemies, our belief that all people, even captured enemies, possess basic human rights, which are protected by international conventions the U.S. not only joined, but for the most part authored."

McCain is furious, but not surprised: McCain accused some colleagues of propagating "misinformation," suggesting that releasing the report was a security risk. He basically accused members of the intelligence community and Congress who claimed the report was too incendiary to release of lying.

"The entire world already knows that we water-boarded prisoners. It knows we subjected prisoners to various other types of degrading treatment. It knows we used black sites, secret prisons. Those practices haven't been a secret for a decade," McCain said. "Terrorists might use the report's re-identification of the practices as an excuse to attack Americans, but they hardly need an excuse for that. That has been their life's calling for a while now."

Finally, McCain suggested intelligence officials were attempting to cover-up the fact that torture is a terrible way of extracting reliable information from prisoners and that over-reliance on it likely cost American lives.

"What might come as a surprise, not just to our enemies but to many Americans, is how little these practices did to aid our efforts to bring 9/11 culprits to justice and to find and prevent terrorist attacks today and tomorrow," he said. "That could be a real surprise, since it contradicts the many assurances provided by intelligence officials on the record and in private that enhanced interrogation techniques were indispensable in the war against terrorism.

"And I suspect the objection of those same officials to the release of this report is really focused on that disclosure — torture's ineffectiveness — because we gave up much in the expectation that torture would make us safer. Too much."

But ultimately, McCain said his opposition to torture had nothing to do with its effectiveness but out of a conviction that "Our enemies act without conscience. We must not."

McCain isn't some kind of hippie peacenik. He's actually one of the crankiest, most ornery war hawks in the Senate. McCain's the kind of politician who believes America needs to yell loudly and carry an even bigger stick, so his testimony against torture can't be interpreted as some kind of rank political flip-flopping.

In fact, McCain has a long record of speaking out against acts of torture. He previously argued that a botched execution in his state amounted to torture, and before the report's release, deemed certain CIA practices in the War on Terror "unconscionable." In 2005, he forced President George W. Bush to sign a ban on torture, which it looks like the CIA ignored anyway, and has been mostly consistent on the issue since.

So when McCain says torture is never justifiable, you should listen, even if you disagree with him on everything else. Because this isn't a crafty McCain trying to navigate the political winds or backtrack on a position he now knows was a mistake. This is a man speaking from a genuine well of conscience — and anger that the U.S. allowed itself to sink to such lows.