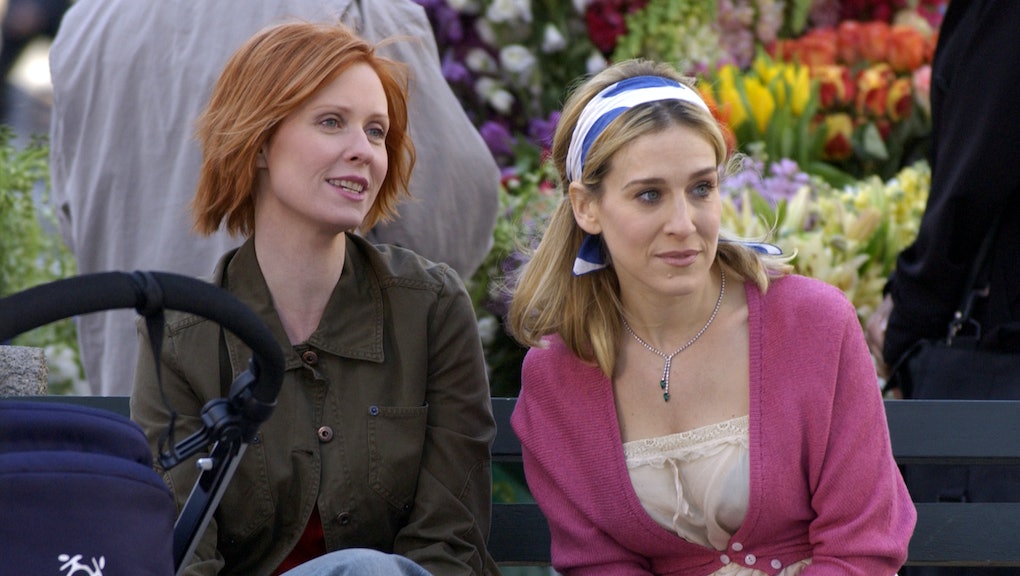 Carrie Bradshaw was, to understate it, complicated. Just when her endearingly zany antics had earned your love, she'd go and say something that would make you cringe in horror and all but throw your TV through your window. And this happened about every seven minutes in any given Sex and the City episode.

But between all her navel-gazing and nonsensical musings (not to mention her incessant use of "I couldn't help but wonder..." and "It got me thinking..."), Sarah Jessica Parker's character actually made some sense. Sandwiched between all that nonsense were wonderful "a-ah!" moments, times when you couldn't help but think Ms. Bradshaw had just stumbled over a worthy truth plenty of other women would do well to hear.

When you get down to it, as Emily Nussbaum pointed out in the New Yorker, Carrie was speaking from an all-too-real place. Love made her "anxious, obsessive and, despite her charm, wildly self-centered — in her own words, 'the frightening woman whose fear ate her sanity.'" In other words, just like us. Sure, she was nuts, but that nuttiness was the result of life experience, and with life experience came wisdom that still rings true today.

Don't give up on her yet. Take a closer look at what Carrie was really saying when she was rambling on love and lust.

"Friendships don't magically last 40 years. You have to invest in them. It's like your savings: You don't expect to wake up one day when you're old and find a big bucket of money waiting there."

Considering how often she disappointed her friends and the fact that her money was "hanging in her closet," it's amazing how spot-on Carrie was this time. All relationships, friendships or otherwise, do take real effort and investment of time and emotion. This rings even truer the older we get and the further we drift from friends. As Ann Friedman recently wrote in the Cut, "It can be surprisingly difficult to prioritize platonic love." But that love between friends is crucial — and one of the most rewarding kinds we have.

"The most exciting, challenging and significant relationship of all is the one you have with yourself. And if you can find someone to love the you you love, well, that's just fabulous."

Although it was usually Samantha who exhibited enough self-love and confidence for all four of the Sex and the City ladies, it was a refreshing moment to see that Carrie too could understand this lesson after all the years of obsessing over men. As any 20-something dating knows, significant others cycle in and out of your life, but when those dark Sunday nights roll around and you're left to your own devices, the most important thing is being at peace with who you are.

"Being single used to mean that nobody wanted you. Now it means you're pretty sexy and you're taking your time deciding how you want your life to be and who you want to spend it with."

Carrie's tendency to peg her own significance to a significant other often clouded her better judgment. But it was when she said things like this that her single fans rejoiced, as opposed to kicking themselves for not having a partner. Being single doesn't mean you're a pathetic, unlovable human; it means that you're in the driver seat of your own life. And that can be pretty amazing.

"I will never be the woman with the perfect hair who can wear white and not spill on it."

In the age of Instagram and Pinterest, it's easy to get caught up in the delusion that everyone else has their shit together more than you, from perfect outfits to beautifully tidy apartments (not to mention latte art that never spills). But Carrie was under no illusions, nor should we be — her whole being was frizzy, klutzy and a little scattered. Better that than unattainably perfect.

"The most important thing in life is your family. There are days you love them and others you don't, but in the end, they're the people you always come home to. Sometimes it's the family you're born into and sometimes it's the one you make for yourself."

We may have never seen much of any of the characters' blood family, aside from Miranda's sister when her mother died and Charlotte's brother who slept with Samantha. The women were each other's family. The older we get, the more the consistent relationships in our lives ground us, whether those are blood relatives or the friends who've become like family (Friendsgiving, anyone?). They're bonds that last longer than a pair of Manolos — and provide more support.

6. On the delusion of fate

"I got to thinking about fate. That crazy concept that we're not really responsible for the course our lives take. That it's all predestined, written in the stars. Maybe that explains why, if you live in a city where you can't see the stars, your love life tends to feel a little more random."

Sure, this was one example of Carrie "getting to thinking" about something in more convoluted terms than necessary. But pondering fate brings us to an important realization: If we don't let ourselves get hung up on something as fantastical as fate, you open your mind and heart to possibilities not dictated by fairytales, the kinds of possibilities we can grab for ourselves. Knowing you're in charge of your own life is empowerment at its best.

7. On embracing your weirdness

"Somewhere out there is another little freak who will love us and understand us and kiss our three heads and make it all better."

Screw basic dating profiles and trying to be the "cool girl." Someday you'll find someone who will think every ounce of your madness and quirks is infinitely awesome. It's just might take time before you finally find him or her. In the meantime, don't give up those three heads; they're what make you interesting.

8. On living in the moment

"Maybe the past is like an anchor holding us back. Maybe you have to let go of who you were to become who you will be."

Another unnecessary metaphor from our favorite wordsmith, but it's true: Too many of us spend too much time dwelling on the "what ifs." If we learn to live with the lives we have today, as the people we are today, we'll be able to proceed sans delusions and hangups. It's tough, but accepting who you are at this moment is what maturity looks like.

"Destroy all pictures where he looks sexy and you look happy."

In this episode, Carrie covers four break-up "rules," but this one in particular, petulant as it sounds, resonates even more now that we have Instagram and Facebook. It's only in creating distance from the good times and quitting our obsession over the old images (and his new ones) that we're able to move on and heal. These days, Carrie would probably say, "Delete all pictures where he looks sexy and you look happy," plus unfriend him on Facebook.

10. On the messiness of love

Who didn't gasp when she said this to Aleksandr Petrovsky and yell out, "Yes! Yes! Me too, Carrie! Me too!" Sure, she's holding the big L-word up on a pedestal — but it's a messy, inconvenient pedestal. Anyone who's ever been in love knows that it's not always easy: It takes effort, and the lengths it requires will sometimes seem ridiculous. But a great love isn't a perfect one, all tied up in a bow. And that's OK.

"As we drive along this road called life, occasionally a gal will find herself a little lost. And when that happens, I guess she has to let go of the coulda, shoulda, woulda, buckle up and just keep going."

No truer words have ever been said – especially from Carrie Bradshaw, who lingered on things longer than she probably should have. Life is all about bouncing back from the latest bump in the road and not fixating on regret for what might or might not have happened.

12. On finding a person who loves you for you

"Maybe some women aren't meant to be tamed. Maybe they need to run free until they find someone just as wild to run with."

Yes, this might be the most universally loathed Carrie lines in the entire series. But beyond the aggressive equestrian metaphors and cheesy music, Carrie's point is wise: If you're with someone right, you'll make adjustments and compromises... but you shouldn't have to totally change who you are.