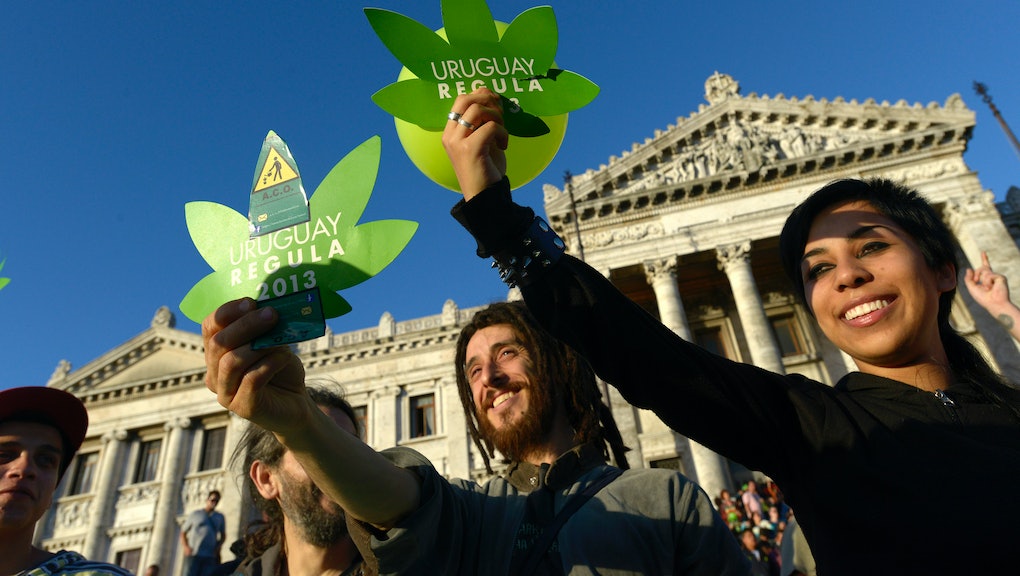 One Year After Uruguay Legalized Marijuana, Here's What It's Become

One year ago, Uruguay became the first country in the world to completely legalize marijuana in a move that has since been dubbed the "great experiment." But for the last few months, it looked like Uruguay's experiment was coming to an end as public sentiment continued to go against legal marijuana and a rising presidential candidate vowed to repeal much of the law if elected.

At the end of last month, however, voters in Uruguay granted the leftist Broad Front coalition another presidential term by electing 74-year-old oncologist Tabare Vazquez over center-right National Party candidate Luis Lacalle Pou, 53% to 40%. In doing so, Uruguay solidified its left-leaning status and kept alive the country's legal marijuana and the government's growing dispensary system.

So while the "great experiment" almost came to an end before it ever really got its feet off the ground, it has lived to fight another day. But how, then, has this experiment in legalization worked out for the country over the past year?

Where we are now: On Dec, 10, 2013, Uruguay became the first country to legalize marijuana, but they're doing things a little differently.

Private citizens are allowed to cultivate up to six plants in their houses and can form private grow clubs that produce significantly more. However, all sales must go through the federal government, which is supposed to set up a network of dispensaries and determine prices.

Each customer must register with a database run by the Ministry of Health and will be restricted to buying 40 grams (about 1.4 ounces) per month, more than most actually consume. To attract customers, the price will be set at about $1 a gram, which is close to the street price of illicit marijuana imported from Paraguay. Smoking marijuana on the job remains illegal, as does operating any kind of vehicle while high. Violators will be punished with fines ranging from $2 to $87, with other penalties including the destruction of weed stashes and expulsion from the registry.

Unfortunately, the government is still working on setting up that dispensary network. In November 2014, the National Board of Drugs said that the date they would open had been rolled back to March.

This past July, then-President Jose Mujica told the AFP that progress should be expected to be slow, criticizing the idea that the new policy should be rushed. "We are not just going to say, 'hands off and let the market take care of it,'" he said, "because if the market is in charge, it is going to seek to sell the greatest possible amount."

In the meantime, citizens are free to grow their own marijuana under the other exemptions set up by the law.

The architect's blueprints: Though the law was truly the work of many politicians and legalization supporters, former President Mujica was in many ways the law's architect. Not only that, but he was comfortable enough with the drug to film an interview with Vice while reporter Krishna Andavolu smoked weed in front of him, receiving only a bemused chuckle in return.

"There has always been a conservative and reactive opinion that fears change. The sad part is that a man who is almost 80," the president said while pointing to himself, "has to come and propose a youthful openness to a conservative world that makes you want to cry."

The law's main intention, Mujica noted, was to seize the market from illegal drug dealers, not encourage people to smoke weed. Mujica's insistence that the new law is merely "regulation of a market that already exists" is a recurring theme in the government's pro-legalization arguments.

Uruguay's model, Andavolu explained, is paternalistic and not entirely evidence-based. For Mujica, this isn't an American-style experiment in freedom and personal choice. It's a health and public safety issue that requires government action. "If I have to take a drug in order to be free, I'm screwed," he told Andavolu. "You can't buy freedom in little jars. That's a brutal dependency. If I'm dependent, I'm not free."

Potential drawbacks: For one, not everyone trusts the government, and it's this attitude that has some cannabis activists in Uruguay alarmed. They fear the required user database will be used by future governments for sinister purposes.

"I think that the only ones who are going to register are the young people, the ones who didn't live under a dictatorship," weed advocate Alicia Castilla told Vice. "All of us who know what the government can do to people don't want to."

Other activists cited problems with the law's restrictions on the amount of marijuana citizens are allowed to grow. Alejandro Gianades, who lives in Cabo Polonio, a rural beach town that hosts a small but thriving cannabis subculture, told Vice that the potency of each individual plant varies according to its size and quality, meaning the six-plant limit is somewhat arbitrary. A particularly good, robust plant with many leaves and a high THC level can last a user as long as several scrawny ones.

However, those who want to grow more than the six-plant limitation can join or form a cannabis growing club, which has a much higher, 99-plant limit. If an experienced marijuana farmer manages the crop, those 99 plants are capable of producing a very large amount of premium marijuana, which is why some clubs have taken to hiring premium staff.

Running these kind of services is very complicated — factors such a light, temperature and humidity are all carefully tracked — and requires a lot of money. The Associate Press reported that the first club to register in Montevideo, which calls itself The Association of Cannabis Studies of Uruguay, had around 40 members who each paid a $300 admission fee; a monthly membership cost of $65.

Its president, Laura Blanco, told El Pais that establishing such a club is an "expensive proposition when it comes to sharing the cost burden, above all the fixed cost," adding that the maximum size of 45 members makes it difficult to grow weed cheaply. Each member of a club is limited to taking 480 grams of weed home with them each year, just short of 17 ounces. But it's still far from an open market.

With no dispensaries open, many Uruguayans are indeed growing their own marijuana. Urugrow, a dispensary in Montevideo, sells all the supplies needed to do just that; owner Juan Manuel Varela told the Globe and Mail that his customer base had grown since the legalization law was passed. Turnover has doubled.

But what about those who don't want to grow? Many Uruguayan marijuana users won't want to go through all the trouble of growing their own plants in the first place. They have two options: roll the dice and register with the government to gain access to a limited supply of legal but relatively expensive and mediocre marijuana, or continue buying from the illegal marketplace. How many choose to leave the black market behind will be the crucial factor that makes or breaks Uruguay's experiment.

Fighting the black market: Secretary-General Julio Calzada of the National Drug Council, who spearheaded the reform, is convinced that having a legal source of marijuana will do more to fight the illegal marijuana trade than cracking down on dealers.

"In Uruguay, there are about 120,000 daily-to-occasional cannabis users. At present, these people are buying from criminals and strengthening local mafia," Calzada said in an interview with Reason in 2013. "If the government can take control of that market, criminal organizations will lose their main source of income."

"With the infamous 'Plan Colombia,' the U.S. thought it could pulverize drugs with an iron fist. But the only thing it achieved was to spread organized crime across the entire continent," he added. "After half a century of disastrous results we're choosing to embark on a different path."

Calzada also cited some alarming statistics: Eighty-two people died due to cartel violence in 2012, and violent crime increased by 32% in 2011. Previously "unheard of" contract killings were beginning to pop up.

By regulating marijuana, Calzada told Reason he believed they could see the same success they saw lowering the tobacco smoking rate among young people from 32% to 12% since 2005. Currently, just 14% of Uruguayans between the age of 16 and 64 have used marijuana.

By controlling and regulating the flow of marijuana at least partially, Calzada thinks they can lower the marijuana smoking rate as well as prevent users from doing dangerous things like smoking prensado paraguayo, a "compressed blend of leaves, glue, oil, faeces, chemicals and so on."

Even some left-leaning marijuana activists are critical of the pharmacy plan. Juan Tobino, who works at the Yuyo Brothers head shop in central Montevideo, says that "... all drugs should be legalized. And, of course, pharmacies should not sell marijuana, it should be sold by shops like mine."

What happens next: A lot rests on whether the newly elected Vazquez, whose previous term in the presidency was marked by a crackdown on tobacco smoking, determines he can tolerate marijuana being sold in pharmacies. He's previously been skeptical of government distribution of weed, reports the Guardian:

When Vázquez passed tough anti-tobacco legislation including a ban on smoking in enclosed public spaces, risk warnings covering 80% of cigarette packs and a ban on advertising and sponsorships, Philip Morris proceeded to sue Uruguay. An arbitration ruling is still pending before the World Bank.

If the dispensaries open in March as promised, than Uruguay will really be stepping into unknown territory. But the impact of legalization can already be felt far and wide. People now openly smoke weed throughout the streets of Montevideo, free from fear of harassment by the police.

"I personally had never imagined such a huge step forward from Mujica," Cultivando Libertad Uruguay Crece head grower Damian Collazo told the Denver Post. "It's hugely daring. And I don't know if a different president would have taken this step."

It remains to be seen whether Vazquez will take the next one, or if he'll determine that Uruguay's already gone one step too far in an uncertain climate. It seems likely that at the very least some compromise will be reached instead of an outright repeal.

For proponents of marijuana reform, the mere fact that the law was passed and is in the process of being implemented is a major victory. Just a few years ago, legalization would have been unthinkable. Now, it's tangible. Uruguay was the first country to decide prohibition can't win the war on weed, but it won't be the last one.