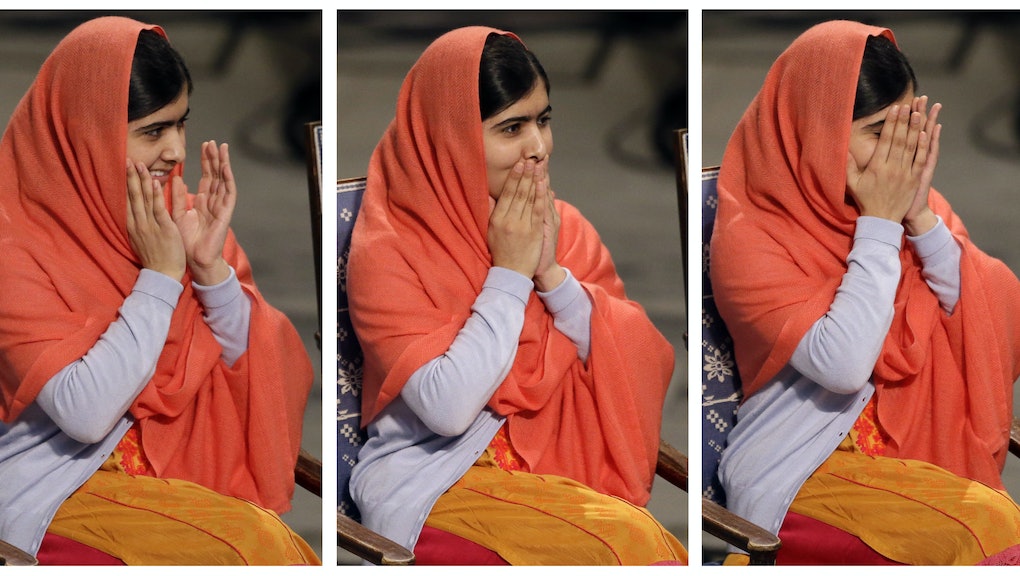 That was the message of Malala Yousafzai, the youngest Nobel Prize recipient in history, during her acceptance speech on Wednesday in Oslo, Norway. Yousafzai and Indian children's rights activist Kailash Satyarthi were awarded the 2014 Nobel Peace Prize in October "for their struggle against the oppression of children and young people and for the right of all children to education."

She questioned why adults, who are supposed to be responsible and knowledgeable about things children often aren't, resort to the worst kinds of human behavior themselves. "Why is it that countries we call 'strong' are so powerful in creating wars but so weak in bringing peace?" she asked. "Why is that giving guns is so easy but giving books is so hard? Why is it that making tanks is so easy, but building schools is so difficult?"

To drive her message home, Yousafzai brought an important symbol with her to the Nobel festivities in Oslo: The bloodied uniform she was wearing in 2012 when a Taliban gunman shot her on a school bus in response to her campaign for girls' education.

"Education went from being a right to being a crime," she said. "But when my world suddenly changed, my priorities changed, too. I had two options: One was to remain silent and wait to be killed. And the second was to speak up and then be killed. I chose the second one. I decided to speak up."

She's committed to an issue that needs attention. According to UNICEF, an estimated 31 million girls of elementary school age, and 34 million girls of lower secondary school age, did not attend school in 2011. Although there are many reasons for this, including limited resources, a lack of teachers and family priorities, much of it is still rooted in discrimination.

"Despite progress in recent years, girls continue to suffer severe disadvantage and exclusion in education systems throughout their lives," UNICEF notes. And as Yousafzai's story shows, girls too often face physical violence when they attempt to gain access to education.

On Wednesday, she spoke of building a secondary school in her own village, but added that she still has more work to do. "Though I will be one girl receiving this award, I know I am not a lone voice," Yousafzai said in a statement on Monday. "These courageous girls are not just my friends, they are now my sisters in our campaign for education for every child."