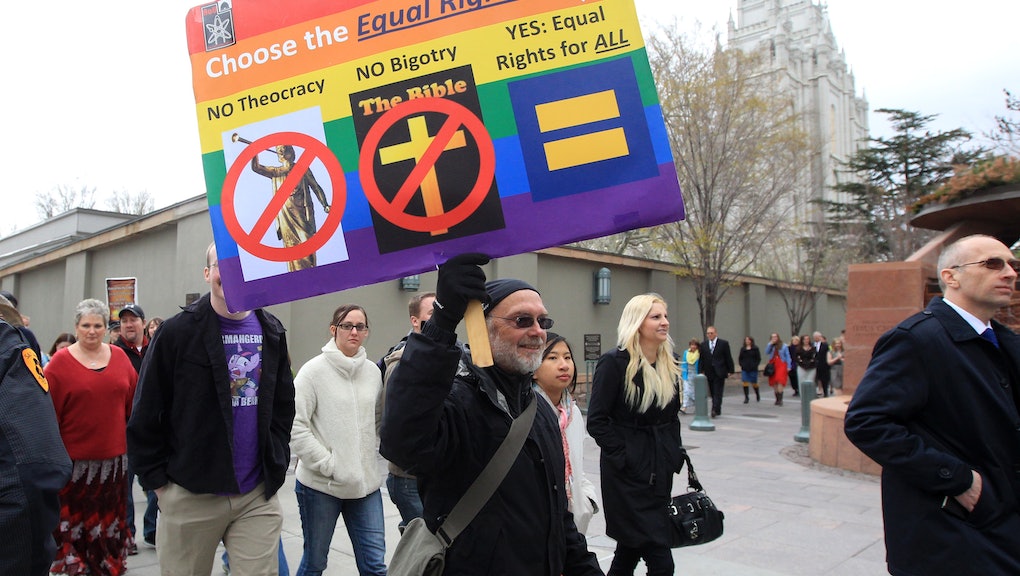 There's One Group Almost Every Country on the Planet Discriminates Against

People who don't believe in God are increasingly becoming the target of "hate campaigns" around the world. These campaigns aren't just being led by religious radicals — political leaders are joining in too.

A report by the International Humanist and Ethical Union, a humanist rights organization, reveals a "marked increase" in the targeting of atheists, both legal and social, driven by "intolerance toward these groups" expressed in hate speech and discriminatory laws. The report is the first to look at how the non-religious are treated for their beliefs — and the findings are shocking.

In 12 countries, it's still possible to be put to death for being an atheist. This year Egypt detained atheists who publicly expressed their views, and Saudi Arabia passed a law that equates atheism with terrorism. In May, Malaysia's prime minister branded "humanism and secularism as well as liberalism" as "deviant."

You don't have to be an atheist living in a fundamentalist theocracy to be subjected to discrimination by your government — secular nations are treating atheists just as troublingly.

Even in the U.S., there are "significant anti-secular issues," particularly at the state level. Although the Constitution prohibits "'religious tests for public office," in eight states, laws block atheists from holding public office. These laws can even "extend to the banning of atheists from testifying in court" — although humanist organizations are attempting to finally dismantle the antiquated laws.

Though it may be legal to run for public office as an atheist in the remaining states, the stigma attached can "have debilitating consequences for your chances of success in life, especially in certain states," the report says. A recent survey cited in the report found that most Americans are less likely to vote for a presidential candidate who is an atheist. Moreover, "'no other trait, including being gay or having never held elected office, garnered a larger share of people saying they'd be less likely to support the potential candidate.'"

The report underscores the way we think about atheism: Atheists are perceived as everything from "immoral hedonists" to "arrogant and aggressive proselytizers" who are angry with God. A survey by the Pew Research Center found that Americans view atheists least favorably out of any other religious group.

In reality, atheists are simply those who don't believe in the presence of a god; they're motivated to this belief by a variety of individual reasons. Discrimination against atheists tends to arise from political suppression, as many fear such progressive values and the non-believers' tendency to ask questions and raise doubts.

But it's just as wrong to discriminate against and stereotype the non-religious, as it is the religious. We have a right to a freedom of thought and expression and that doesn't fall to the wayside when a belief in the existence of God does.