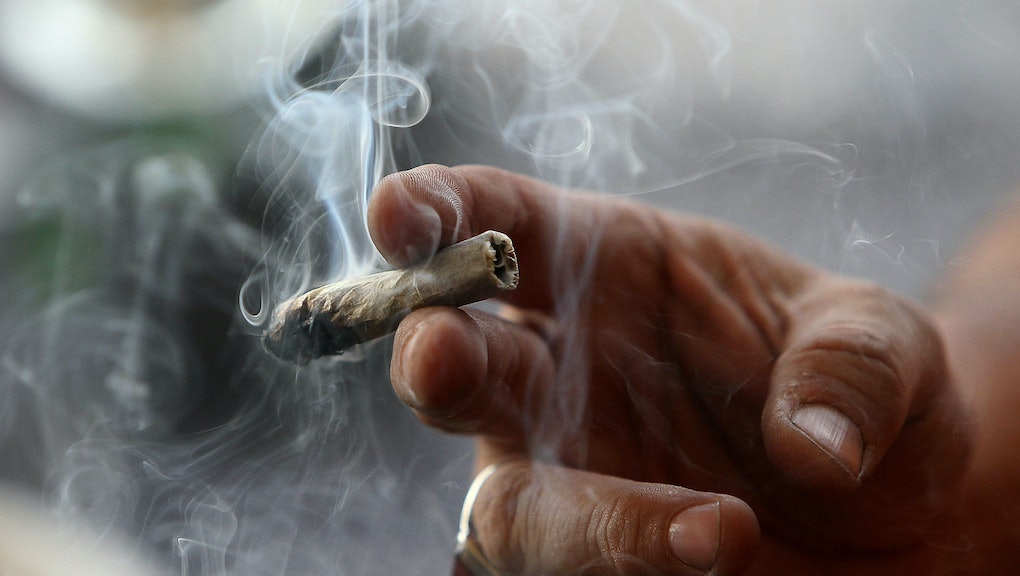 Congress Should Mind Its Own Business and Let D.C. Legalize Marijuana

In November, Washington, D.C., voters approved a measure to legalize the possession and use of marijuana inside the district's borders.

A month later, federal legislators on Capitol Hill — a group that does not include a single voting representative from the city — are preparing to sign off on a massive spending bill with a series of provisions made to undermine the will of the people.

Initiative 71, which passed with 70% approval, would allow D.C. residents to possess up to 2 ounces of marijuana, give away (but not sell) 1 ounce and grow as many as six bud-yielding plants.

But that vote is now being thwarted by a Congress composed almost entirely of members with no lasting ties or meaningful responsibility to the community they presume to govern. Led by House Republicans, both chambers are preparing to sign off on an appropriations bill riddled with "riders," or special provisions, that will ban D.C. from using taxpayer money to enact the new law.

That the federal government would shut down for the second time in 14 months if the law isn't finalized by Thursday makes meaningful debate on the issue logistically impossible.

When reports of the House GOP plan to insert language blocking D.C.'s marijuana law made headlines last week, the district's delegate in Congress, Eleanor Holmes Norton (D), promised she would begin "working around the clock to protect the District of Columbia's right to home rule."

But the Home Rule Act, passed by Congress in 1973 and approved by voters in a subsequent referendum, is limiting and only allows D.C. to elect a mayor and council. The federal government retains the power to review "all legislation passed by the Council before it can become law and retains authority over the District's budget," according to the council's website. In this case, Congress is using its budgetary control to purposefully scuttle a democratically-approved marijuana law.

Norton's campaign is further hampered by the simple fact she does not have a vote in either chamber of Congress, making Washington the only city in America without even nominal representation in — yup — Washington. Without an actual vote to leverage, Norton is pretty much hamstrung in any kind of heated legislative debate.

"If they put it in there," Reid told reporters, "it's going to be hard to take it out over here." He'll be relegated to minority leader when Republicans take control of the Senate in January, and he's not going to allow another government shutdown to defend marijuana legalization.

The activists and politicians who helped bring legalization up for a vote are understandably infuriated.

"It's totally disturbing; it's entirely undemocratic," Adam Eidinger, a leading local marijuana advocate, told the Washington Post. "I'm ready for some civil disobedience. If you're going to overturn an election, you might as well say something before it's done."

Tom Angell, chairman of the group Marijuana Majority, is hoping to seize on a potential legal loophole. He told the Huffington Post that experts he'd spoken to were split on how the language in the bill would be read. "It all hinges on the definition of the word 'enact,'" he said.

But limited support among federal lawmakers for any kind of marijuana legalization, even for medicinal purposes, suggests that advocates are unlikely to get the interpretation they're looking for. Their next best hope is in the courts.

In May, a federal judge rejected a challenge to D.C.'s assault weapons ban, reasoning that "the people of this city, acting through their elected representatives, have sought to combat gun violence and promote public safety. The Court finds that they have done so in a constitutionally permissible manner."

Advocates will likely borrow from that logic in crafting their response. But the opponent this time will be Congress and a narrowly-defined law that is likely to cripple their argument.

The fight for legal weed in Washington, D.C., it seems, will soon be back to square one. And they have a bunch of out-of-town politicians with out-of-touch priorities to thank.