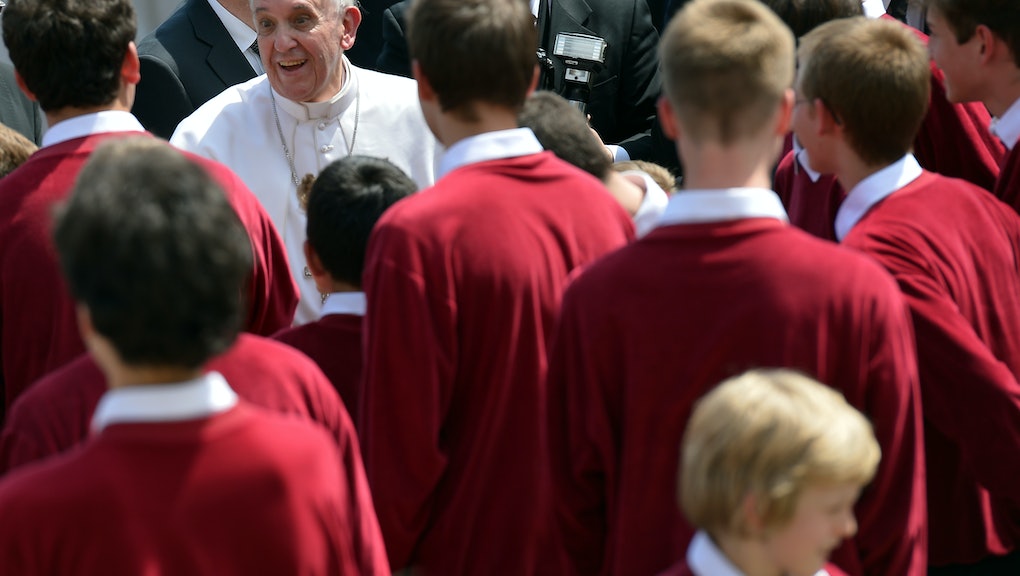 Stand by them. That's the message Pope Francis has for mothers and fathers of gay children, the latest in a series of statements that give the impression the pontiff is gunning for a spot as the grand marshall of the inaugural Vatican City Pride Parade.

"We have to find a way to help that father or that mother to stand by their son or daughter," the pope said in an interview with La Nación, Argentina's leading conservative newspaper. "We come across this reality all the time in the confessional: a father and a mother whose son or daughter is in that situation."

The statement comes on the heels of Francis urging the Roman Catholic Church's top theologians to pay attention to the "signs of the times" when following God's path, and after a collection of bishops considered proposals for wider acceptance of LGBT parishioners by the church (proposals that were later scuttled). Gay marriage, however, is still not up for debate. "Nobody mentioned homosexual marriage at the synod," said Francis. "It did not cross our minds."

An ongoing pattern: It's the latest in a series of "he loves me, he loves me not" statements by Francis. After the resignation of former Pope Benedict XVI, a fire-and-brimstone conservative who called homosexuality "a strong tendency ordered toward an intrinsic moral evil" and an "objective disorder," Western Catholics have been elated by the comparatively gentle rhetoric of Francis. But just because the current pontiff doesn't inspire memes comparing him to the Dark Lord of the Sith doesn't mean that each of his progressive statements about gays haven't been undercut by his own actions, or those of the Church.

The Catechism of the Catholic Church, a summary of official doctrine published in 1992, states that gays "must be accepted with respect, compassion and sensitivity", and that "every sign of unjust discrimination in their regard should be avoided." Put in that 22-year-old context, Francis' declaration that parents shouldn't kick their gay or lesbian children out of the house doesn't seem all that revolutionary. While the style of communication has changed, the substance of the doctrine is functionally identical.

The pope launched a pocket T-shirt industry when he rhetorically asked "Who am I to judge?" in response to a question about gay priests and their place in the church — which the Vatican press office quickly pointed out was not an endorsement of the priests acting on their impulses. (Not that it matters: Estimates of the percentage of priests who are gay range from 23% to 58%, with an even higher percentage for younger clergymen.)

When his native Argentina was on the verge of legalizing same-sex marriage, he even said that the church should be willing to entertain the idea of civil unions between gays — but only as a way to get them to stop pursuing full marriage equality, which, according to the then-cardinal, is the work of the Devil and a "destructive attack on God's plan."

But he can change his words into action: The pope's famous frugality (he lives in a simple apartment in Vatican City instead of the ornate Apostolic Palace) calls for economic justice in an era of skyrocketing inequality, and his literal embracing of religious leaders and followers of other faiths have been lauded by observers after the amiable but out-of-touch papacy of John Paul II and the reactionary leadership of Benedict XVI.

But the current pope's charisma has distracted critics who might see the church's continued complicity with the subjugation and humiliation of gays around the world for what it really is. In the La Nación interview, Francis was pressed about the "collapse" of "traditional values" should the church move toward more conspicuous enforcement of doctrine requiring respect, compassion and sensitivity for its gay members. His dismissive response to the question ("I am not afraid because it is the road that God has asked us to follow") is a good indicator that he's not personally more homophobic than the average septuagenarian Argentinian man.

It just might be time for him to actually act on all those inspiring words.