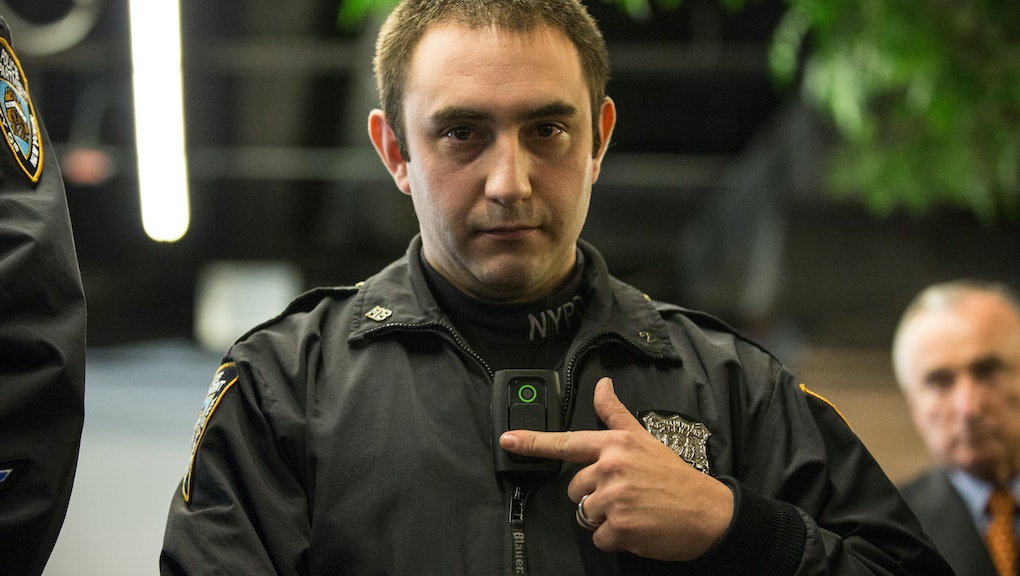 Body cameras will save us.

That's the narrative we've been fed over and over again since Ferguson, Missouri, Officer Darren Wilson killed 18-year-old Michael Brown on Aug. 9. It also informs President Obama's $75 million plan, a measure he announced with much fanfare Dec. 1 to equip 50,000 police officers with recording devices (presumably to lend visual evidence in cases of officer misconduct).

There's just one wrinkle in the enthusiastic mainstream reception that is just now starting to gain traction: Little evidence shows that they actually work. But a new investigation by Fusion reveals something even more damning: The group that benefits most from these cameras aren't people seeking justice for their slain loved ones at all.

That's a tough pill to swallow, but consider this: Data collected from five departments — Albuquerque, New Orleans, Salt Lake City, Oakland and Fort Worth — reveals that in most cases, the primary effect of body cameras was merely to reduce the number of citizen complaints against officers, reportedly by as much as 50%.

This is partly a good thing, in that it helps eliminate frivolous or unfounded gripes that waste department time and resources. But it doesn't really help the Michael Browns of the world. In the case of Albuquerque, for instance, there's been almost no drop in the number of officer-involved shootings since cameras were introduced to the department in 2010.

Not to mention, when such shootings do occur, there's often little evidence that they even took place. That's because no matter how many cameras are out there, officers still control the "record" button; many use this to their advantage, obscuring visual evidence in defiance of department regulations.

What's more, this practice typically goes unpunished, Fusion reports, allowing it to proliferate. In New Orleans, for instance, cameras (both of the body and dashboard variety) were not used in 60% of "use of force" incidents documented between January and May 2014. In Salt Lake City this year, body cameras captured just one of the nine reported use of force incidents. And in Albuquerque in 2013, police failed to follow their department's camera policy a staggering 60 times.

That Albuquerque number stands at 28 this year — a figure best illustrated by the case of Officer Jeremy Dear, who has "failed" (read: "declined") to record at least four use-of-force incidents he's been involved in, most notably the April 22 shooting of 19-year-old Mary Hawkes. Dear was fired Monday for "insubordination and untruthfulness," the Albuquerque Journal reports. But such punishment is rare.

A glimmer of hope lies in two widely cited cases: Studies on Rialto, California, and Mesa, Arizona, suggest that use of force incidents and citizen complaints have fallen dramatically since body cameras were introduced, according to the New Yorker. But even this "civilizing effect" (officers modifying their behavior when they know they're being recorded) has its limits.

Because true justice, the kind protesters and activists across America are clamoring for in the streets, lies in what happens after the recording goes public. Many of us watched in horror as NYPD Officer Daniel Pantaleo choked 43-year-old Eric Garner to death in July — and that was on camera. He got away with it anyway, after a grand jury decided not to indict him.

So even if body cameras didn't disproportionately help the police, they still wouldn't end the systemic racism and overall trigger-happiness that lets officers get away with killing people in the first place. That's the main problem here. And unfortunately, it'll take more than a $75 million check to solve it.