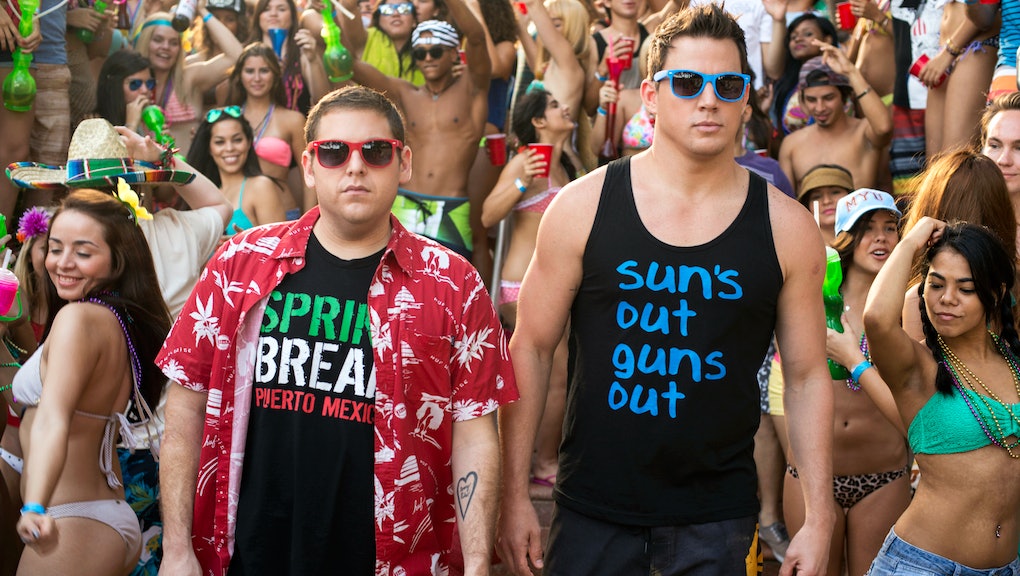 The news: According to emails from Sony Pictures leaked onto the Internet this week by hackers and obtained by the Wall Street Journal, executives like motion picture chief Amy Pascal are openly discussing a future crossover movie merging the Jump Street and Men in Black franchises into one mega-hit.

According to the Journal, Phil Lord and Chris Miller (directors of 21 Jump Street and 22 Jump Street) have already signed on to direct the new movie. The emails indicate the production is well under way and the film is expected to hit theaters by 2016-2017.

However, while this may just seem like a strange anomaly of cross-over randomness, it's very possible this kind of thing could be the future of movies.

The films: The mega-popular Jump Street series stars Channing Tatum and Jonah Hill as a pair of idiotic, neurotic and irresponsible police officers attempting to infiltrate high school and college drug rings. As you can see in the clip below — where a 30-something white Tatum manages to punch a gay black teenager within minutes of arriving on campus — they're almost as bad at their jobs as the cops from Superbad.

The also-very-popular Men in Black series stars Will Smith, Tommy Lee Jones and Josh Brolin as odd-couple partners working for a top-secret government program attempting to conceal the existence of extraterrestrial life. In this clip from Men in Black 3, it becomes a little more clear there's plenty of opportunities for interaction between MIB agents and clueless local law enforcement:

So where do these two series meet? According to certain retrieved emails, the cross-over film will focus more on the Jump Street characters, rather than the MiB characters, who may not even have any roles at all.

Maybe Tatum and Hill will be attempting to bust a drug gang that's actually run by aliens. Or the two accidentally see a UFO while undercover and attempt to conceal their identities as police officers from the MIB officers covering it up. Who knows?

The next step in movie-making? The plot doesn't really matter so much as the opportunity to win over fans of both franchises into one mega-movie. The Journal reports:

In addition to providing an unexpected follow-up to a hit, Sony executives say in e-mails that they hope the crossover will reinvigorate "Men in Black." 2012's "Men in Black 3" grossed $624 million worldwide, but lost money for the studio and did not excite fans for a quick follow-up.

This makes total sense from a financial perspective. Considering the huge worth of the MiB series (about $1.655 billion in worldwide box office), Sony might be loathe to just give up a cash cow. It would also take Jump Street in an unexpected if risky direction that could prevent the inevitable sequel fatigue.

And there's already a precent for a universe cross-over. Disney's Marvel Studios has grossed over $7 billion dollars worldwide with its Marvel Cinematic Universe franchise, so it's also an obvious time for other studios to take interest in building lucrative crossovers. However, at least those characters exist in the same universe, if different parts of it. In this case, Sony executives are basically hoping this is just crazy enough to work.

If this crossover actually happens and is successful, studios may have found a temporary antidote to growing frustration with the movie industry's unending parade of bad, unnecessary sequels and remakes. Though this has been a go-to in Hollywood for several years, the tendency to just remake an old movie may have finally run its course, and crossovers could be the next silver screen fad.

However, in many cases, forcing two films or franchises together may just be too contrived for the audience to buy it, and the idea could burn itself out before it even starts cooking.

Either way, they're gonna have to come up with new ideas eventually, because otherwise we're going to have Garfield Meets the Smurfs in 3D IMAX and there will be no point to the continued existence of humanity anymore.