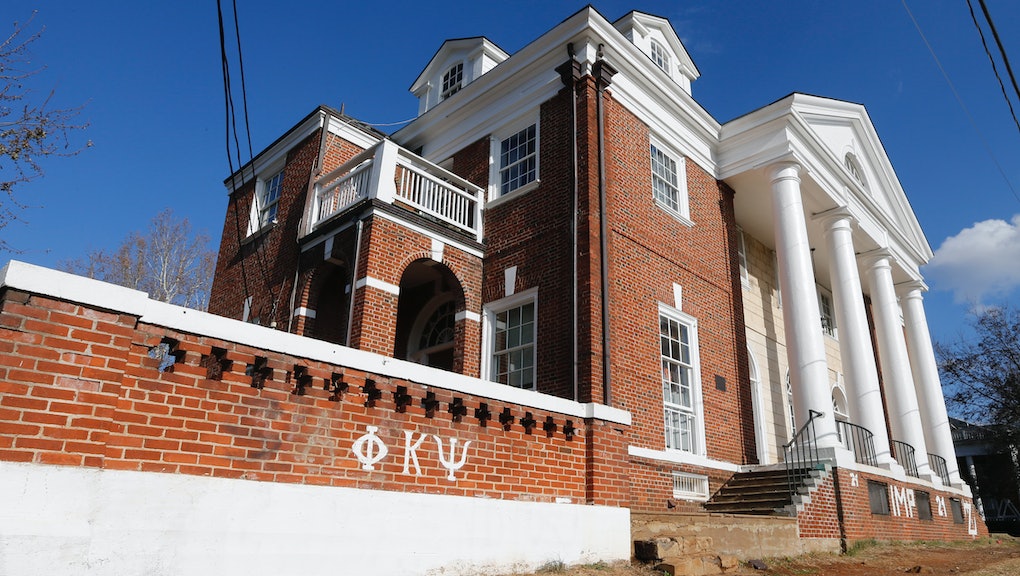 On Wednesday, the Washington Post published a lengthy story examining a number of the increasingly vague details of the now infamous Rolling Stone article "A Rape on Campus: A Brutal Assault and Struggle for Justice at UVA."

After being published shortly before Thanksgiving, the story of rampant rape at the University of Virginia gained a lot of attention, but reports soon after appeared questioning the veracity of Jackie's story, the main woman identified in the article. Since then, the Post interviewed a number of people involved in the original Rolling Stone article and looked into several details of the case. And unfortunately, it appears, Jackie's story is only getting more complicated.

The Post reports that Jackie's friends grew suspicious of her allegations because of her details about the attacker.

They said the name she provided as that of her date did not match anyone at the university, and U-Va. officials confirmed to The Post that no one by that name has attended the school.

And photographs that were texted to one of the friends showing her date that night actually were pictures depicting one of Jackie's high school classmates in Northern Virginia. That man, now a junior at a university in another state, confirmed that the photographs are of him and said he barely knew Jackie and hasn't been to Charlottesville for at least six years.

As it turns out, neither the man Jackie described, nor another possible attacker matching that description attended UVA. Furthermore, when Jackie later divulged more details to her friends who'd initially found her the night of her attack, several more specifics had changed.

Last week, Jackie for the first time revealed a name of her alleged attacker to other friends who had known her more recently, those recent friends said. That name was different from the name she gave Andy, Cindy and Randall that first night. All three said that they had never heard the second name before it was given to them by a reporter.

One of the pivotal points in the original Rolling Stone article chronicled Jackie's friend's handling of the situation immediately after she found them and told them about her rape. As described by Rolling Stone, they reacted nonchalantly, seemingly more concerned with their young social status at the school than their friend's well-being.

The group looked at one another in a panic. They all knew about Jackie's date; the Phi Kappa Psi house loomed behind them. "We have to get her to the hospital," Randall said.

However, the friends told the Post something quite different.

The friends said they never were contacted or interviewed by the pop culture magazine's reporters or editors. Though vilified in the article as coldly indifferent to Jackie's ordeal, the students said they cared deeply about their friend's well-being and safety. Randall said that they made every effort to help Jackie that night.

They also said Jackie's description of what happened to her that night differs from what she told Rolling Stone. In addition, information that Jackie gave the three friends about one of her attackers, called "Drew" in Rolling Stone, differed significantly from details she later told The Post, Rolling Stone and friends from sexual assault awareness groups on campus. The three said Jackie did not specifically identify a fraternity that night.

In the Rolling Stone story, author Sabrina Rubin Erdely described how Jackie met "Drew" while working together at the university pool. However, while the man whose name is similar to the one Jackie used for her attacker did work at the pool, he never met Jackie or had taken her out on a date. He was also not a member of the Phi Kappa Psi fraternity to which Jackie's attacker belonged and at which the rape was said to have taken place.

That said, the Post reports that Jackie's friends did notice she began a texting relationship with an upperclassman shortly into the school year. However, the details surrounding this relationship and the eventual date that came out of it are also hazy.

Jackie told her three friends that she accepted the upperclassman's invitation for a dinner date on Friday Sept. 28, 2012.

When the Post looked further into these details, a number of other inconsistencies emerged.

U-Va. officials told The Post that no student by the name Jackie provided to her friends as her date and attacker in 2012 had ever enrolled at the university. Randall provided The Post with pictures that Jackie's purported date had sent of himself by text message in 2012.

However, not everything the Post found contradicts Jackie's original story. In interviews with Jackie's friends and classmates, the Post found that many people noticed a dramatic change in Jackie's demeanor and personality after the night of her attack.

But while it's unfortunate that the fuzzy details and inaccuracies emerging from this case may set back our national conversation on campus rape, the message remains clear.

"The main message we want to come out of all this is that sexual assault is a problem nationwide that we need to act in preventing," UVA junior Alex Pinkleton, a sexual violence peer advocate who survived a rape and an attempted rape her first two years on campus and is a close friend of Jackie's, told the Post.

"It has never been about one story. This is about the thousands of women and men who have been victims of sexual assault and have felt silenced not only by their perpetrators, but by society's misunderstanding and stigmatization of rape."