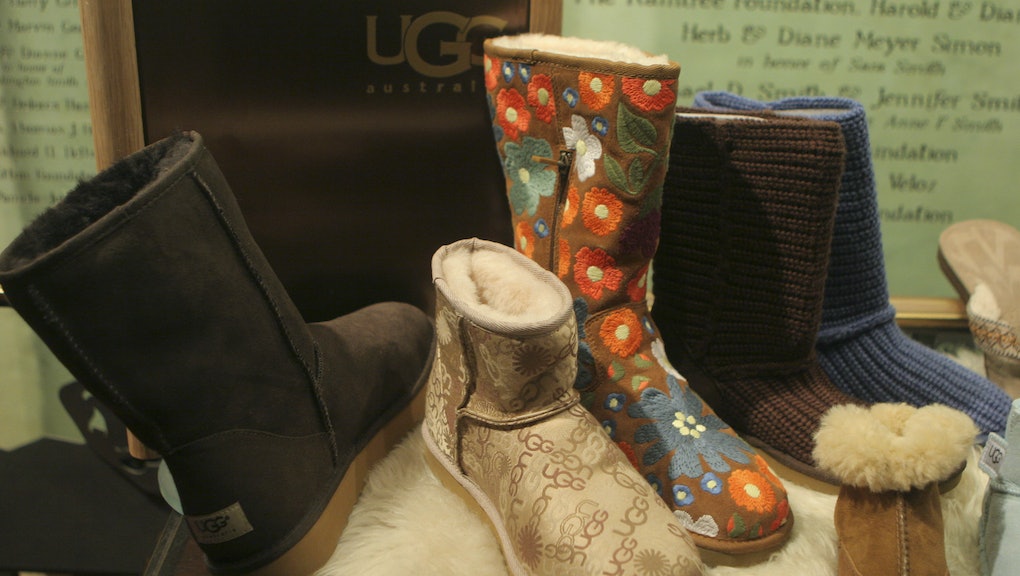 Why We Can Finally Feel Good About Our UGG Boots

Fashion trends come and go, but clothing staples stay in our closets forever.

That's one lesson L.L. Bean might do well to remember. As Bloomberg Businessweek reported Wednesday, the brand's famous "Duck" boots are suddenly booming in popularity, likely from shoppers who are after the boots' "lumbersexual" aesthetic rather than their functionality. Once the trend for rugged workwear passes, L.L. Bean can feel safe knowing their boots will remain favorites of the loggers, farmers and other outdoorsy types who buy over 100,000 pairs each year to fill their basic winter needs.

Need proof staples trump trends? Look no further than UGG boots. The much-reviled shoes were the hottest trend of the early aughts, skyrocketing after Oprah put them on her 2001 list of "favorite things." But as the Business of Fashion reported recently, the frenzied popularity has tapered off — and yet UGG sales have remained solid by becoming a winter staple.

In October, UGG Australia parent company Deckers reported a nearly 24% sales increase for a cool $417 million for the quarter. The increase reflects solid growth over the past five years; in 2013, total sales reached close to $1.3 billion.

A look at Google searches support those sales numbers. While the shoes' popularity has seen spikes, interest in Uggs, as they're colloquially known, have held steady for years.

This year is no different. We may hate on them, but we're still buying them. On Cyber Monday this year, "UGG" was the most searched term online for the third year in a row, Deckers reported last week.

That's because Uggs are no longer a fashion trend — they're a winter necessity. Connie Rishwain, president of UGG Australia, told Business of Fashion, "We don't think of ourselves as just a trendy brand. ... We're a little fashion foolproof in that regard."

Stylist and fashion consultant Kate Schelter told the Huffington Post, "They have become the winter flip-flop. A banal essential that people cling to out of comfort and freezing temperatures."

It's the best news cold-footed shoppers have heard in years. Many of us who enthusiastically begged our parents for Uggs in the early 2000s have since become ambivalent Ugg wearers, at once committed to and ashamed by our love for the sheepskin boots. They're undeniably warm, a fact proven by their origin as footwear for pilots, who kept their feet protected in unpressurized cockpits with sheepskin boots.

Uggs are no longer stylish, but they're also no longer painfully uncool. Actress Elisabeth Moss was spotted wearing a pair this year on the streets of New York City, and they're still seen on feet around their unofficial home city, Los Angeles. As the trend for boots shifts to rugged styles like Duck boots or sleek ankle booties, UGG has successfully shifted away from being a trend at all.

Instead, Uggs are just what we wear when it gets cold. Last year's epic snowstorm brought hoards of people to UGG's New York City stores, and this year's cold temps have already resulted in brisk sales.

Like Duck boots and rain galoshes, Uggs have finally become what we always knew they were but didn't want to admit: a winter necessity. This year, feel free to buy a brand-new pair with no shame.