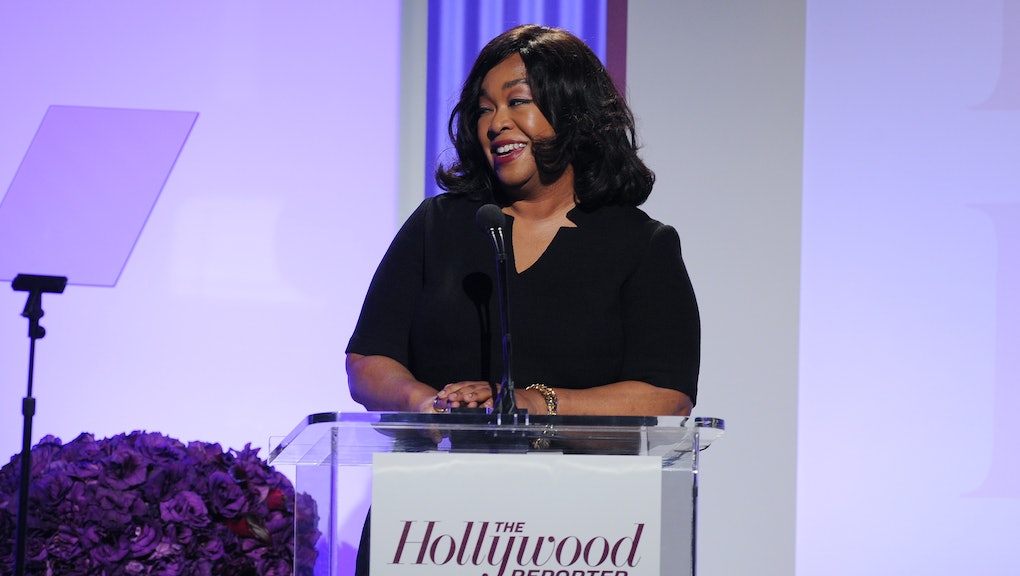 Shonda Rhimes has once again proved that she is a leader and inspiration in the entertainment world.

At the Hollywood Reporter's Women in Entertainment breakfast on Wednesday, the writer and producer received the Sherry Lansing Leadership Award for her groundbreaking work in accurately depicting women, people of color and LGBT characters on television. Her shows Grey's Anatomy and Scandal, along with How to Get Away With Murder, of which she is the executive producer, feature multifaceted characters with careers, love lives and three-dimensional storylines. Most importantly, they're not all about straight white guys.

Rhimes doesn't just make her characters talk the talk — she walks the walk in real-world support of equality. She recently called out a New York Times critic who called her an "angry black woman," and shut down homophobes on Twitter.

While Rhimes has a lot to be proud of, her speech focused on trailblazers before her that helped break through Hollywood's glass ceiling. Rhimes acknowledged that her work is only possible thanks to the women who have shattered the barrier: "There are a lot of women in Hollywood in this room who have the game-changing ability to say yes or no to something. Fifteen years ago, that would not have been as true."

"When my publicist called to tell me that I was receiving this honor, I screwed up my face and I said, 'Are you sure? Me?' And he said, 'Yes.' And I said, 'Why?' And then I said, 'No really, why?!' And I made him call and ask for some written reason why I was getting this award. Because I really and truly was worried that there might have been some kind of mistake.

"So, no really, why?! They sent a written reason why I was getting this award. It said many nice things but the main thing that it was said was that I was getting the award in recognition of my breaking through the industry's glass ceiling as a woman and an African-American.

"Well. I call my publicist back. Because I just don't know about this. I mean, I'm concerned now. I know this isn't an award because I'm a woman or because I'm African-American. I come from a very large, very competitive family. Extremely competitive. And by competitive, I mean, my mother says we're not allowed to play Scrabble anymore when we get together because of the injuries and the tears. One of the rules in my family is you don't ever get a trophy for participation, you don't get a trophy for just being you. So getting an award today because I'm a woman and an African-American feels ...

"I was born with an awesome vagina and really gorgeous brown skin. I didn't do anything to make either of those things happen. To get all Beyonce about it, people: "I woke up like this." Seriously. I know this isn't an award because I'm a woman or because I'm African-American. I know that it's really about breaking the glass ceiling that exists in the face of being a woman and being black in this very male, very white town.

"I was born with an awesome vagina and really gorgeous brown skin. I didn't do anything to make either of those things happen. If I'd broken the glass ceiling, that would mean I would have made it through to the other side. Where the air is rare. I would feel the wind on my face. The view from here — way up here where the glass ceiling is broken — would be incredible. Right? So how come I don't remember the moment? When me with my woman-ness and my brown skin went running full speed, gravity be damned, into that thick layer of glass and smashed right through it? How come I don't remember that happening?

"Here's why: It's 2014. This moment right here, me standing up here all brown with my boobs and my Thursday night of network television full of women of color, competitive women, strong women, women who own their bodies and whose lives revolve around their work instead of their men, women who are big dogs, that could only be happening right now.

"Think about it. Look around this room. It's filled with women of all colors in Hollywood who are executives and heads of studios and VPs and show creators and directors. There are a lot of women in Hollywood in this room who have the game-changing ability to say 'yes' or 'no' to something. Fifteen years ago, that would not have been as true. There'd have been maybe a few women in Hollywood who could say 'yes' or 'no.' And a lot of 'D' girls and assistants who were gritting their teeth and working really hard. And for someone like me, if I was very, very, very lucky, there'd have been maybe one small show. One small shot. And that shot would not have involved a leading actress of color, any three-dimensional LGBT characters, any women characters with high-powered jobs and families, and no more than two characters of color in any scene at one time — because that only happened in sitcoms.

"Thirty years ago, I'd think maybe there'd be a thousand secretaries fending off their handsy bosses back at the office and about two women in Hollywood in this room. And if I were here, I would serving those two women breakfast. Fifty years ago, if women wanted to gather in a room, well it had better be about babies or charity work. And the brown women were in one room over there and the white women were in a room over here. From then to now, we've all made such an incredible leap. Think of all of them.

"If I had broken through a glass ceiling, I would have felt some cuts, I would have some bruises. I'd have wounds. Fifty years ago, trying to get out of separate rooms, 30 years ago trying to not serve breakfast or be groped by their bosses, 15 years ago trying to make clear that they could run a department as well as that guy over there. All the women, white or black or brown who woke up like this, who came before me in this town. Think of them. Heads up, eyes on the target. Running. Full speed. Gravity be damned. Toward that thick layer of glass that is the ceiling. Running, full speed and crashing. Crashing into that ceiling and falling back. Crashing into it and falling back. Into it and falling back. Woman after woman. Each one running and each one crashing. And everyone falling.

"And I ran. So that when it was my turn to run, it didn't even look like a ceiling anymore. I mean, the wind was already whistling through. I could always feel it on my face. And there were all these holes giving me a perfect view to other side. I didn't even notice the gravity, I think it had worn itself away. So I didn't have to fight as hard, I had time to study the cracks. I had time to decide where the air felt the rarest, where the wind was the coolest, where the view was the most soaring. I picked my spot in the glass and called it my target.

"And I ran. And when I hit finally that ceiling, it just exploded into dust. Like that. My sisters who went before me had already handled it. No cuts. No bruises. No bleeding. Making it through the glass ceiling to the other side was simply a matter of running on a path created by every other woman's footprints. I just hit at exactly the right time in exactly the right spot.