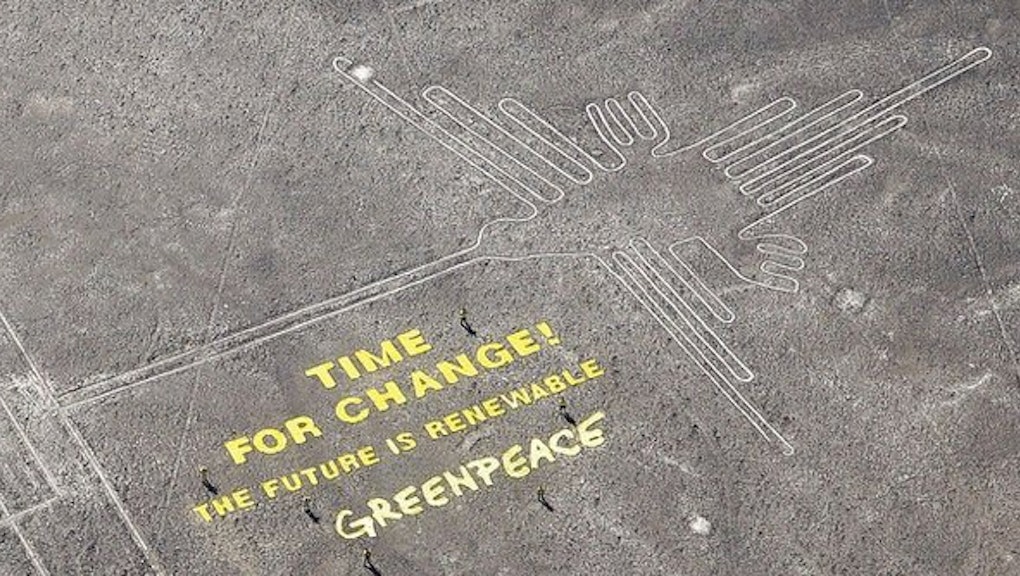 Greenpeace Just Defaced a Holy Monument for a Publicity Stunt

Maybe they should stick to harassing whaling ships.

Greenpeace, the environmentalist non-governmental organization with the goal of "peaceful protest and creative communication to expose global environmental problems," has pissed off its fair share of petroleum companies, whalers and creators of starvation-ending superfoods over the decades, but a publicity stunt in South America has angered a new foe: the Peruvian government.

Peru is seeking criminal charges against Greenpeace activists who damaged the famous Nazca Lines Monday by trampling the adjacent desert during the creation of a banner telling U.N. delegates — or, at least, people who happened to be flying in nearby helicopters — "Time for Change: The Future is Renewable." The Nazca Lines, enormous geoglyphs depicting stylized plants, animals and humans scratched on the surface of the Peruvian desert, are more than 1,500 years old and extremely fragile.

"They are black rocks on a white background. You walk there and the footprint is going to last hundreds or thousands of years," Deputy Culture Minister Luis Jaime Castillo told the Associated Press. "And the line that they have destroyed is the most visible and most recognized of all."

The Nazca Lines were designated a U.N. World Heritage Site in 1994, which might dampen the enthusiasm of the stunt's intended target: delegates from 190 countries at U.N. climate talks being held in Lima, the capital of Peru.

Greenpeace, for its part, is super sorry. "We fully understand that this looks bad," the group said in a statement. "We came across as careless and crass." (Came across?) Greenpeace executive director Kumi Naidoo plans to travel to Lima this week to apologize to the Peruvian government and is "willing to face fair and reasonable consequences," the statement said.

Those consequences may be severe. Peru is attempting to prevent the activists responsible from leaving the country, and Castillo has asked prosecutors to file charges of "attacking archaeological monuments," a crime punishable by up to six years in prison.

According to Castillo, not even the country's president is allowed in the location Greenpeace trespassed on without authorization, and those who do must wear special shoes to avoid leaving footprints on the desert. The plateau on which the Nazca Lines are located is dry, windless and climatically stable, meaning that, when they're not being trampled on, the geoglyphs last for millennia.

"Peru has nothing against the message of Greenpeace. We are all concerned about climate change," Castillo said. "But the means doesn't justify the ends."

This isn't the first time Greenpeace has damaged its own cause — or bent the law to do it. While protesting a Scottish oil company's operations off the coast of Greenland in 2010, many activists used their time off to proselytize to native Inuit children the moral hazards of eating whale or seal meat. This alienated locals — it's not like there's a Trader Joe's nearby — and it led to a public relations win for the oil company. In March, nine Greenpeace activists were arrested for unfurling banners from the roof of the Procter & Gamble headquarters to protest the use of palm oil.

Greenpeace's goal — to raise awareness of climate change — is a noble one. Peru, in particular, faces numerous threats to its people, its rainforests and its coastlines from climate change, hence the location of the U.N.'s climate delegation. But ruining ancient monuments and draping banners to "raise awareness" of an issue that nearly everyone on Earth is already aware of doesn't serve to address that cause — it just serves Greenpeace's.