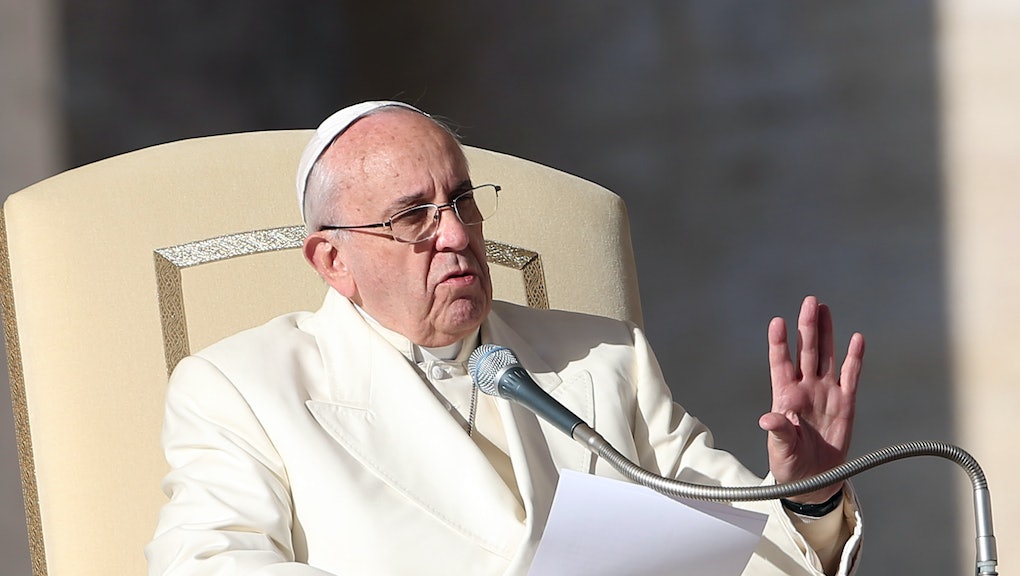 Pope Francis gave the world some serious shopping tips to consumers and businesses on Wednesday: Don't buy, produce or distribute products made by "modern-day slaves," regardless of whatever the savings may be.

"This abominable phenomenon, which leads to contempt for the fundamental rights of others and to the suppression of their freedom and dignity, takes many forms," Francis said. "I would like briefly to consider these, so that, in the light of God's word, we can consider all men and women 'no longer slaves, but brothers and sisters.'"

The message was part of the pope's annual peace message, which this year focused on the estimated 36 million people still enslaved worldwide. He pressed governments to do more to end the "crime against humanity" by introducing strong laws and policies to prevent trafficking and protect its victims.

But while governments' attention to those laws and to "laws governing migration, employment and adoption" are key to ending slavery, the responsibility rests on more than just that. Francis said that businesses also need to be wary of not using distribution chains that use slave labor.

"Businesses have a duty to ensure dignified working conditions and adequate salaries for their employees, but they must also be vigilant that forms of subjugation or human trafficking do not find their way into the distribution chain," he said.

Francis argued that it's not just those who wield political or economic power that contribute to the longevity of slavery around the world. As the pope called for the end of slavery, he reminded consumers and companies that their complicity contributes to the continuation of slave labor and trafficking, especially in the holiday season of shopping frenzies and sales galore.

The background: This speech falls in line with many religious leaders' plan to put an end to slavery once and for all by 2020. After the pope witnessed the atrocity of slavery and prostitution firsthand during his ministry in Argentina, this issue became "a cornerstone of his pontificate."

And he hasn't been shy about championing the issue. He has publicly expressed his "distaste for large banks, income inequality, the trickle-down system and the basic tenets of capitalism." As he once again said in his speech about slavery on Wednesday, he feels that ethics have largely gone missing in the financial sector of the world and need to reappear.

"It is increasingly intolerable that financial markets are shaping the destiny of peoples rather than serving their needs, or that the few derive immense wealth from financial speculation while the many are deeply burdened by the consequences," he said at a Vatican conference on ethical investments in June.

"Purchasing is always a moral – and not simply an economic – act."

He makes a good point. When we value money before our fellow humans, we oftentimes perpetuate unethical behavior. The desire for profit and purely economic decision-making essentially helps to justify an economic system (the religion of capitalism) that can lead to slavery, servitude, poverty and destitution. Profit-seeking companies and slavery, while separated by supply chains and TPS reports, are closely related: Francis argued that a "common source of slavery is 'corruption on the part of people willing to do anything for financial gain.'"

The pope's words are important to consider, especially in the consumer frenzy of the holiday season. Saving a few bucks may seem like a tempting offer, but that's not really what the holiday spirit is about.