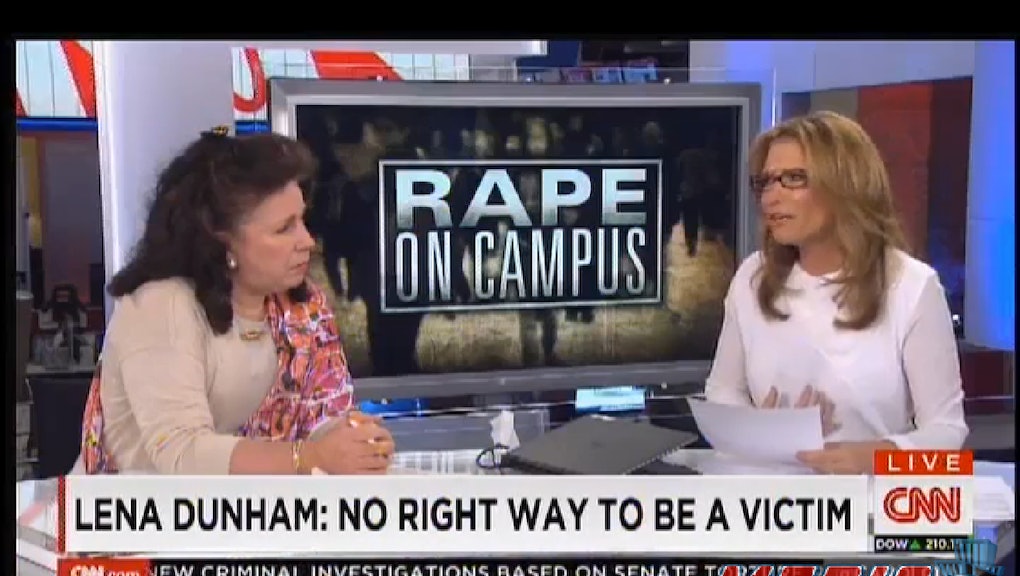 CNN Interviewed the "Princeton Mom" About Rape, and It's Even More Disgusting Than We Expected

As if there wasn't enough destructive rhetoric about rape victims after Rolling Stone monumentally screwed up the magazine's blockbuster gang rape exposé at the University of Virginia, someone decided to ask Susan Patton, one of the world's most infamous mothers, for her opinion.

And it went just as terribly as you would expect.

During an interview with CNN's Carol Costello, Patton — aka "Princeton Mom" and the author of Marry Smart, a book advising college women to focus their energies on finding a husband — was asked to "weigh in" on the subject of campus sexual assault. The result was disastrous.

In a train wreck of a segment, Patton said rape is "sort of" hard to talk about, not because it is traumatic for survivors, but because "any conversation about sex is a bit difficult." This logic, besides being superficial, creates the deeply problematic implication that rape and sex are essentially synonymous.

Patton then takes a page out of the trusty Todd Akin playbook to claim certain forms of rape are more legitimate than others, i.e. the ones with weapons.

"The definition of rape is no longer when a woman is violated at the point of a gun or a knife," she said almost nostalgically. "We're now identifying as rape what really is a clumsy hookup melodrama or a fumbled attempt at a kiss or caress."

Why cable news channels continue to frame Patton as a voice on issues that affect women is baffling.

After being told that victims often know their abusers, Patton attempts to argue that this should make women safer. "Why don't women get up and leave?" she asks rhetorically as Costello tries to pretend she's not talking to a shawl and brooch-wearing lunatic.

Of course, keeping a straight face isn't necessary on the Internet.

In the very backward world of Princeton Mom, rape victims should be viewed skeptically, and preventing assault is the responsibility of the victim, not the perpetrator. Similarly, if you regret your rape, then it must be your fault. "I'm suggesting that women be smart for themselves, remain sober enough to extricate themselves from a situation that’s headed in a direction they’re not comfortable with," she said.

But it's OK because she finished by saying, "I'm not blaming victims." So we're good?

Perhaps most worrying about Patton's ignorant, rape-apologist arguments is that she's not alone in voicing them. Earlier this year columnist George Will proclaimed that rape victims have a "coveted privilege," and a judge asserted that some victims are more worthy than others.

Sadly, this idea that some women are to blame for their rapes has widespread consequences — it's part of what leads most victims to never report their rape. Shame shouldn't be placed on survivors who come forward with their stories of abuse, it should be reserved for the people who perpetuate falsehoods about rape. The fact that Patton prefers to give rapists the benefit of the doubt should disturb anyone who cares about survivors, not to mention our acclaimed justice system.