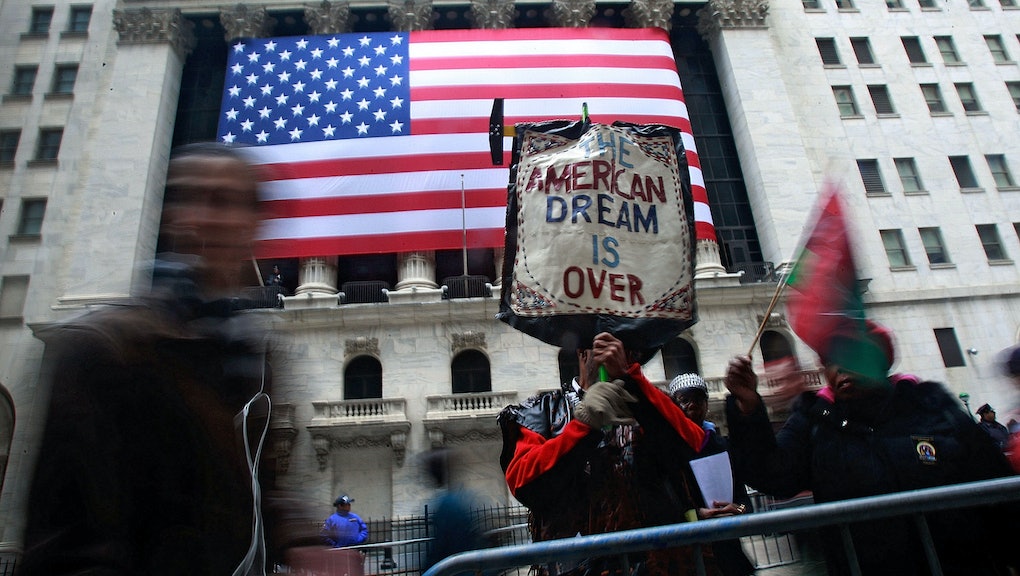 Can you still get rich through hard work in America? Or is "rags to riches" a self-destructive myth?

According to a new poll by the New York Times, the good news is that Americans don't appear to have lost their optimism entirely. Up to 64% of Americans still believe it is "possible to start out poor in this country, work hard and become rich."

The bad news is that this was the lowest number of Americans who agreed with that statement in the past two decades (despite, as Gawker's Hamilton Nolan points out, its "inexcusably pro-American phrasing"):

Even near the depth of the financial crisis in early 2009, 72% of Americans still believed that hard work could result in riches.

The sad part is that the pessimists are actually right. Current-day America has developed an entrenched class system that hasn't existed since the Roaring Twenties. Earlier this year, the Washington Post used data from Federal Reserve Bank of Boston economists Richard Reeves and Isabel Sawhill to develop this alarming chart demonstrating that poor kids who get college degrees don't tend to do better than rich high-school dropouts.

So much for the myth of a meritocracy. In fact, even a college education (once the ticket to a comfortable middle-class lifestyle) doesn't appear to be doing much for the average Jack and Jill anymore. In keeping with that, this chart from the U.S. Census Bureau shows how much less today's college grads make compared to past generations:

It's bad enough that Millennials are widely perceived as the first generation to do worse than their forebears. But there's also a simple explanation.

Since the Recession, though, middle-class and poor families have barely recovered, and their incomes have continued to stagnate. Meanwhile, economists Emmanuel Saez and Thomas Piketty have demonstrated that the ultra-wealthy have sucked up virtually all of the economic gains since:

This isn't a new phenomenon, but it's one that is speeding up. All told, Piketty and Saez estimated the superrich 1% have sucked up 95% of all income gains since the end of the Recession.

In a more recent estimate, Saez and colleague Gabriel Zucman found that their prior research probably understated just how far the rich have taken control of the nation over the past few decades. The top 0.1% now control 22% of all American wealth, while the even smaller 0.01% of richest Americans (approximately 16,000 families) control 11.2%.

If this trend continues without correction, the results will be disastrous. But Congress doesn't care. In fact, right now they're attempting to gut the Dodd-Frank law, which was intended to prevent banks from pursuing the type of risky trading practices that led to the Great Recession in the first place.

It's nice that 65% of Americans told the Times they still believe the system can work, but frankly our economic system has become so stratified that the low-income hard worker who gets rich off the fruits of his labor is by far the exception. Most Americans are getting poorer, not richer, despite working some of the longest hours among advanced democratic countries. Unless something changes quickly, in a few decades the American dream will be little more than a fading memory.