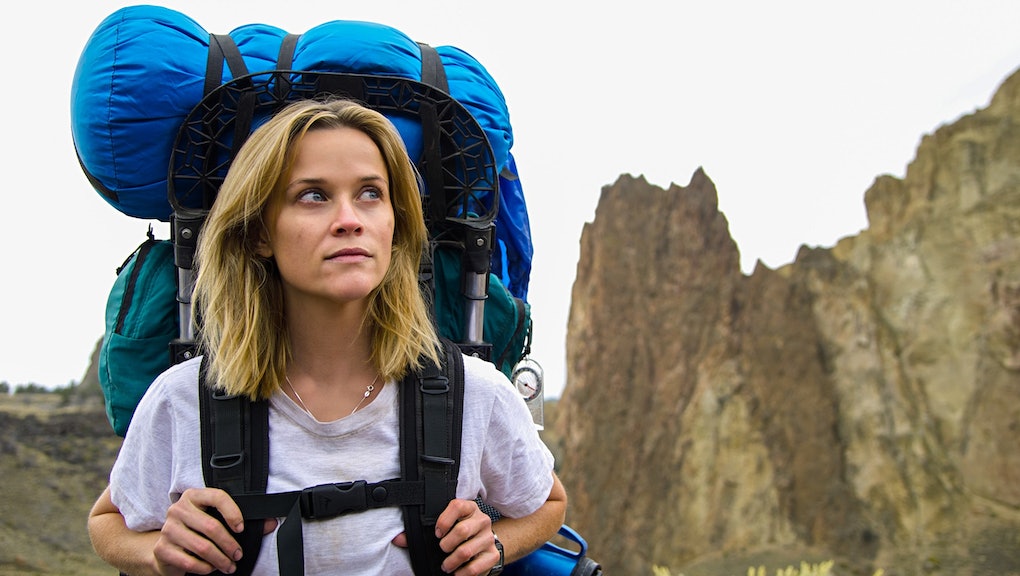 Why Every Man Should See 'Wild'

As I reassured my mother multiple times throughout my stint abroad, hitchhiking was not a big deal in Namibia, even for a woman. On the contrary, the lack of public transportation and vast distances between towns made it a popular way to get around. Still, I was lucky that the most threatening part of hitching rides by myself was being exposed to the germs of a toddler. I was lucky in the way all women sometimes feel lucky, for the small blessing of moving safely through a world that can feel like it does not belong to us.

Wild, the film adaptation of Cheryl Strayed's best-selling memoir of the same title, reminded me of that feeling. The film follows Strayed, played by Reese Witherspoon, on her 1,100-mile solo trek along the Pacific Crest Trail. It is at once a moving portrait of one woman's grief, an ode to the healing power of nature and a rumination on both the strength and vulnerability of the solitary female traveler.

Strayed meets only one other female hiker on her journey, but comes across plenty of men. They are generally friendly and respectful, but there is nevertheless an undercurrent of unease lurking beneath many of these encounters. The film goes so far as to overtly manipulate the viewer into suspecting lascivious intentions of one of the first men Strayed meets: She finds a gun in the dashboard of his truck while he's off farming, and when he rejoins her later (in a sweat-soaked wifebeater, no less), he makes a suggestive comment about what he likes to do after a hard day's work. In response, an increasingly freaked-out Strayed makes up a husband waiting for her a few miles ahead on the trail.

It's a fake-out (he's just offering her some candy from his secret stash, then takes her home to eat dinner with his wife), but the point is clear: Women traveling alone have more to fear than starvation, rattlesnakes and heatstroke. The vast majority of men are not predators, but women can't always be sure which ones are.

This is hardly a revolutionary idea, but it's a layer of complexity often absent from both male-driven solo-adventure films like Into the Wild and more "civilized" travel romps like Eat Pray Love. More importantly, it's playing to a mass audience at a time when women are becoming increasingly vocal about their sexist treatment in public spaces. As issues like street harassment rise to the forefront of many feminist conversations, society is being forced to acknowledge that these spaces — like sidewalks, buses and offices — are still too often coded as male. The trail is not so different, it seems, and Wild hammers home the ever-present vigilance of a young woman traveling on her own.

Such vigilance may not be something all viewers have experienced. I saw Wild with a male friend, for example, who has also traveled by himself, and who was struck by the film's attention to that aspect of Strayed's journey. He told me how he'd often worried about things like losing his passport or being robbed during his trips, but that the threat of sexual violence, undoubtedly familiar to many women, never really crossed his mind.

For Strayed, that threat most clearly comes to a head in the later portion of the film, when she offers to purify water for a pair of passing hunters. Starting to feel uncomfortable in their presence, she packs up her things and pretends to move along, only to be confronted by one of the hunters shortly thereafter. Her previous kindness is repaid with a creepy comment about her "tight little ass" and the remarkably timely "Can't a guy give a girl a compliment anymore?" Despite the strength she's shown thus far, it is clear that to this man, she is no more than a pretty girl alone in the woods.

Other instances are more subtle. At one point, Strayed is given special treatment by a male campsite worker who lets her pick up a package after hours. A handful of young men who walk in immediately afterward get nothing but dirty looks from the exact same worker, and are allowed to pick up their own mail only after Strayed bats her eyelashes at him.

While her new friends good-heartedly lament their comparative lack of special treatment, the film has done enough by this point to establish that the benevolent sexism Strayed receives is still sexism. Indeed, the campsite worker also repeatedly asks Strayed for a drink; she is treated differently not because she's a human being, but because this man wants to get into her pants.

On its own, such treatment might seem harmless (at least, it might to those who do not have to put up with it all the time). Yet, as we see with the hunters, evaluating women primarily on their potential for male pleasure is part and parcel of a mindset that leads to sexual harassment.

Highlighting these elements of women's travel experience is not discouragement from seeking out solo adventure — Wild is nothing if not a celebration of women's personal strength — but rather an acknowledgement of the way women are sometimes forced to navigate a world that continues to peg them as less capable, and less fully human, than men.

Of course, Strayed has many positive experiences (both platonic and sexual) with men in the film, too. And she told Vogue in 2012 that most people she met on the trail were "incredibly kind and unique."

Rather than admonishing women to be careful, Wild simply presents a peek into the female psyche at a moment when empathy for such a viewpoint is sorely lacking. To quote Strayed's mother, it reminds audiences that women, too, deserve to move freely throughout the world and to put themselves "in the way of beauty" — without being made to fear for their safety.