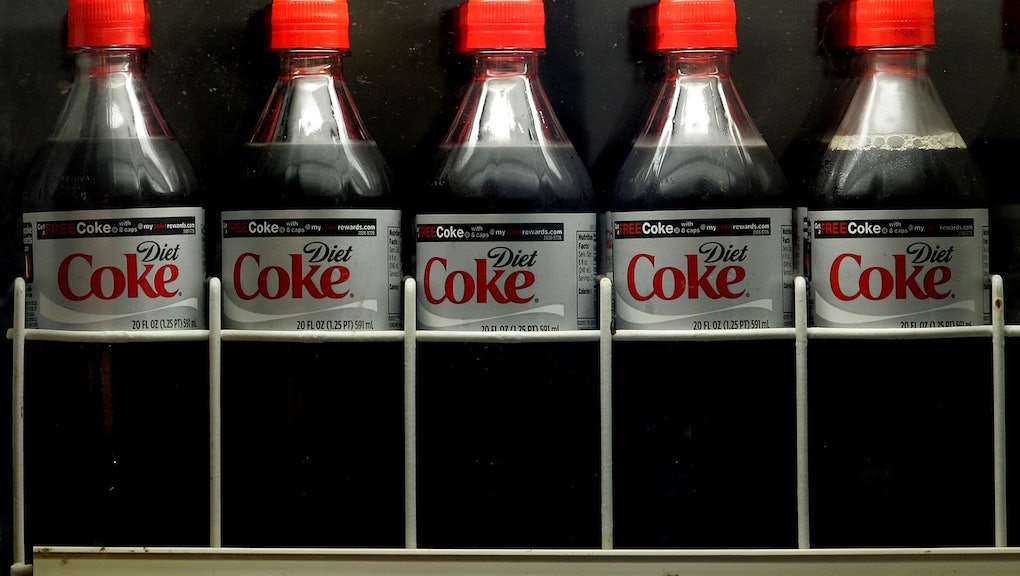 Science Has Terrible News for People Who Swear by Diet Soda

That diet soda you're drinking? Contrary to its name, it's probably making you pack on more pounds than its "full calorie" counterpart. In fact, diet soda falls so flat on its name that Time magazine calls it the "ultimate hypocrite of the beverage world."

According to a 2014 study, Sara Bleich of Johns Hopkins School of Public Health found that people who drink diet soda are actually more likely to be overweight than those who drink regular soda.

Though it may seem counterintuitive, the Bleich's research found that, in the long run, diet soda drinkers actually consume more calories from food than those who drink regular soda. This correlation particularly applies to those who are already overweight or obese.

How in the heck does drinking a calorie-free beverage result in a higher-calorie diet? The reasons are likely both psychological and physical. The artificial sweeteners found in diet colas produce different responses in the body than either sugar-sweetened or non-sweetened beverages, according to recent study by Texas Christian University psychologist Sarah Hill.

This research, published in the journal Appetite, found that artificial sweeteners trigger a craving for sugar but don't end up satisfying it. This means that the next time a high-calorie food shows up, we're more likely to indulge. So while we may be cutting calories when we consume our soda, we'll probably end up eating more food in the long run.

Moreover, artificial sweeteners could have a discernible effect on the stomach's bacteria that alters the digestive process. Although we've yet to find a definitive answer to this hypothesis, some research has suggested that artificial sweeteners can be linked to the development of a glucose intolerance, which in turn messes with the metabolism and could cause weight gain.

Causation or coincidence? While certain studies have made a strong case that drinking more diet soda inadvertently leads to weight gain, it's also very possible that the link is a correlation, rather than a causation.

That said, it's also possible that these two things more together in an unfortunate spiral: Overweight people drink diet soda because they're trying to diet, but those diet sodas are only adding on more pounds, and so on and so forth.

What does "diet" even mean? While the scientific cause has yet to be pinned down precisely, the very idea of the "diet" label is problematic and possibly even hypocritical. Even though diet soda doesn't have any calories and sugar, its other taste-producing additives and the associated psychological effects erase any potential gains from the limited sugar and caloric intake.

And, unfortunately, diet soda isn't the only culprit of this deception. In an increasingly health-conscious America, labels including the words "lite," "lo-cal" and "lo-fat" inundate grocery store shelves. But just like with diet soda, food manufacturers cut out the "bad" stuff, they usually also cut out the taste and try to make up for that with other unhealthy additives like sugar, flour, salt and chemical thickeners.

So, shoppers, beware of labels: They can be deceptive. And for the die-hard Diet Coke drinkers out there, sorry to be a bearer of bad news. That label on your can of soda might look different, but the consequences could very well end up the same.