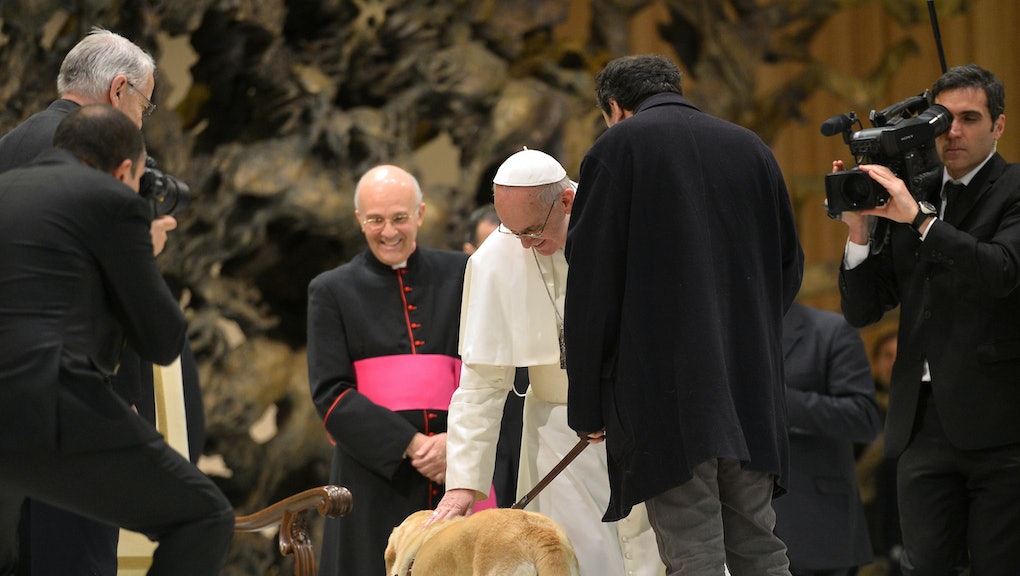 All those years of being man's best friend have paid off for dogs: According to Pope Francis, all dogs are going to Heaven.

The pope made the comment during a recent public appearance in St. Peter's Square when he was consoling a young boy whose dog had just died. The comment doesn't just apply to dogs — the pope's remark opens up the pearly gates to all animals.

"One day, we will see our animals again in the eternity of Christ," Francis said. "Paradise is open to all of God's creatures."

The question of whether it's possible for animals to go to heaven has been one of contention in the Catholic Church for centuries. Some have argued that animals cannot go to heaven because they don't have souls because of the "traditional doctrine that only humans have immortal souls," Psychology Today notes.

Others have argued that animals are just as close to God as man is, a sentiment with which most dog lovers can agree. A 2011 survey found that 81% consider dogs to be family members and equal in status to children.

Pope Francis seems to be taking a stand with this side, but that stance brings up a slew of questions. If dogs can go to Heaven, can they also go to Hell? Moreover, does this privilege of passing through the pearly gates apply to the less intelligent animals? If Pope Francis truly takes this stance, ecclesiastical scholars are bound to investigate these queries.

While the pope may have just made the comment to comfort the boy, it's yet another example of the pope's more liberal takes on matters in the Church — and more family-friendly presentation of existing doctrine. Pope Francis has created a stir amongst the more conservative faction of the Catholic Church for giving "hope to gays, unmarried couples and advocates of the Big Bang theory," the New York Times reports.

But for most, the notion of man's best friend going to heaven is likely more a point of celebration than contention. We love our pets, and the prospect of meeting up with our furry pals in the afterlife sounds pretty darn nice.