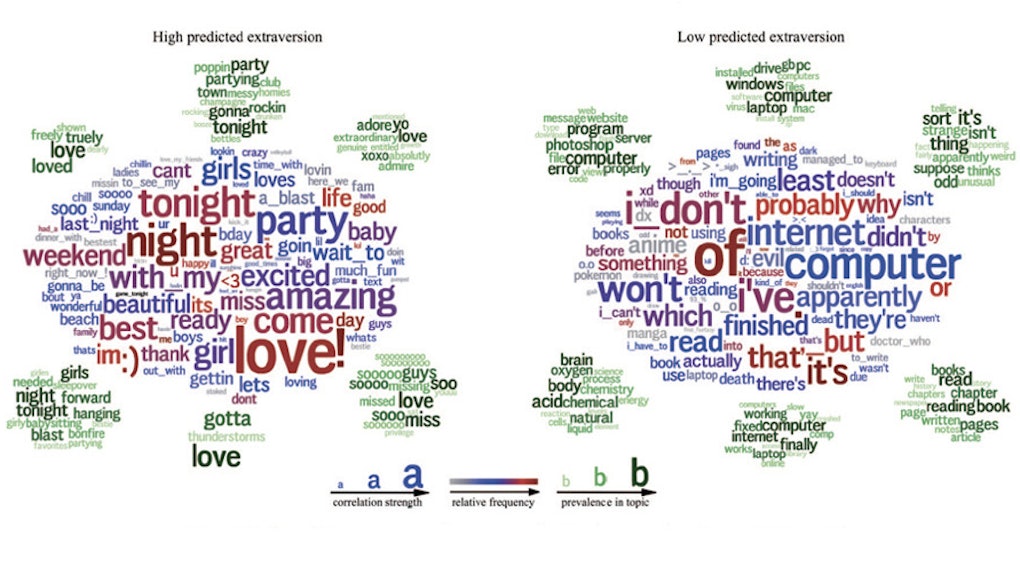 Journal of Personality and Social Psychology

Here's What Your Facebook Status Updates Reveal About Your Personality

"Don't judge a book by its cover," goes the old maxim, a warning not to evaluate people based on their superficial attributes. But according to new research, there's a lot we can learn from those mundane traits — particularly on Facebook.

A study in the Journal of Personality and Social Psychology reveals an association between the words we use in our Facebook posts and our personality traits. The results are fascinating, if unsurprising: Introverted Facebookers tend to use words in status updates generally associated with introverted personality types, like "computer," "Internet" and "read." By contrast, extrovert post more exciting, enthusiastic updates with words focused on their vibrant social lives, like "tonight," "amazing" and "love!"

The results can be seen in the graphic below:

Surrounding the word clouds are green clusters of words most likely to be found together in a single status update. "I particularly love the ones in the bottom right corners for both the introverts and the extroverts, which suggests that a typical extrovert's status might contain these words: soooo, missing, sooo, love," New York magazine's Melissa Dahl writes. "A typical introvert status update, in comparison, is more likely to contain these words: books, read, chapter, reading, book."

The study: Researchers at the University of Pennsylvania's Positive Psychology Center analyzed Facebook status updates from 66,372 users who'd used a third-party personality quiz app, in which users reported their own personality traits in a simple questionnaire. "Personality" in this study refers to the "big five" personality traits — openness, conscientiousness, extroversion, agreeableness and neuroticism — that psychological research are consistent in people regardless of day-to-day changes in mood or context.

After several months, the researchers used their model to predict the personality factors in a separate sample of 4,824 Facebook users. The results, published this week, reveal the words that introverted and extroverted people use the most, based on those five personality traits. As Dahl observes writes: "Disagreeable people tend to use some NSFW language in their Facebook posts."