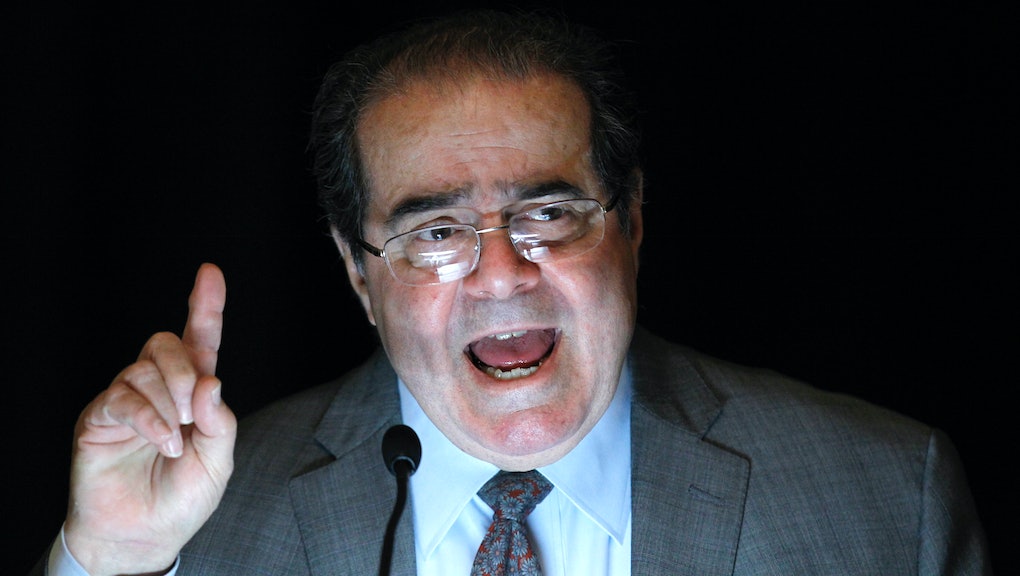 As Americans grapple with a Senate Select Committee on Intelligence report that proves CIA interrogators tortured suspected terrorists and lied about it to Congress, Supreme Court Associate Justice Antonin Scalia has joined the chorus of Americans implicitly defending the use of "rectal hydration" to glean information from suspected terrorists. According to Justice Scalia, "I don't know what article of the Constitution that would contravene [the use of torture]."

In remarks to Swiss broadcast network Radio Television Suisse on Wednesday, Justice Scalia trotted out the familiar "ticking bomb" scenario, wherein information that could stop the imminent detonation of a nuclear weapon in an American city can only be discovered by torturing a suspected terrorist. "You posit the situation where a person that you know for sure knows the location of a nuclear bomb that has been planted in Los Angeles and will kill millions of people. You think it's an easy question? You think it's clear that you cannot use extreme measures to get that information out of that person?"

In the 30-minute interview, the 78-year-old Supreme Court justice also stated that while there are laws against torture in the U.S., he doesn't "think it's so clear at all" that the U.S. Constitution's prohibition on cruel and unusual punishment applies to suspected terrorists.

SCOTUS looks to Jack Bauer: Justice Scalia, described by admirers as a shrewd jurist and something of a Supreme Court cut-up, isn't venturing into unfamiliar territory in defending the use of torture. In 2007, Justice Scalia got in an argument with a Canadian judge about the use of torture as exemplified by fictional CIA superspy Jack Bauer, of 24. "Jack Bauer saved Los Angeles! ... He saved hundreds of thousands of lives!" the Globe and Mail reported at the time. "Are you going to convict Jack Bauer?" the Supreme Court justice continued. "Say that criminal law is against him? 'You have the right to a jury trial?' Is any jury going to convict Jack Bauer? I don't think so."