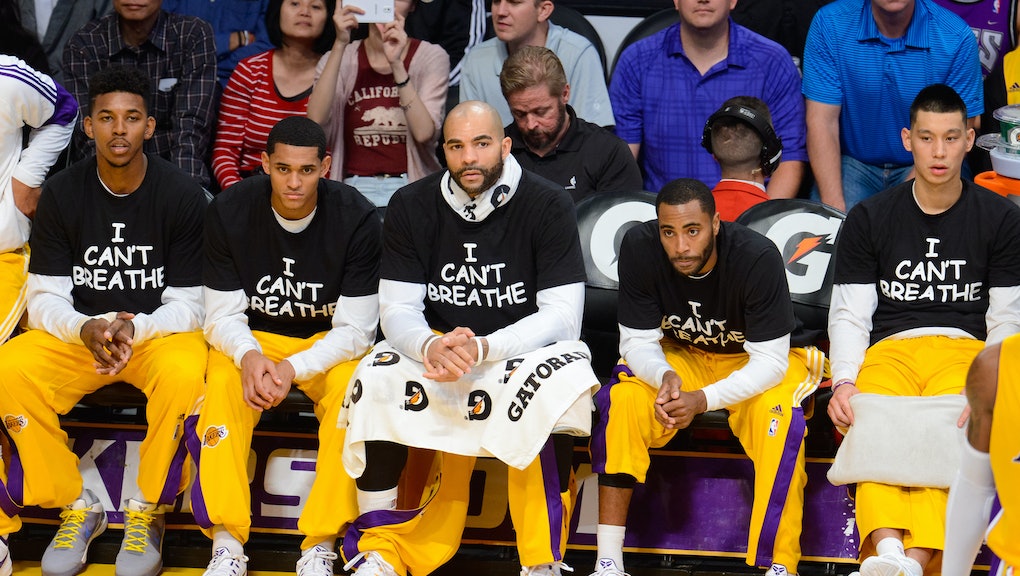 (In case you missed it, athletes are promoting this message to show solidarity with unarmed black men slain by police, specifically Eric Garner.)

Picture this, Geraldo implores: A world where instead of bringing attention to the rampant execution of unarmed citizens, pro athletes used their influence to spread more urgent messages to the black community, like "Be a better father" or "Raise your children."

Watch the clip (from Hannity, via Media Matters) and cringe:

Yes, please Geraldo. Tell us more about the "absent black father," that mythical creature used by racists nationwide to explain every conceivable ill facing black America. Tell us more about why this "problem" merits more focus right now than police killing unarmed people and getting away with it.

No matter that black fathers' involvement in their kids' lives isn't markedly different from anyone else's (unless, of course, they don't live with their kids — in which case they're more likely to be involved, according to the Centers for Disease Control and Prevention). No matter that anti-police sentiment among young black males is likely prompted by racist and violent policing methods, not whether or not dad was around.

Nope. The big issue, according to Geraldo, is black fatherlessness.

This is precisely the level of nuance we've come to expect from the guy who blamed Trayvon Martin's hoodie for his murder at the hands of George Zimmerman in 2012. What's more, the parade of ignorance wouldn't be complete without an allusion to "black-on-black crime" — touted by conservatives as the "real problem" black folks should be discussing instead of police brutality. (Ta-Nehisi Coates clarifies this "phenomenon" quite nicely: "Yes," he writes. "It's almost as if killers tend to murder people who live near them.")

Meanwhile, people around the world continue demonstrating en masse against American police violence against black people. Perhaps Geraldo should join them; if he's really worried about black fathers, like Eric Garner, he should probably have a stake in ensuring the police stop killing them.