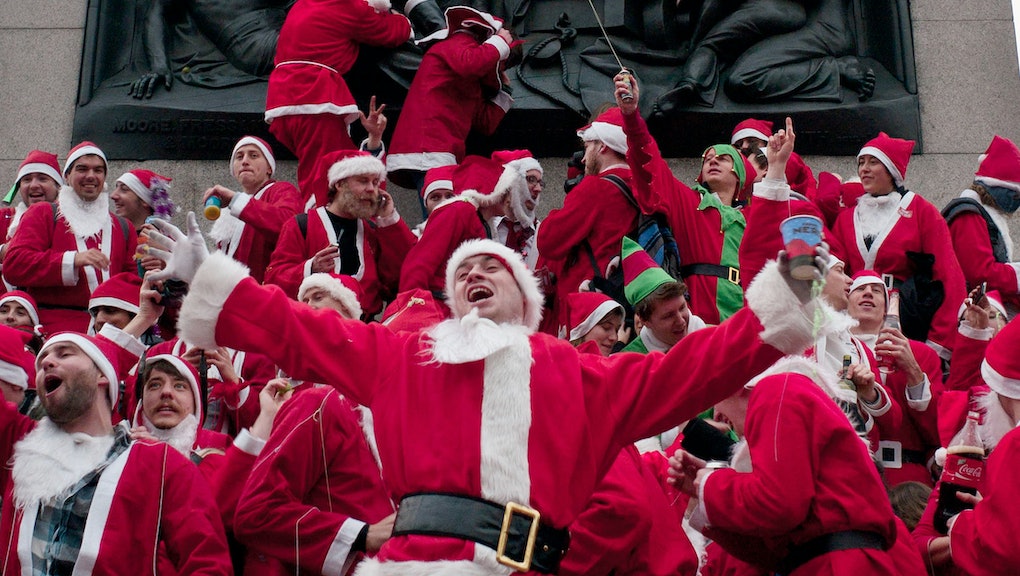 This Year's Santacon Promises Not to Be a Drunken Bro-Fest

Santacon is taking steps this year to keep its participants off the Naughty List.

The annual New York City gathering of holiday costumed drinkers has been a source of ire for many business owners and neighbors, especially as the event has grown to tens of thousands of participants. If you've ever hung out at a bar that suddenly filled wall to wall with drunken Santas, you probably understand the frustration.

The solution: Santacon is scaling things back, asking participants to only go to the locations on its official list and avoid loitering in the streets, among other disruptive activities. "It's more important this year than ever to pace yourself, watch out for your elves, and stay safe," the official website tells participants. "Fighting, public urination and vandalism are unacceptable and a great way to ensure that there will be no Santacon in 2015. "

To that end, organizers have hired famous civil rights lawyer Norman Siegel to oversee the proceedings. He'll be around to make sure that law-abiding Santas are respected and to document anything that might require legal action, according to NBC 4.

Sticking to the list of approved bars is more important than ever — mostly because some establishments have decreed that they won't let in any Santas. "If a venue isn't on this list it's because they don't want you there," the event website says. "Please move around throughout the day from venue to venue but spend most of your time inside, not on the streets."

A larger gathering: Displeased bars and neighborhood pressure aren't the only things forcing Santacon to scale back. Saturday is marked as a national day of protest against police brutality over the deaths of Eric Garner, Michael Brown and many others at the hands of law enforcement.

With New York City potentially playing home to the country's largest protest, Santacon's spirit of drunken cheer can make for some dissonance. "Santacon has respect and compassion for the hard-working municipal organizations of NYC, as well as for the important civil rights demonstrations currently shaping our city's future," the organizers wrote on the event site.

As of Saturday morning there were 14,000 planned attendees on the Santacon Facebok event page. Time will tell if they manage to keep it under control.