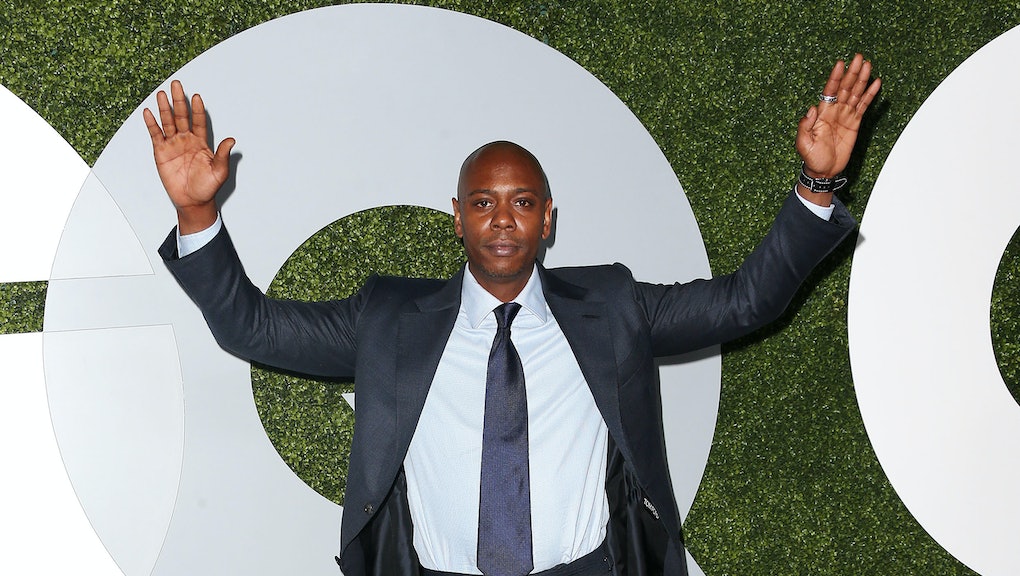 Even Dave Chappelle Isn't Safe From Being Choked by Police

Watching Dave Chappelle perform stand-up is always a hilariously uncomfortable experience — just ask Eddie Murphy — but at a performance in New Orleans on Thursday, the comedian's abrasive humor took a personal turn when he spoke out about getting choked by a New Orleans police officer while filming a movie when he was a teenager.

While riffing on police brutality in relation to the chokehold death of Eric Garner, Chappelle revealed that he, too, had been the victim of police brutality. According to the New Orleans Times-Picayune's Jarvis DeBerry, Chappelle said that he was working on his first movie, Undercover Blues, in 1992 when the incident occurred in full view of the cast and crew.

In the film, 18-year-old Chappelle plays a mugger who attempts to assault Dennis Quaid, and arrived for filming dressed for the part. After ducking under police tape, which surrounded the set, a police officer guarding the set immediately seized Chappelle and started choking him.

The weirdest thing about being a black man being choked by the police, Chappelle said, is that you don't even wonder why it's happening. You just think, he said, "OK, here we go."

A woman onset saw what was happening and shouted to the officer that Chappelle was involved in the shoot. After releasing him, the police officer said, according to Chappelle, "Well, why didn't he say something?"

Chappelle, who raised eyebrows at GQ's "Men of the Year" party by raising his arms in the "hands up, don't shoot" pose that's become a symbol of defiance against police brutality, isn't the first black celebrity to speak out following the failure of multiple grand juries across the country to indict police officers involved in the high-profile slayings of black men.

Chris Rock's brilliant explanation of the state of race relations in the U.S. received nationwide acclaim after he told New York's Frank Rich that "when we talk about race relations in America or racial progress, it's all nonsense. There are no race relations. White people were crazy. Now they're not as crazy. To say that black people have made progress would be to say they deserve what happened to them before."