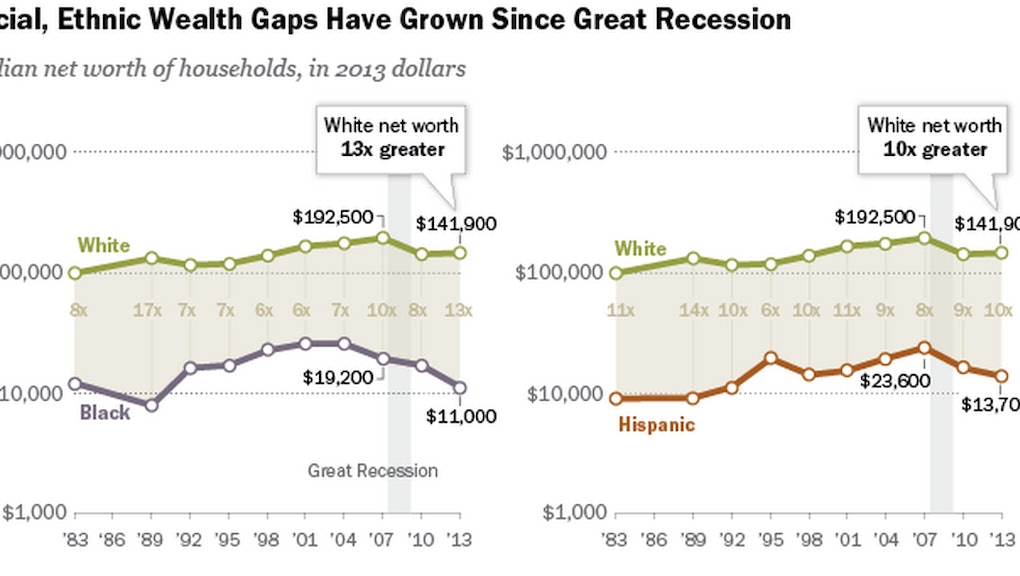 One Chart Shows How the Recession is Still Hurting Poor, Young and Minority Americans

The recession may be over, but many Americans are still feeling its effects — and despite the recovery, the circumstances of America's most disadvantaged citizens are getting even worse.

The wealth gap between white Americans and black and Hispanic Americans has widened in the years since the recession, according to a new Pew Research Center study. It's another sign that coasting to recovery isn't going to be enough for many of the country's most vulnerable people.

The numbers: While the median net worth of white households dropped steeply from a high of $192,500 before the recession, that figure has climbed up to $141,900 since 2010.

The same can't be said for the median net worth of black households, which actually started dropping in the early 2000s and never came back up following the recession. The most recent figure sits at $11,000, 13 times less than white net worth.

Similarly, Hispanic household median net worth never went back up after the recession ended. At $13,700, it's 10 times less than same the figure for white households.

A recovering economy doesn't mean things are getting better for everyone. There are lots of intertwined reasons for the widening gap, including structural racism, difference in assets and a need for lawmakers to focus on the "middle class."

For instance, as the Pew report explains, white households are much more likely to own stocks, while black and Hispanic households tend to count homes as a more important asset. While the stock market rebounded relatively quickly, the housing market experienced a much bigger downturn.

Despite these stark differences, racial and ethnic economic inequality in the recovery has not really been seriously addressed in Washington. Keep these figures in mind the next time you're reading about increased income and employment since the recession. Whose jobs are they, and whose money?