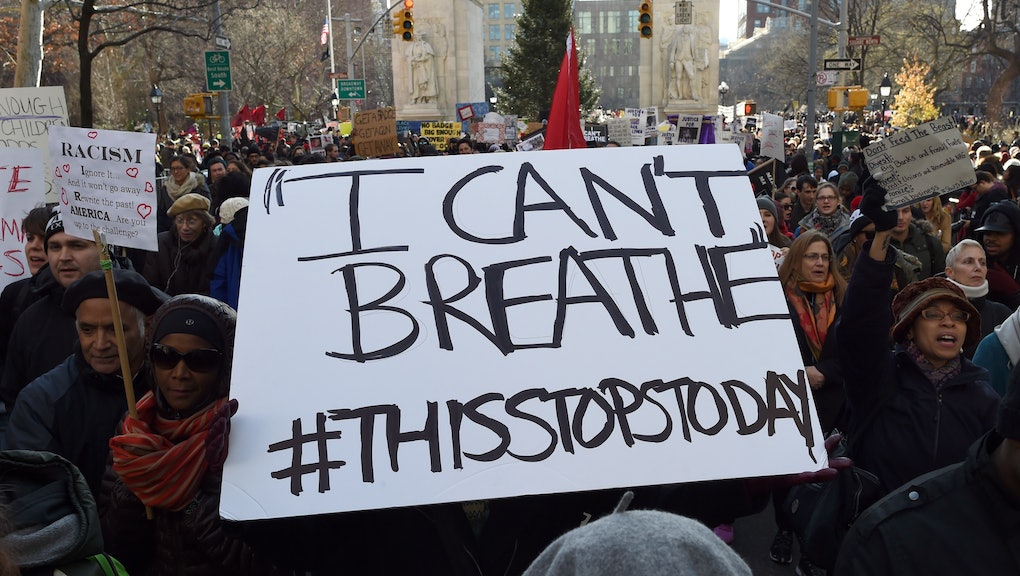 Why SantaCon is No Match for #MillionsMarchNYC, in One Tweet

#BlackLivesMatter more than drunk idiots. That's the lesson to be drawn from two movements dueling for attention in New York City on Saturday, as the annual drunk reveling of SantaCon is drowned out by the chants of #MillionsMarchNYC.

When the organizers of #MillionsMarchNYC, a protest in New York City that hopes to mourn and advocate for "all those innocent people of color killed by the misuse of police force," announced the date of the protest, they didn't realize that it fell on the same Saturday as SantaCon, a 15-year-old bar crawl featuring tens of thousands of Santas getting progressively more drunk with each stop. That hasn't dissuaded thousands of protesters from joining in a "Day of Anger" to demand justice for Michael Brown, Eric Garner, Akai Gurley and other victims of police violence.

Although SantaCon organizers pledged — through their lawyer — respect and compassion for "the important civil rights demonstrations currently shaping our city's future," many #MillionsMarchNYC participants worried that their important message would be drowned out by bridge-and-tunnel revelers:

Others were dispirited by real-world evidence of #CrimingWhileWhite in action:

When #MillionsMarchNYC participant Arun Gupta engaged with one of the SantaCon celebrants, however, any concern that the "message" of public intoxication would overshadow the march vanished:

This says everything. Encapsulating both the true nature of SantaCon and the implicit privilege of the ability to flout public drinking laws without fear of a disproportionately violent response by law enforcement, this conversation shows what SantaCon is really about — and what #MillionsMarchNYC hopes to defeat. SantaCon may claim origins in subversive anti-commercial street theater, but real subversion is marching against police violence that disproportionately victimizes poor and minority Americans.

In the words of the ten-thousand-strong protesters upon meeting with SantaCon-ers in Herald Square: "Fuck you, SantaCon — a revolution's goin' on."