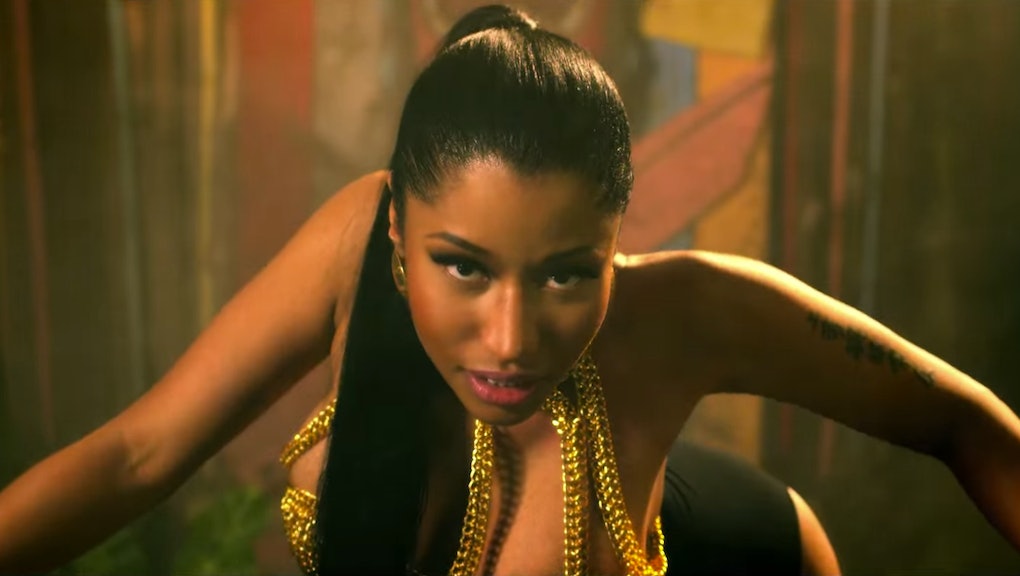 Nicki Minaj's Latest Album Is Just What Hip-Hop's Been Missing

It has been more than 30 long months since Nicki Minaj released her last record, Pink Friday: Roman Reloaded. That was the album that took Nicki Minaj, one of the best emcees in the game, and fully turned her into a full-fledged pop star. But now, after more than a year of T-Swiftian levels of press speculation, Minaj has finally released her new record, The Pinkprint. The album isn't just a return to hip-hop form for Minaj — it's a harbinger of the better year to come for music in 2015.

The rapper first hinted at a return to her hip-hop roots in 2013; since then, critics and bloggers have been in furious anticipation of the hardcore hip-hop album Minaj never truly released — one like the zippy, acid-tongued mixtapes that first caught Lil Wayne's attention and launched her career circa 2009.

But it turns out the pop vs. hip-hop debate isn't what matters here. What's different about The Pinkprint is that, for the first time, Nicki Minaj sounds like herself. And that kind of authenticity is something that popular rap has been sorely missing for awhile now.

Minaj did little to combat the hubbub about her revamped sound as it built. Through the first half of 2014, she hell-no'd questions about whether Pinkprint would have anything like "Super Bass," let alone anything like the Bud Light-endorsed "Starhips." She even released a string of tough-as-nails singles on SoundCloud, including an emotionally bottomless cut with Chicago rapper Lil Herb and "Lookin Ass," whose video features Minaj literally gunning down the male gaze. For all intents and purposes, the bubblegum-toned (and bubblegum-wigged) Nicki Minaj seemed dead and buried, and people were pumped.

That wasn't entirely true though. The Pinkprint is way harder than anything Minaj has officially released thus far, even though it isn't as gritty as some of her singles suggested. It isn't hard because it's aggressive rap, though; it's hard because it's brutally honest.

The Pinkprint itself is marked by its combination of sweet piano hooks and cutting verses. For every line about Minaj's own flow, there's one about an estranged family member, a murdered cousin, an abortion and (maybe one too many) about a breakup. The music changes as needed, from DeLonge-tinged guitar ("The Crying Game") to soaring keyboards ("The Night Is Still Young")  and even, when the lyrics call for it, something hard-edged ("Feeling Myself"). It's a solemn album, one that sounds older and more sober. It sounds like Barbie/Roman waking up after a five-year Top 40 binge and meeting Nicki Minaj once again.

Ironically, though, this album may perform better than anyone expected — and that's a good thing for music lovers everywhere. We need her to chart now more than ever, too, after the horrible year mainstream black musicians — especially rappers — had in 2014. Iggy Azalea earwormed her way to Song of the Summer. Nine of Spotify's Top 10 artists were white and the only rapper on the list was the lately awful Eminem. Not a single artist of color received a Grammy nomination for Record, Song or Best New Artist of the Year. Compound 2014 with 2013, when Macklemore trumped Kanye, Drake and Kendrick for Best Rap Album by rapsplaining his cool-bro-ness to America, and it's clear that a full-force Minaj is the rapper hip-hop needs right now.

Thankfully, The Pinkprint's four singles have caught on. "Anaconda," "Pills N Potions," "Bed of Lies" and "Only" have spent 18, 18, three and six weeks on the Hot 100, respectively. What's more, they pale compared to to The Pinkprint's other 12 tracks (13 including iTunes-only single "Truffle Butter"). The "Anaconda" video may have rounded out the Summer of Ass, but the album's strongest tracks are simpler, tougher and on deck for single releases throughout 2015. Perhaps the strongest is "Feeling Myself" — a collaboration with Beyoncé that leaked last week and gave the Internet a collective aneurism — which at its weakest reminds us what a real hip-hop track sounds like and at its strongest renders Iggy Azalea totally irrelevant. The message is pretty simple: "This is how grown women do hip-hop."

In every way, The Pinkprint will help bring on a brighter year for pop-hop in 2015. In some ways, 2014 barely happened to pop music. Seven of Spotify's Top 10 streamed tracks in 2014 were actually released in 2013 ("Happy,"  "Dark Horse," "All of Me," "Timber," "Rude," "Waves" and "Counting Stars," with Ariana Grande's "Problem," Calvin Harris' "Summer" and Clean Bandit's "Rather Be" as exceptions). But the 2015 class, led by Nicki Minaj, is sure to bring real and current hip-hop back to pop. There are new records due from Kanye West, Drake, Kendrick Lamar and Lupe Fiasco. On the alternative front, there's a Joey Bada$$ album in the works. D'Angelo just up and dropped his first album in 14 years last night. Where 2014 never really got going, 2015 is bursting out of the gate with Nicki Minaj is leading the charge.

And she's inaugurating the year in the best way we could ask: She's reminding everyone what songs birthed by human beings rather than genres sound like. She's reminding the world of what Nicki Minaj at her best sounds like.