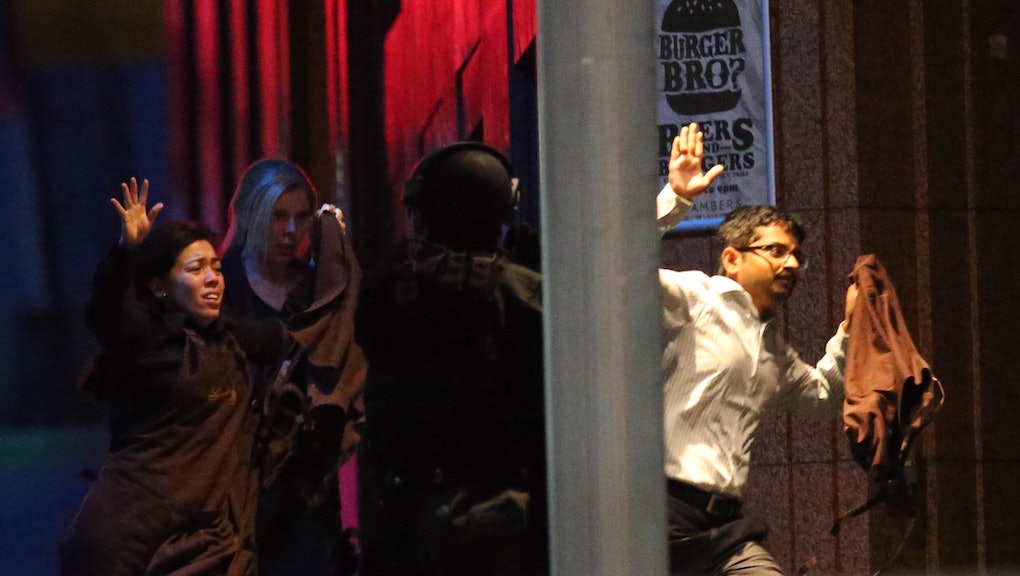 Sydney's Hostage Crisis Is Over

Update 2:25 PM ET: Local police confirmed Monday afternoon that the gunman as well as a 34-year-old man and a 38-year-old woman died in the hostage crisis. No explosive devices were found at the scene. 17 hostages total have been accounted for.

Update 10:41 AM ET: Police have confirmed that after 16 hours Sydney's hostage crisis is over. The condition of the gunman is unknown at this time.

Update 10:20 AM ET: As the situation unfolds in Sydney, several more hostages were seen emerging from the cafe, followed by police moving in and heavy gunfire.

Original story: Australian police locked down the center of Sydney on Monday after an armed man took hostages in a downtown cafe. Reuters reports that the hostage-taker has forced trapped customers to display an Islamic flag, "igniting fears of a jihadist attack."

Heavily-armed officers and paramilitary police (the Australian equivalent of American SWAT unites) have cordoned off several blocks around the Lindt Chocolat Cafe in Martin Place, a popular downtown lunch spot, as negotiators tried to defuse what's being called "one of the biggest security scares in Australia for decades."

Australian authorities have refused to say what they believe the gunman's motives might be. It's unclear whether the gunman has made any demands at this time.

"I would like to give you as much as I can but right now that is as much as I can," New South Wales state police Commissioner Andrew Scipione told a news conference on Monday. "First and foremost, we have to make sure we do nothing that could in any way jeopardize those still in the building."

Deputy Commissioner Catherine Burn said the police "do not have any information that suggests that anybody is harmed at this stage," according to the Sydney Morning Herald, adding that "police negotiators have had contact and will continue to have contact."

Australians have been on high alert in recent months. "Australia, a staunch ally of the United States and its escalating action against Islamic State in Syria and Iraq, has been on high alert for attacks by home-grown militants returning from fighting in the Middle East," Reuters reports.

"This is a very disturbing incident. I can understand the concerns and anxieties of the Australian people," Prime Minister Tony Abbott, who had warned of militant plans to target Australians, told reporters in Canberra. "Australia is a peaceful, open and generous society — nothing should ever change that and that's why I would urge all Australians today to go about their business as usual."

An earlier version of this article failed to cite a passages from Reuters in accordance with Mic editorial standards. The article has been updated to properly attribute the language to Reuters.