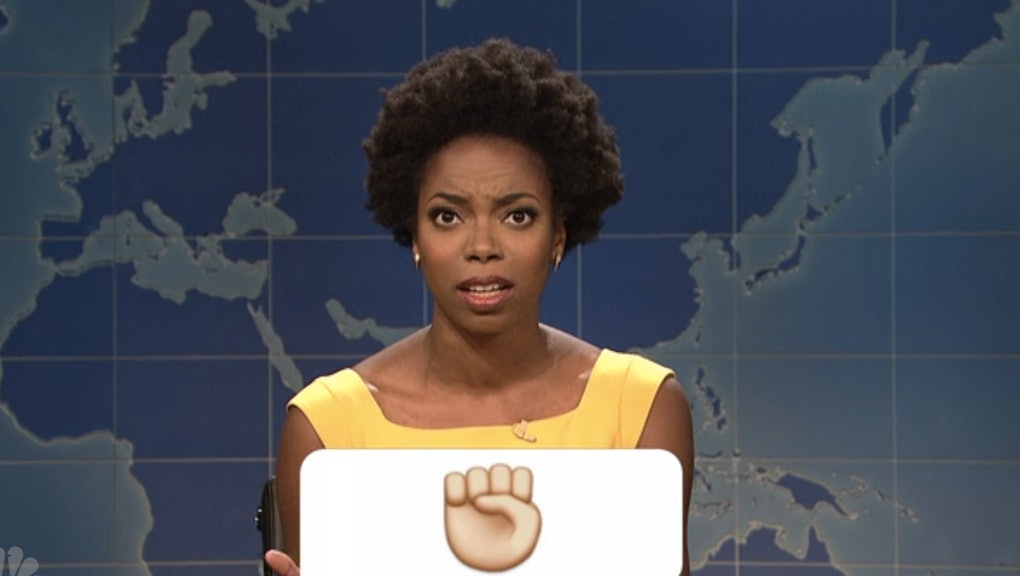 "Even the black power fist is white!"

With reference to one emoji, the white fist, this weekend, Saturday Night Live's Sasheer Zamata beautifully summed up the diversity problem pervasive through the tech industry during the show's "Weekend Update" sketch. From the emojis on our phones to the appalling racial and ethnic diversity figures of tech titans like Google, Facebook and Apple, this is an issue that is hard to avoid.

Using the emoji to draw her comparison to tech's larger diversity problem, Zamata notes that not one of the 800-plus emojis is a black person. "Unicode, the company that creates emojis, thought that instead of one black person we needed two different kinds of dragons, nine different cat faces, three generations of a white family. And all the hands are white, too."

While Zamata can deliver a joke, she hits the truth on tech: As the Associated Press reported just last week, the industry's employment diversity figures are evidence alone: "Only 2% of the U.S. workers at Google and Facebook are black, and the number of Hispanics is below 5% at both companies. Cutting across the U.S. in all industries, 12% of the workforce is black and 14% is Hispanic. Meanwhile, less than one-third of the worldwide workforce at most major technology companies, including Google, Apple and Facebook, are comprised of women."

This isn't to say that the problem has gone completely unnoticed. Google's Made With Code initiative is designed to attract women to the industry, as are enterprises like Black Girls Code and the Latino Startup Alliance. At least one company has even created its own set of black emoticons.

But these efforts, as admirable as they are, can't promise definitive outcomes. So the current diversity problem in the tech world remains unsolved.

Until a solution is found, Zamata and other voices for tech equality will continue to speak up. Now we just need more people to listen.