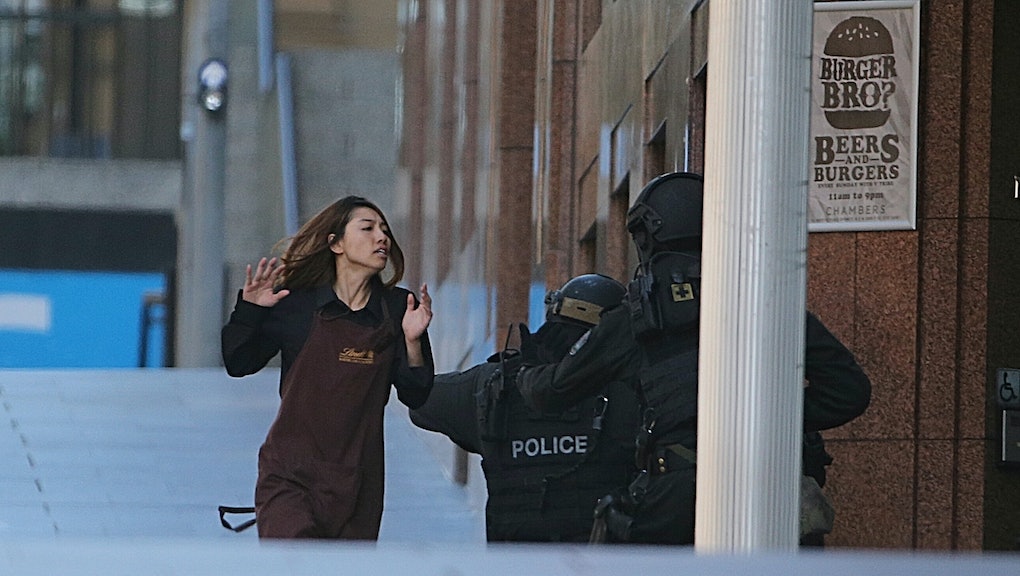 In the wake of Sydney's hostage crisis, one Australian newspaper seems to have ignored all the rules for responsible reporting.

Despite pleas for conscientious news coverage from both the Australian police and the Australian Muslim community, the Daily Telegraph released a "special" edition focusing on the Martin Place siege, where an armed man held a number of people hostage inside a Sydney cafe.

This cover goes wrong in so many ways.

"IS takes 13 hostages in city cafe siege": For one, it's still unclear whether the Islamic State is responsible for the attack. The gunman, Man Haron Monis, has been identified as an Iranian refugee who received political asylum in 1996, the BBC reported.

According to the New York Times, "police would not confirm whether a terrorist group or individual with links to terrorism was behind the siege," and IS itself hasn't claimed responsibility — yet the Daily Telegraph reported the connection before any details emerged.

Second, the exact number of hostages inside was still unclear. The Sydney Morning Herald counted 15, but also noted that the number was still "undisclosed." Other reports said the gunman was holding anywhere from 13 to 50 people inside the cafe. Regardless of the actual number, no one knew for sure, and to report that it was definitely 13 is irresponsible at best.

Showing that image is wrong: The hostages were being held against their will, and putting a clear photo of their faces on the cover is in bad taste. The Daily Telegraph isn't the only outlet to have done so — the New York Times used the same photo on its front page — but it's still a questionable decision. Blurring the faces would have been more appropriate.

Using "death cult" is inflammatory: When incidents like this occur, no news outlet should concern itself with drumming up fear for the sake of selling newspapers. There are a thousand things wrong with this phrasing: Who exactly is this "death cult"? If none of the hostages had been confirmed to have been killed at press time, why was the word "death" used? Is it actually a cult?

Judging by the Daily Telegraph's Facebook page, many readers in Australia had similar concerns:

There's a right way and a wrong way to cover events like this. In Canada, for example, television network CBC demonstrated the right way to cover a shooting. The station remained calm and level-headed, and sidestepped any opportunity for handwringing or panic. As Mic noted at the time, "[CBC anchor Peter Mansbridge] engendered the trust of his audience rather than beat them over the head with drama."

However, there are other examples of news outlets careening wildly off the road during a crisis. In the wake of the 2013 Boston Marathon bombing, the New York Post ran a cover with a photo of two "suspects" and the headline "Bag Men: Feds seek these two pictured at Boston Marathon."

As it turned out, the two men pictured had absolutely nothing to do with the bombing, and later sued the paper for defamation.

In the end, it's important to be cautious. No one would argue that covering a tragedy is simple. It requires good judgement, experience and an ironclad news sense, none of which are easy to come by.

But the Daily Telegraph has clearly shown in this case that they couldn't be bothered to do the work of responsible reporting — and that's bad news for everyone involved.