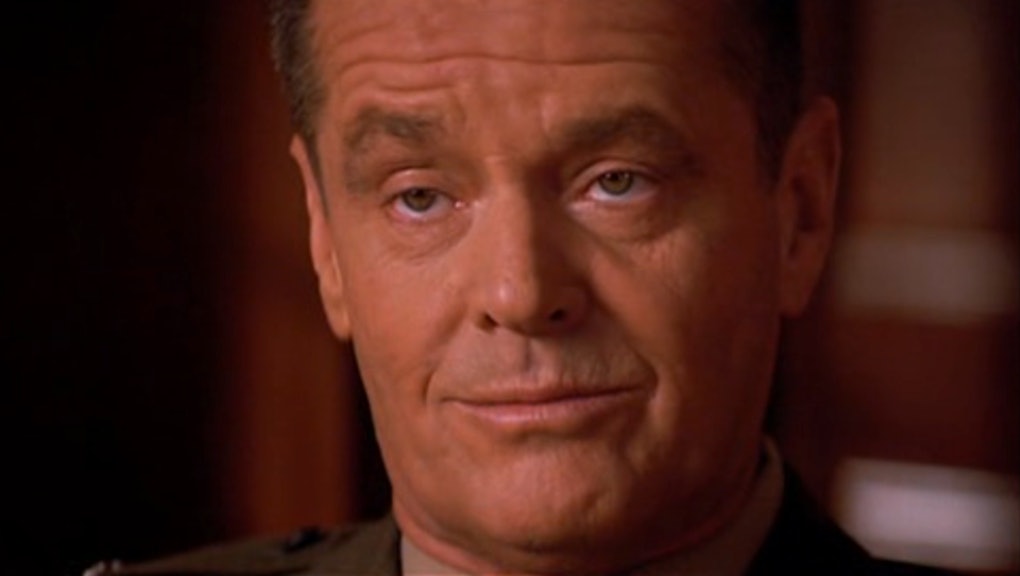 The New York police department has been under national scrutiny for months following the choking death of Eric Garner on Staten Island in July. After a grand jury declined to indict officer Daniel Pantaleo for using an unauthorized chokehold on Garner, the NYPD announced that New York's Finest were dedicated to "rebuilding public trust."

For context: The image in the tweet, sent Monday afternoon, is a transcript of Nicholson's famous monologue from A Few Good Men (and if you haven't seen it, that's a crime against decency). The quote is Nicholson's  Col. Nathan R. Jessup, standing trial for ordering the brutal killing of another solider. Jessup justifies a secret "Code Red" order to attack an American Marine on the grounds that, as Slate's Ben Mathis-Lilley eloquently puts it, "'grotesque' men and unsavory violence are necessary to protect the border between civilization and chaos."

"Son, we live in a world that has walls, and those walls have to be guarded by men with guns. Who's gonna do it? You? You, Lt. Weinburg? I have a greater responsibility than you could possibly fathom. You weep for Santiago, and you curse the Marines. You have that luxury. You have the luxury of not knowing what I know. That Santiago's death, while tragic, probably saved lives. And my existence, while grotesque and incomprehensible to you, saves lives. You don't want the truth because deep down in places you don't talk about at parties, you want me on that wall, you need me on that wall. We use words like honor, code, loyalty. We use these words as the backbone of a life spent defending something. You use them as a punchline. I have neither the time nor the inclination to explain myself to a man who rises and sleeps under the blanket of the very freedom that I provide, and then questions the manner in which I provide it. I would rather you just said thank you, and went on your way, Otherwise, I suggest you pick up a weapon, and stand a post. Either way, I don't give a damn what you think you are entitled to."

Wow, wrong: Given the heightened level of mistrust directed toward law enforcement agencies across the country and anxiety over police brutality against unarmed civilians, choosing a quote of Jessup angrily arguing that he, a uniformed servant of the people, is justified working above and beyond the law because his existence, "while grotesque and incomprehensible to you, saves lives," is the absolute wrong choice for a police department allegedly attempting to "rebuild trust" with civilians. How NYPD commanding officer Edward Winski, who allegedly posted and then deleted this tweet, thought this was a good idea for Motivational Monday is beyond comprehension.