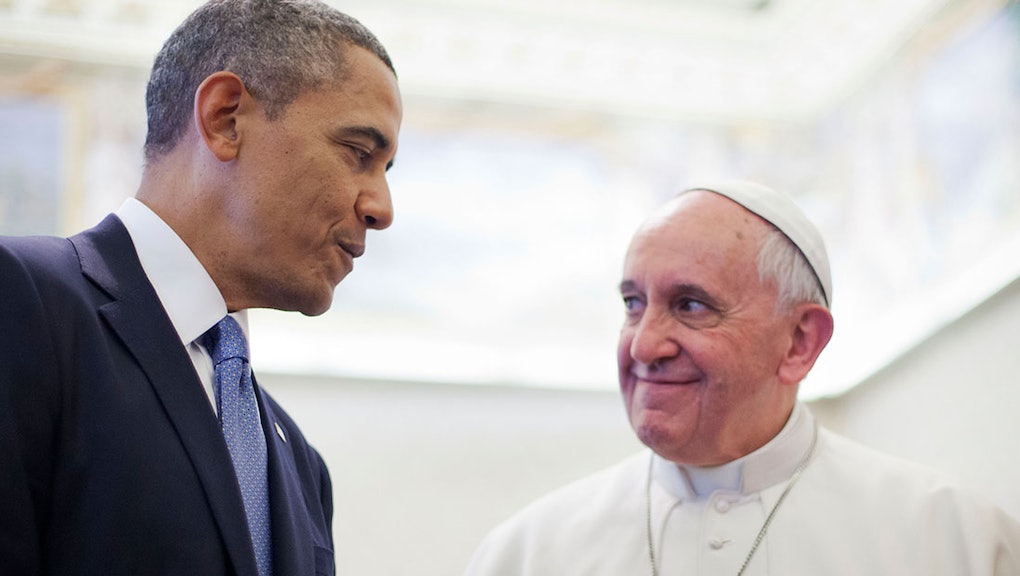 The news: While the slow death of the Guantanamo Bay prison facility might be reason to believe President Obama is procrastinating on his promise to shutter it once and for all, the Associated Press reports that the head of the Catholic Church hasn't had quite the same bad memory.

On Monday, Pope Francis has again requested that President Obama close the infamous military prison, where detainees in the war on terror have suffered through everything from "inhuman treatment" to hunger strikes.

Those "current inmates" include 148 detainees still kept at the prison facility, though that's down from its maximum population of about 700 during the Iraq War.

The background: President Obama has weighed options to close the facility and reaffirmed his commitment to following through on its promise to shut it down in October. But as Obama's presidency enters its sixth year, Gitmo remains open for business despite a little over half of its inmate population having been cleared for release.

The push to close the detention center has escalated following the declassification of part of a CIA report acknowledging that detainees in its custody were tortured. CNN reports that Vietnam veteran and actual torture survivor Sen. John McCain is apparently ready to work with the president to release or transfer the remaining inmates, but warns that any such plan will have to overcome GOP opposition in Congress to any changes.

Earlier this year, Pope Francis avoided mentioning the U.S. by name while condemning the practice of extraordinary renditions, in which suspected militant ringleaders and other high-profile targets in the war on terror were commonly abducted and transferred to CIA custody.

Some of these inmates were later tortured or subject to "enhanced interrogation" techniques by the CIA or allied governments known to torture prisoners. The pope referred to these renditions as "hidden death sentences" and a "hidden, illegal punishment," asking governments to respect the dignity of all inmates.

The takeaway: While opposition to the brutal practices at Gitmo should essentially be the moral baseline of any person concerned with human rights, the pontiff's explicit request that the Obama administration follow through on its promise to close the prison is yet another reminder that we're all still waiting for the final chapter in this sorry phase of American history.