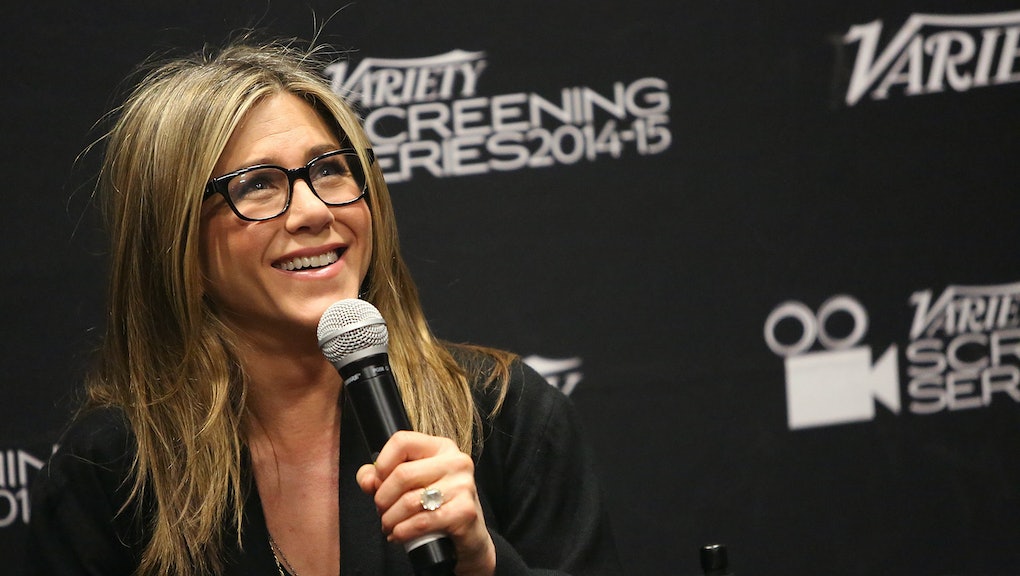 Jennifer Aniston is showing us what it really means to be pro-choice.

Aniston addresses the pressures of motherhood placed on her — and on all women — with Allure magazine and shuts the whole thing down:

"I don't like [the pressure] that people put on me, on women —that you've failed yourself as a female because you haven't procreated. I don't think it's fair. You may not have a child come out of your vagina, but that doesn't mean you aren't mothering— dogs, friends, friends' children."

Motherhood does not make a woman. This is an important point that Aniston and Gloria Steinem have discussed before. Women are complete people unto themselves and do not need children to complete their personhood or to establish their identity — even if conservative sentiment around reproductive justice seems to value a fetus over a woman. Women's value is not tied to motherhood. Period.

This is actually a feminist statement: Aniston's comments champion one of the two tenets of feminism: a woman's control over her own body. Aniston is deciding for herself whether she wants to become a mother. She is also publicly questioning the definition of what "mother" means — people can act motherly, as caretakers, to other people, human or not.

The complaints Aniston faces, that she is "so career-driven" and focused on herself and that she doesn't "want to be a mother and how selfish that is," are the same ones directed at women who buck the heteronormative narrative of getting married and having babies. But ultimately, we cannot love someone else if we do not love ourselves first.

Aniston is doing it right. She is being responsible and taking care of her own life and making her own happiness, which right now means a happy life without children. She is "having it all" and is a "grown woman."

And she can do whatever she wants.