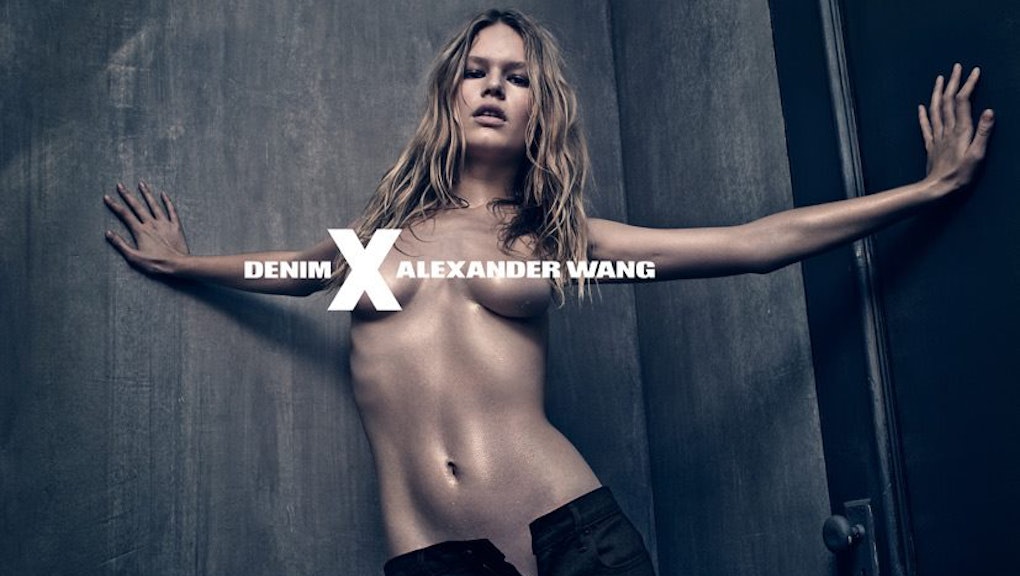 Fashion's Biggest Problem Has Nothing to Do With the Clothing

And this year, you probably won't get much sexier than model Anna Ewers in Alexander Wang's new ad campaign. The Spring 2015 ads are ostensibly for jeans, but Wang chose to pose his model wearing nothing but pants around her ankles and a vague look of carnal satisfaction on her face. "Once you see it, you can't stop thinking about it," Wang explained to Women's Wear Daily. "I wanted an image that would provoke."

But it seems that Wang miscalculated. Despite their demand for reaction, the images were received with a collective shrug. Media outlets commented that the ads were "incredibly NSFW," "steamy" and "sexy," then returned to their regular programming. Jezebel summed it up thusly: "Alexander Wang's New Denim Ads Are Like 'SEX!!!' in a Super Boring Way."

It appears that what's supposed to be provocative isn't actually provoking us anymore. Fashion, you have no more excuses left: It's time to stop gratuitously sexualizing the female body.

We've reached peak model nudity. It's no surprise that after being been bombarded by ultra-sexual imagery for so long, from billboards and commercials to magazine covers, these bodies arguably no longer register as remarkable.

Contemporary fashion advertising has long been about shock factor: Take the 2004 Gucci ad that featured model Carmen Cass with a "G" shaved into her pubic hair. Or Tom Ford's men's cologne ad that displayed a bottle strategically wedged into a woman's greased-up crotch.

Mass-market brands like American Apparel and Abercrombie & Fitch are also notorious for belaboring consumers with sex, sex and more sex; the latter ran a spread in its quarterly titled "Group Sex" featuring wet college-aged models wearing nothing at all. Diesel dropped the charade in 2010 and ran a campaign called, simply, "Sex Sells," a valiant attempt at self-awareness.

Fashion brands may argue for nudity as an expression of the brand's aesthetic or as a simple appreciation for the beauty of the female form, as the famed and widely praised Pirelli Calendar does.

But when it comes to advertisements, we know better. "Provocative" images are sexualized images, tapping into society's fixation on the naked female body via the all-important male gaze. It's the same fixation that drives paparazzi to dive for shots of celebrities' nether regions (Britney! Paris! The noughties!) as they exit cars, and what had people clicking on photos from the infamous nude photo hack of celebrities like Kate Upton and Jennifer Lawrence.

The difference is that naked celebrity selfies are thrillingly taboo; but sanctioned nudity in fashion magazines doesn't seem to hold the same titillating appeal. Even readers realize, and reject, the images' contrived "shock value."

We're not buying it. Sexy female bodies don't shock, but do they still sell? The question was taken up in 2006, when professors Robyn Goodman, Jon Morris and John Sutherland of the University of Florida collected photos from Vogue, Cosmopolitan and Allure and gauged women's emotional responses to each. The results? The sexier a photo was, the less appealing it was to the college-aged women who were surveyed. They preferred more wholesome, everyday women over the sex kitten aesthetic.

So why do brands keep insisting on sexy ladies? In the study, Goodman noted who's often behind the ads. "If you look at most of the Fortune 500 [advertising] companies, who are they run by? Men," she said. "I think advertisers would say if you show a woman a sexy picture, many of [the women] will want to emulate it," added Morris. "But I think this research shows that's not true."

In fact, ads that expose and sexualize the female body can be detrimental to women's self-perception and confidence. A study published in Journal of Marketing Communications found that thin models fitting society's idealized beauty standard prompted negative responses by female consumers. On the other hand, aerie's no-airbrush ads that swapped ultra-skinny, ultra-sexy models for more "regular-looking" ones were a runaway success with shoppers.

It's time for less sexualizing, more clothing. It's about time fashion ads reflect their empowered consumers. This year more than ever, young women are turning their attention to gender inequality, thanks in no small part to millennial titans like Beyoncé, Taylor Swift and Emma Watson. 2014 has been the year of combatting the male gaze with efforts like the viral "catcalling" video and Tumblrs documenting women's experiences with street harassment.

It's about time, then, we take a look at advertising that endorses that gaze. Branded naked bodies have lost their luster, no matter how much oil you slather on a model's derriere to make it shine. That means fashion brands have no more excuses. In 2015, let's aim for more blouses and fewer naked bodies. Instead of selling the female body, let's just try selling clothes.