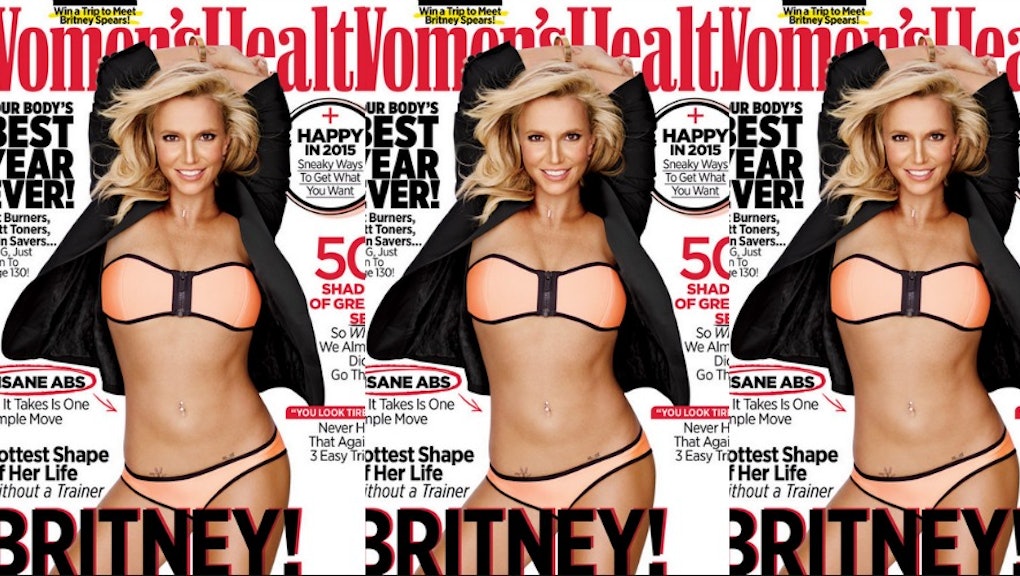 Why must Britney Spears always be stronger, and hotter, than yesterday?

That seems to be the message, at least, of the new Women's Health cover story featuring America's ultimate pop star. But while the story's headline declares that Britney is "Stronger Than Yesterday (Or Ever!)" on the cover, Spears looks less like her old self and more like a somewhat recognizable doppelganger.

The wizardry behind the cover is hard to know. It could be overzealous airbrushing, or simply tricks with lighting or expert makeup. (Mic has reached out to the magazine for comment.) What is clear is that the Women's Health cover photo doesn't reflect what the 33-year-old icon actually looks like in real life.

Not surprisingly, the backlash to the cover has already begun. But amid what is sure to be yet another round of Spears-bashing, it might be worth taking a step back to think about what all the mockery is actually about: a refusal to let a woman — especially a famous woman — look her age.

As a society, we're pathologically uncomfortable with aging women, especially in Hollywood and media. As Vulture noted last year, "Male movie stars are allowed to age into their 40s, 50s and even 60s while the ages of their female love interests remain firmly on one side of the big 4-0." (How often does 53-year-old George Clooney star alongside a 53-year-old love interest?)

When it comes to media, the occasional praise we throw Helen Mirren's way is far outweighed by the stories headlined "15 Celebs Who Are Aging Badly" and "14 Celebs Who Haven't Aged Well." Even the positive headlines underscore our obsession with maintaining youthful beauty; when we praise women for "aging gracefully," we're really praising their ability to stay as attractive possible while resisting age, rather than, you know, actually changing.

The problem for Britney Spears is that she has changed. Sixteen years, not to mention a rigorous career and two children, will do that to a person. We first met Spears when she was just 17, pigtails and schoolgirl skirt and all. It should surprise no one that her appearance has changed since then. In fact, perhaps more so than with any other celebrity, we've witnessed it before our very eyes — from her bra-clad "I'm A Slave 4 U" era to the 2007 head-shaving incident to her current embrace of sweatpants and T-shirts (a style choice we strongly endorse, for what it's worth).

We all know Spears no longer looks like a teenager because we ourselves watched her age, awkward moments and all. But that might be why she appears to be heavily airbrushed so often. Take this memorably bad Lucky cover from 2012, which received so much backlash the magazine issued an apology:

We know Britney's older. We saw her get that way. And yet, instead of showing Spears as she looks today, magazines and brands insist on altering her image again and again, forcing a youthful beauty standard on a woman who once fit it so conveniently. The result? Covers like the January 2015 issue of Women's Health, not to mention airbrushed ads like her infamous Candies campaign.

It doesn't have to be this way. The incredulous responses Women's Health has received today should remind media outlets everywhere that airbrushing and other alterations aren't fooling anyone — and that they don't need to. Women, like men, get older; their abs aren't always as strong as yesterday, nor is their skin as smooth or their hair as vibrant.

Casting that reality aside in favor of a more perfect, digitally enhanced image does a disservice to female readers looking to magazines for inspiration as much as to the cover girls who agree to pose for them. When we let Britney be Britney, we'll be letting ourselves off the hook, too.