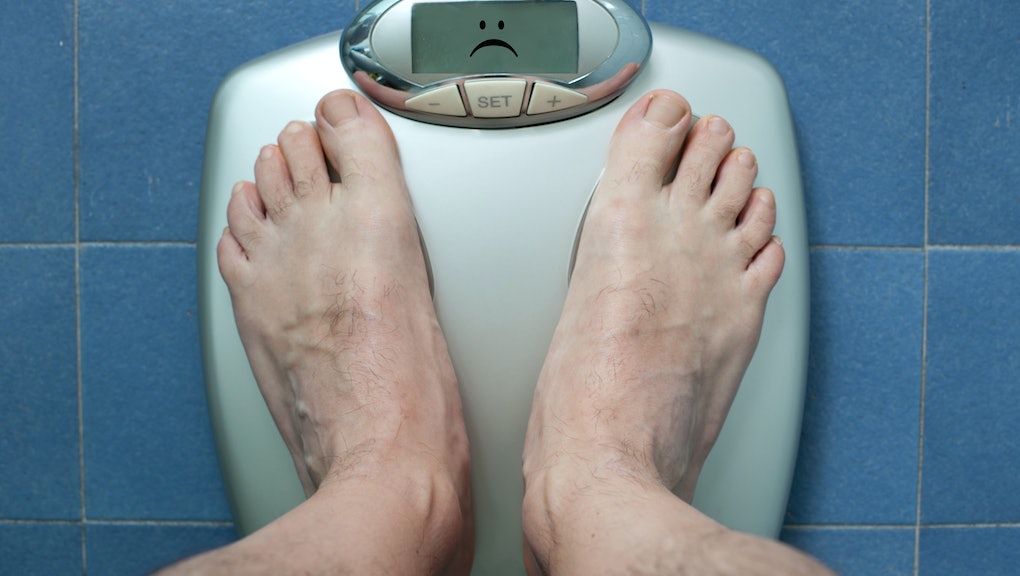 A team of researchers from the Harvard Stem Cell Institute and Massachusetts General Hospital have kicked off the next era in weight-loss science by inventing what's being called an "obesity pill"— a drug that purports to transform the "bad" fat that clings to our midsections into "good" fat that literally vanishes from our bodies.

The research is still in the proof-of-concept phase, meaning the scientists have shown enough promise to start therapeutic and clinical trials. That's welcome news, because we're long overdue for a medical breakthrough in treating obesity, a public health epidemic that affects almost 80 million Americans and costs our healthcare system billions of dollars a year.

Here's how it works: Humans have two kinds of fat: white and brown. White fat is the visible jiggle that makes up beer bellies, love handles, and other fleshy add-ons. Brown fat, on the other hand, doesn't jiggle, and it's only found around the neck and shoulders. We'd be skinnier if we had more brown fat and less white fat. Unfortunately, our bodies turn the calories we consume (and don't burn off) into inert energy stored in white fat cells.

But — and here's the crux of the obesity pill — Harvard scientists discovered that certain drugs can convert white fat cells into brown fat cells, which happens to also be how exercise helps us shed weight where it matters. Researchers, who published their findings in Nature earlier this month, used stem cells to screen chemical compounds and found that certain drugs can speed up metabolic activity inside white fat cells by inhibiting a key protein molecule, thereby making them more closely resemble brown fat cells. So far, the team has found two drugs that spark this conversion process, but they're confident that further studies will unearth many more drugs with the same fat-browning power, according to research team member Chad Cowan.

The Harvard obesity pill is changing the weight-loss pill game. This is because it works differently than other weight-loss medication currently available to clinically overweight people. Over the years, Cowan explained, doctors have been able to prescribe a few different kinds of drugs. But a safe, effective pill with lasting effects has yet to hit the market.

Stimulants, which became popular for weight loss in the '50s, temporarily rev up people's metabolism, but wear off quickly and come with unpleasant side effects, including headaches, anxiety, increased blood pressure and rapid heart beat.

Lipase inhibitors, which reduce the body's ability to absorb calories from food, result in minor weight loss and come with the unsavory side effect of loose, greasy stool.

Most recently, the FDA approved Contrave, which is a hybrid of two drugs — a chemically distinct type of antidepressant (Wellbutrin being the best-known formulation) mixed with a stimulant used to treat addiction. Contrave joins two other relatively new medications that include mood-balancing chemicals originally used to treat psychiatric disorders. For the sake of appetite suppression, Cowan said this class of drug is effective until people discontinue treatment, and the pounds pile back on.

So, has the pill replaced the need for the gym? Not exactly, according to Cowan. Popping a pill can't build or strengthen muscle the way load-bearing exercise does. But, in converting white fat into brown fat, the obesity pill does replicate the way exercise burns fat, a process experts previously thought was unique to physical activity. People who exercise regularly have a higher brown-to-white fat ratio and lower rates of diabetes, among other metabolic diseases.

Perhaps drugs could mimic exercise in other ways, too.

"Medication could potentially replace exercise in terms of producing some positive benefits, like sleeping better and relieving stress," said Cowan, "if we figure out what exercise does—but no one's there yet."

People at risk for weight-related health concerns would certainly get first dibs on the drug, said Cowan. Teenagers battling the bulge might be an especially good target population. Statistically, being overweight during early adolescence, even briefly, is linked to more obesity down the line.

So, unlike weight-loss drugs currently filling pharmacy shelves, the pending Harvard obesity drug may be a consumer-friendly medication for people looking to get or keep the trim physique that fewer Americans achieve with each passing year.

Time, and a sizeable investment from big pharma, will tell.