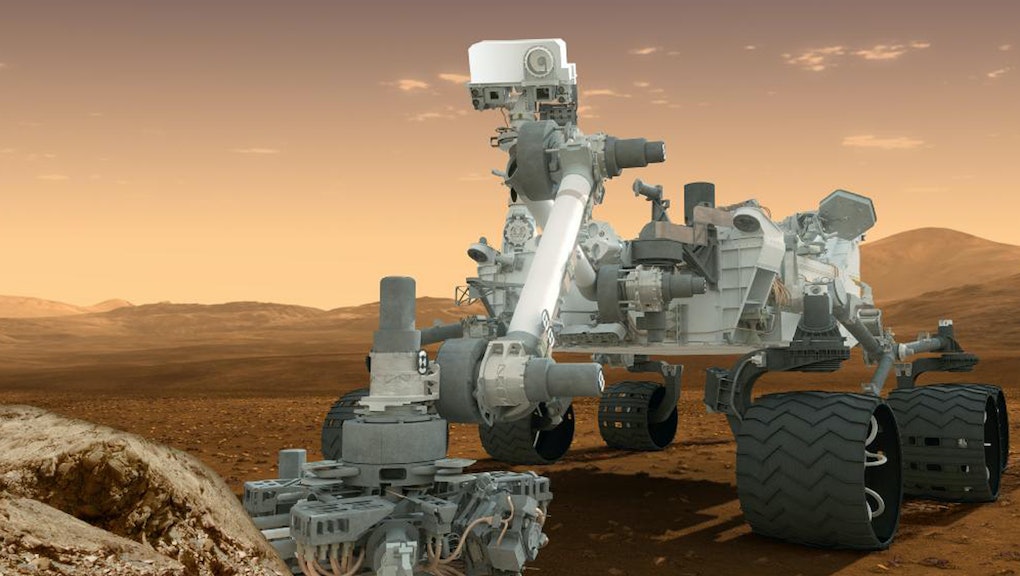 The news: On Tuesday, NASA announced that its one-ton Curiosity rover made a surprising discovery on Mars: "burps" of organic methane gas that very well may be evidence of living microbes beneath the planet's surface.

According to the BBC, it's minuscule in comparison to the Earth's concentration of methane (1,750 parts per billion) but still more than enough to relax scientists who worried about the rover's previous failure to detect Martian methane. The evidence suggests that the methane came from a large, localized source rather than from far away.

Since 95% of methane on our own planet is generated by life, the so-called "burps" might be evidence of living microbes beneath the surface. At the very least, NASA is calling it solid evidence of "active, ancient organic chemistry on Mars."

No silver bullet yet: This is very good news for people hoping we're not alone in the universe, since the discovery could also be further evidence of liquid water beneath the Martian surface.

But scientists believe a number of different causes could account for the methane fluctuations. Curiosity researcher Sushil Atreya told the BBC the methane could be leaking from clathrates, "molecular cages of water-ice" that trap other substances and occasionally release them when destabilized. The original methane may have been left by now-extinct life or generated by a process called serpentinization, a chemical interaction between water and rocks.

But there's still a lot of reason to be optimistic: The authors of the newest analysis seem to be confident that the measurements are more consistent with methanogenesis by microbial organisms, either today or in the planet's ancient past.

"Right now, it's too much of a single-point measurement for us really to jump to any conclusions," Paul Mahaffy of NASA's Goddard Space Flight Center told Space.com. "So all we can really do is lay out the possibilities. And we certainly should have an open mind. Maybe there are microbes on Mars cranking out methane, but we sure can't say that with any certainty. It's just speculation at this point."

Unfortunately, the current rover can't do much more to detect life than it's already been doing. In the meantime, we'll have to wait for a more precise spacecraft like the ESA's ExoMars mission in 2019 or an eventual manned mission to the red planet. The odds are still looking good that one of these expeditions could make one of the biggest discoveries in human history: We're not alone.