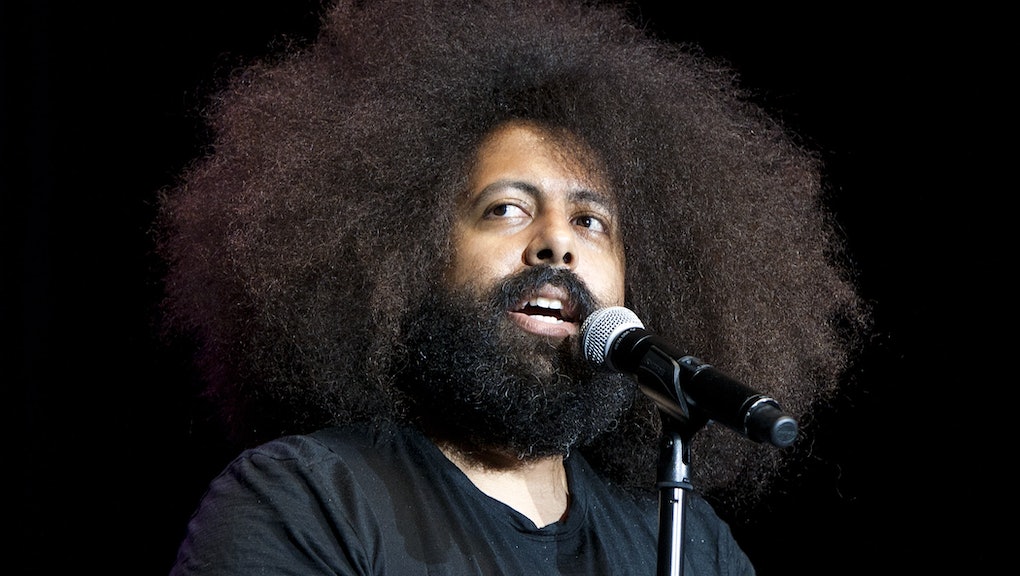 It's always difficult to discern whether Reggie Watts performances are concerts or comedy shows. They have a free jazz looseness about them: Everything he does is improvised, and nearly all of it is brilliant. It's his undefinable style that's made him one of the most innovative live performers going today — but that same daring has kept him well outside of the mainstream eye.

All that is about to change.

CBS recently tapped him as the new bandleader for the new Late Late Show, formerly hosted by Craig Ferguson. Watts will now have a camera trained on his face every night, coming up with viral gold to rival Jimmy Fallon and the Roots' own. His idiosyncratic brand of anti-comedy is finally receiving the recognition (and the paycheck) it deserves, and the insanely talented alt-performer is about to get his due.

Watts has already racked up experience co-hosting and "band-leading" IFC's Comedy Bang Bang. Though many of his musical interludes feature him banging on the piano and speaking nonsense, Watts does showcase his immense musical talent from time to time. In an ongoing segment called "Reggie Makes Music," he teams up with guests to improvise songs using a microphone, a piano and loop pedals. The results range from hip-hop diss tracks to dreamy Portishead-esque trip-hop to smooth jazz with comedian Jon Daly, who is an able saxophonist, as it turns out.

This unpredictability is one of the cornerstones of Watts' act.

But part of Watts' long road to fame is his unwillingness to compromise. His style has run counter to many of the comedians he's worked with over the years. In 2010, he was the opening act for Conan O'Brien's Legally Prohibited From Being Funny on Television comedy tour. The tour gave him one of his first tastes of national exposure, though it only lasted two months.

O'Brien's bits are always meticulously written, in contrast to Watts' absurdist anti-comedy. "Conan, in other words, is a recognizable type of comedian: a subspecies of the genus Letterman," wrote New York magazine in review of their tour. "Watts is like a character Conan might have invented — half-man, half-astral-funk Muppet."

Since then, he's performed on Conan's show and Jimmy Kimmel Live. Some genius actually invited him to do a TED talk in 2012. And while his comedic star has risen, his musical one has too. He performed alongside LCD Soundsystem during their final concerts in 2012. In 2013, he recorded an amazing NPR Tiny Desk concert. And last month, he released a song with Australian electronic duo Flight Facilities. He's slowly built his career's momentum up to this point, where producers see he's fit to hold down a permanent and headlining slot on Late Late Night.

The talk show bandleader slot is a coveted position these days. In leading the musical duties on Jimmy Fallon's Tonight Show, the Roots' career has reached unforeseen levels of stability and draw. And Fred Armisen's position on Late Night With Seth Meyers has won him wholly new attention for his musical abilities. Reggie Watts will now enjoy the same. His once-long shot, chaotic comedy music will now be front and center in the media cycle. Prepare for a revolution in musical comedy when Watts' TV residency starts early next year.