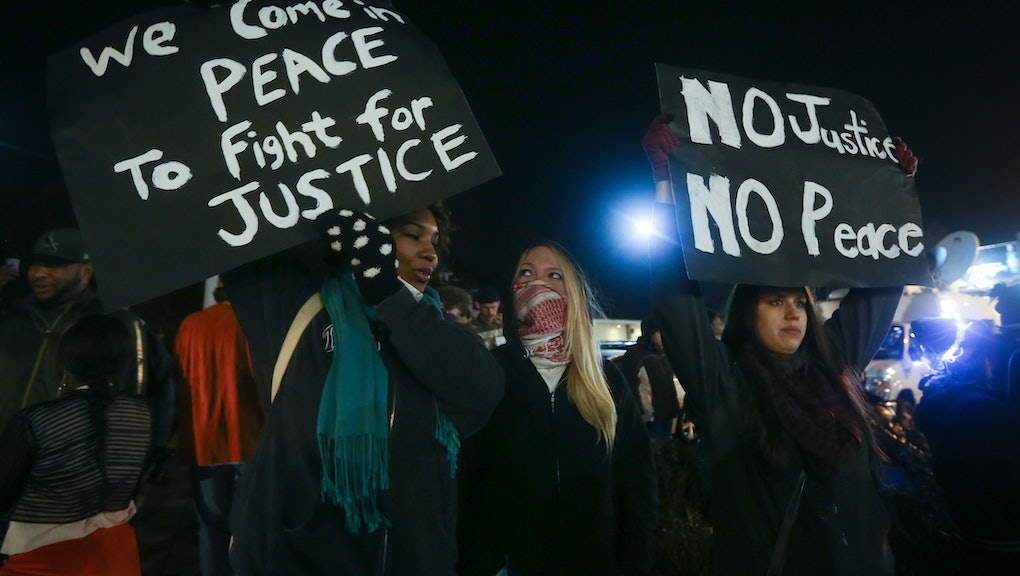 The Michael Brown Saga Just Took Its Most Disturbing Turn Yet

Less than a month after a grand jury declined to indict Officer Darren Wilson in the August shooting of unarmed black teenager Michael Brown, a new report suggests that the key witness testimony may have been deeply flawed. Not only that, but the Smoking Gun reveals that the witness herself, 45-year-old Missouri resident Sandra McElroy, has a criminal past who admits to having racist views.

On Aug. 9, the day that Wilson shot Brown, McElroy wrote this journal entry: "Well I'm gonna take me random drive to Florissant. Need to understand the Black race better so I stop calling Blacks Niggers and Start calling them People."

The documentation of such a blatant display of racist views should have raised a red flag for prosecutors. It didn't, and state prosecutors went ahead with putting her in front of the grand jury. But this journal entry is just one in a long line of deep flaws in this witness's testimony:

She didn't come forward for four weeks after the shooting. The long lapse between the shooting incident and the witness's decision to come to the cops with her story has raised eyebrows as to whether the witness may have conformed her stories to follow those reported in the press. McElroy's testimony ties in very neatly with Wilson's account, which is probably why Wilson's defenders would have used it.

The timing of her testimony is sketchy for more than just the long lapse, though. By the time McElroy came forward with her description of the event, a general outline of the occurrence had already been detailed by the press. As the Smoking Gun notes:

The timing of McElroy's interviews with authorities is suspicious: Both her statement to St. Louis on Sept. 11 and another to Justice Department prosecutors on Oct. 22 immediately followed stories detailing Wilson's account of the day.

This wouldn't be the first time that she gave a faulty testimony. According to the Smoking Gun, McElroy "once insinuated herself into another high-profile St. Louis criminal case with claims that police eventually dismissed as a 'complete fabrication.'" In 2007, following the high-profile rescue of a boy who had been kidnapped years earlier, McElroy went to police with claims that she had tipped off law enforcement five years before the young man was found. McElroy told police that she had known the kidnapper for 20 years and also claimed to have gone to the police right after the child disappeared, but that the police dismissed her tip.

Upon investigating McElroy's story, they found no record of any contact with her in regard to the kidnapping case. The police dismissed her testimony.

Her storyline of the shooting was inconsistent. McElroy's story was riddled with holes and inconsistencies. Ferguson is located about 30 miles away from her home, and the witness's reasons for visiting the area continually shifted. First, she said that she was going to visit a high school classmate who she hadn't seen in 26 years, but she didn't have an address or a phone number for the classmate. Then she said that she just pulled over to smoke a cigarette and ask for directions.

Later, McElroy said that her drive to Ferguson was actually part of her work as "something of an amateur urban anthropologist," the Smoking Gun said. During her testimony, McElroy told jurors that she likes to "go into all the African-American neighborhoods" to "strike up a conversation" because she was "trying to understand more." When she presented her story to the Ferguson investigators, they reacted with skepticism and "reminded her that it was a crime to lie to federal agents."

This was an unreliable witness. McElroy has a criminal past and a long history of posting racist comments online.

Upon investigation of the witness's YouTube page, multiple instances of overt racism were found. The Smoking Gun reports:

"An examination of McElroy's YouTube page, which she apparently shares with one of her daughters, reveals other evidence of racial animus. Next to a clip about the disappearance of a white woman who had a baby with a black man is the comment, 'See what happens when you bed down with a monkey have ape babies and party with them.' A clip about the sentencing of two black women for murder is captioned, 'Put them monkeys in a cage.'"

An even bigger problem: The fact that such a flawed witness was even able to testify reveals a problem that runs much deeper than just the Michael Brown case; it reveals inherent flaws in the grand jury system.

While McElroy's testimony is deeply problematic, she isn't the first witness to give a dubious testimony. Plenty of grand jury witnesses gave differing accounts. Following the media frenzy, the Washington Post reports that "there were dozens of witnesses, many of whom remembered conflicting versions of the same events." However, the big problem is that these account, which really should not have been included in the first place, lie at the center of the case for Wilson.

We can thank the grand jury system for that. The prosecutor can almost entirely shape how the grand jury views the case, because he or she is the one who presents the evidence to the jury and decides which witnesses appear and in what order. So for a prosecutor trying to defend Wilson's shooting of Brown, a testimony like that of McElroy would be a prime option.

Clearly the choice paid off for prosecutors. McElroy's testimony became "baked into the narrative of the Ferguson grand jury" that ended up exonerating Wilson. And while McElroy's testimony is a problem in and of itself, the fact that such an unreliable narrative and unfit witness was even able to testify is the bigger problem. When a system allows the "truth" to be shaped by cherry-picked stories, the results are bound to be biased.