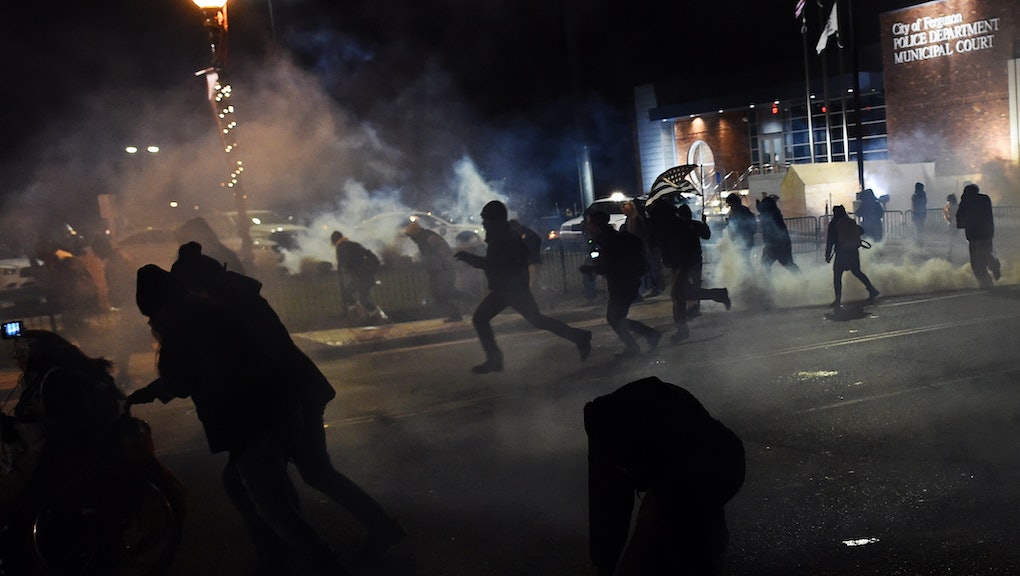 Why Every Police Officer in Ferguson Needs to Go See 'Selma'

On Nov. 19, a nonviolent rally took place in front of the police station in Ferguson, Missouri. Around 35 demonstrators showed up, shouting and chanting slogans at the two dozen officers lined up in front of their headquarters across South Florissant Avenue.

"Indict the cop!" the protesters yelled. At the time, they were still waiting for a grand jury to indict Officer Darren Wilson for killing unarmed teenager Michael Brown — a move it declined to make the following week, sparking multiple nights of civic unrest.

But this scene is not new in America. People have been demanding equal rights for black people in the eyes of the law since at least the time of slavery. And it's certainly not new in Ferguson, where the past few months have transformed this quiet suburb into military-occupied territory.

The reality is, we've rarely seen such high levels of nationwide fervor around racial inequality since the time of the civil rights movement. For a remarkable illustration of how this is playing out today, look no further than the upcoming movie Selma.

The film is almost impossible to watch without thinking of what's been happening in St. Louis since August. Due out in theaters on Christmas Day, Selma tells the story of Martin Luther King Jr. and the voting rights demonstrations he organized in Alabama in 1965.

One of its most powerful scenes involves a protest in front of a courthouse, where a group of demonstrators faces off against a squad of law enforcement officials. Moment by moment, the scene's parallels to what happened at the Ferguson Police Department this fall are uncanny.

Like that day in Selma, the mood on Nov. 19 was tense. At least two arrests had already been made, and the riot shields, helmets and nightsticks gripped tightly in the officers' hands made it clear how sharply things might escalate. The wait wasn't long — once people stepped into the roadway and blocked traffic, the police line advanced, muscling into the crowd and slamming their shields into anyone too slow to scatter.

One arrest stood out in particular — maybe because she was a woman, relatively small and wearing a bright orange clergy vest. Five officers suddenly converged on her and tackled her to the ground, flipping her onto her stomach and holding her down as they cuffed her. Within moments they were carrying her into the station, essentially hogtied by her arms and legs as she screamed for help.

It's one of those things you don't expect to see too often. Compare that to this scene from Selma, a moment captured by photographers all those decades ago and recreated in Ava DuVernay's film.

In both cases, armed and (mostly) white officers wade into a crowd of unarmed (mostly) black demonstrators and knock them to the concrete, ordering them to disperse and accusing them of unlawful assembly. Both occur in an otherwise unassuming small town, more easily linked to bake shops and diners than riot helmets and tear gas. And especially prescient is how they detain Oprah Winfrey's character — five or so policemen tackle her to the ground as she screams at the top of her lungs in objection.

A later scene proves just as eerie. When a group of demonstrators tries marching across a bridge toward Montgomery, the officers blocking their path don gas masks and fire chemical agents into the air. The scattering crowd, the tears and smoke-filled sky — all form a frightening link between Selma-past and Ferguson-present.

Watching this happen both onscreen and in person, one thing becomes abundantly clear: Whether it's 1965 or 2014, America's police have regularly acted as frontline instruments of repression in times of protest. This isn't exactly a revelation, but it does demonstrate why officers have a lot to learn from Selma. If nothing else, the movie provides a very clear picture of who ends up on the wrong side of history.

And therein lies much of its value. Because whether police are brutalizing protesters fighting racial segregation in mid-century Alabama, or doing the same to demonstrators in modern-day Missouri, the visual depiction of their violence makes it easier for everyone to see how consistent their role in these events is. They are framed as an enemy, and rightly so — judging by their recent conduct in Ferguson, they're still playing this role with no sign of slowing.