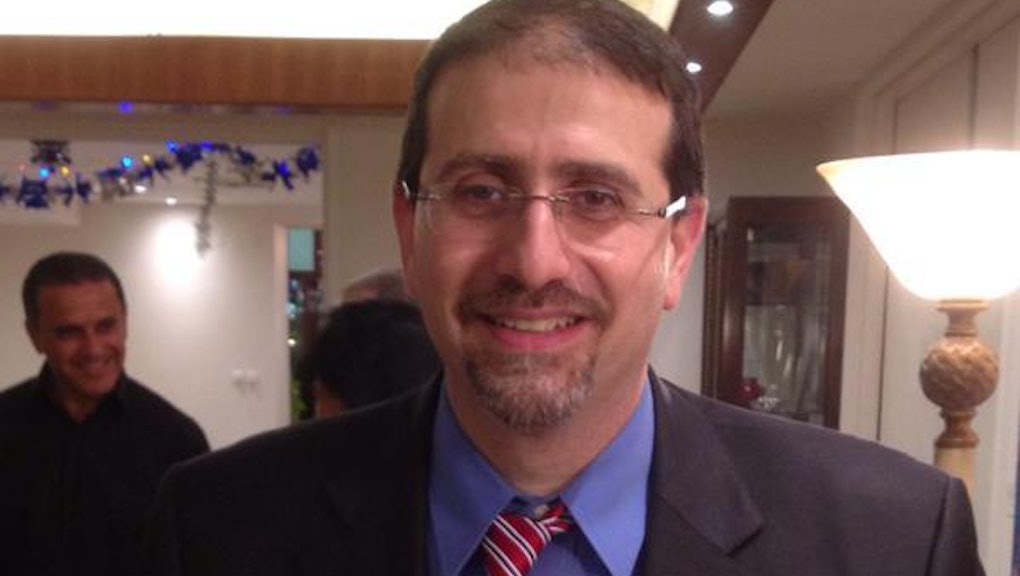 One Image Perfectly Sums Up the Precarious U.S.-Israel Relationship

The news: Last week, the United States ambassador to Israel, Dan Shapiro, got a Hanukkah present at a staff holiday party that basically summed up the enduring U.S.-Israel military relationship.

The photo, which the ambassador proudly posted to Twitter, shows Shapiro wearing red, white and blue; he's smiling as he stands over a model of Israel's state-of-the-art, U.S.-funded Iron Dome missile system:

The gift: Though Shapiro might be having a tough job lately, considering the countries' increasingly rocky relationship, there's one thing that will always stay strong: Israel's love for super-expensive, U.S.-funded military toys.

And though Shapiro's happily holding a model of one of the most expensive toys the U.S. bought the IDF in recent years, it's not even a particularly nice one. While Foreign Policy reports the replica was made of "an empty box of coffee capsules, an old VHS cassette, paper clips and heavy-duty tape," the real thing was notably more expensive. The U.S. largely paid for it with hundreds of millions in funding.

In August, Congress allocated another $225 million in funding for the $1-billion-plus system to protect Israeli cities and settlements against Palestinian rocket attacks. A few days ago, it got $175 million more.

Or, as the Onion brilliantly satirized the program back in 2013:

The relationship: With U.S.-Israeli political relations at a serious and possibly unprecedented low, Foreign Policy reports that the military alliance remains as strong as ever. Despite serious tensions between Israeli Prime Minister Benjamin Netanyahu and President Obama, the U.S. military has actually gone further than previous administrations in areas like "bunker-busting bombs."

The emphatically pro-Israel Anti-Defamation League's Abe Foxman has similarly praised outbound Secretary of Defense Chuck Hagel's "energetic stewardship of America's commitment to Israel's security." The U.S.-Israel military alliance is so strong that White House and State Department officials were surprised to learn that the Pentagon had been sending munitions to Israel during the 2014 IDF campaign in Gaza, which resulted in over 2,100 Palestinian deaths.

Even as political relations have descended into what some are calling a crisis, this military relationship ensures American support of Israeli policy will remain unchanged for a long time to come. Mother Jones reports that Israel enjoys about $3.1 billion in military assistance from the U.S. every year, even as it spends tens of millions helping assist reconstruction efforts after Israeli operations and hundreds of millions more assisting Palestinian refugees in general. Since 1962, Israel has received about $100 billion in U.S. funds.

That's one expensive friendship. And it probably shouldn't be made light of on Twitter.