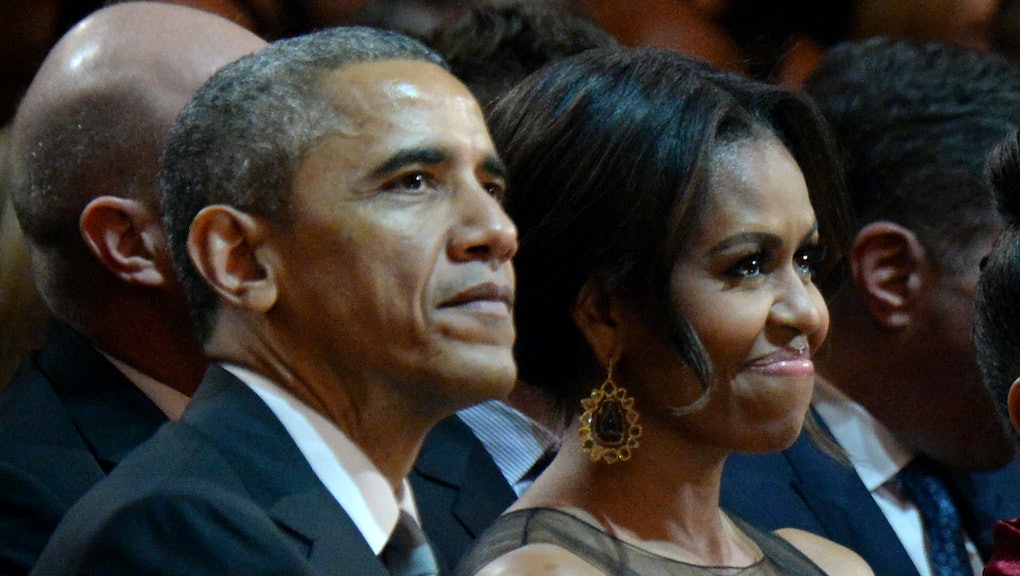 "He was wearing a tuxedo at a black-tie dinner, and somebody asked him to get coffee."

President Barack Obama and first lady Michelle have opened up about their personal experiences with racism and prejudice in a candid interview with People, on newsstands Friday, joining a national conversation about race in America following the failure of two separate grand juries to indict white police officers responsible for the deaths of two unarmed black men.

"There's no black male my age, who's a professional, who hasn't come out of a restaurant and is waiting for their car and somebody didn't hand them their car keys," said Obama, who confirmed that this very indignity has happened to him.

Even the White House isn't perfect: The first couple admits that six years in the White House has shielded them from much — although obviously not all — of the everyday prejudices they once experienced. Before that, however, "Barack Obama was a black man that lived on the south side of Chicago, who had his share of troubles catching cabs," the first lady said.

But not even the benefits of two Ivy League degrees and being married to the most powerful man on earth have always protected Michelle Obama from being treated like the help. She tells a story about her much talked about visit to Target as first lady:

"I tell this story — I mean, even as the first lady — during that wonderfully publicized trip I took to Target, not highly disguised, the only person who came up to me in the store was a woman who asked me to help her take something off a shelf. Because she didn't see me as the first lady, she saw me as someone who could help her. Those kinds of things happen in life. So it isn't anything new."

They admit that they're still blessed: The Obamas tell People they're grateful that most of these slights have been merely insulting, rather than dangerous. "The small irritations or indignities that we experience are nothing compared to what a previous generation experienced," the president said.

"It's one thing for me to be mistaken for a waiter at a gala. It's another thing for my son to be mistaken for a robber and to be handcuffed, or worse, if he happens to be walking down the street and is dressed the way teenagers dress," he continues, echoing a now iconic previous speech following the verdict in the death of Trayvon Martin stating that the dead teenager "could have been me 35 years ago."

These personal anecdotes from the world's most visible black couple will go a long way in showing the entrenched nature of prejudice in America. Hopefully, stories like theirs will encourage Americans to address racism in all its forms.