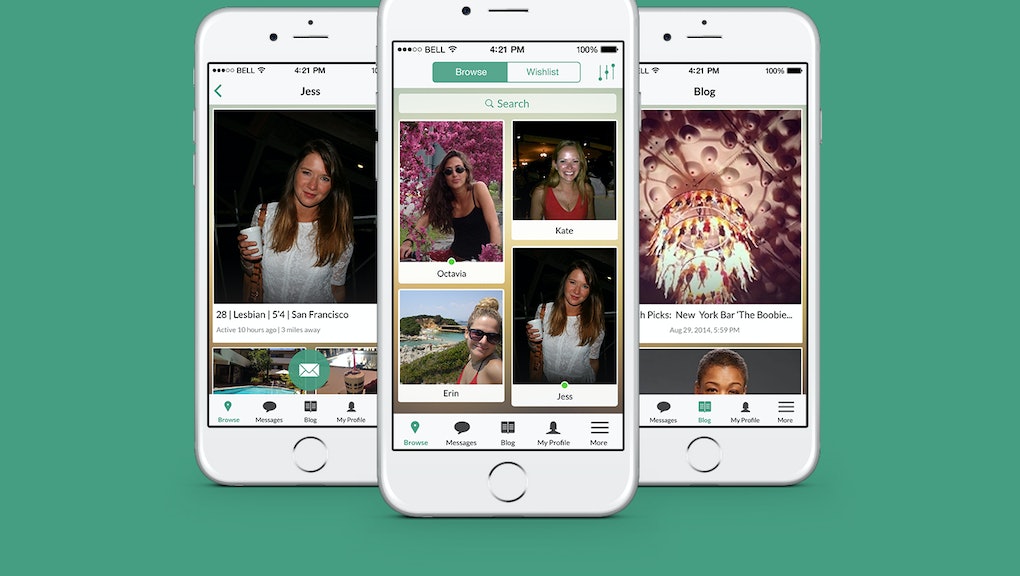 One Sentence Sums Up the Struggle Lesbians Face With Online Dating

When it comes to lesbian and bisexual online dating, the general premise is the same as usual — see photos, scroll through profiles, swipe or message when intrigued.

But the responses gay women can expect have a distinct flavor to them, one that can be summed up a little like this:

For the young and straight, there are Tinder and OkCupid; for the gay male community, Grindr and Scruff. But while sites for American women seeking women do exist, there are not enough "safe spaces" specific to the diverse range of queer women's interests.

A dating space free of curious men. Some attempts at sites for lesbian and bi women, like Brenda, have been met with lukewarm enthusiasm. A new app, Scissr, is gaining buzz as "the new Tinder for lesbians," but is still in its infancy. The one that's gotten the best response is the U.K.-based DATTCH, which launched in New York City, Los Angeles and San Francisco to much fanfare this year — and that's likely because it was created with this specific concern of lesbians in mind.

DAATCH founder and CEO Robyn Exton told Mic that the idea started two years ago when she realized that platforms for gay and bisexual women were limited to "a gay guy product that had been re-skinned pink and given to women, or a straight product where I could say I was interested in women."

There's nothing rewarding or complimentary about being seen as an object for another person's one-way gratification.

Unwanted attention online isn't foreign to women for all sexual orientations, but it's exacerbated by a lack of inclusive language on many dating sites. The mainstream platforms cater to a heteronormative user, first and foremost. Tracy Garcia, a femme queer woman of color, says she had trouble connecting with other women online even when she made her disinterest in men clear.

"When I was using OkCupid I had a hard time meeting other womxn [sic] and was constantly hit up by dudes, even if I put that I was a lesbian — which was an issue because I only had the option of selecting lesbian or bi, which are both hella limiting," Garcia wrote in a message to Mic. (OkCupid has since expanded its identification lexicon.) "Ultimately I was over getting random messages from guys and not finding any muxeres [sic] who were queer feminists."

"I was constantly hit up by dudes ,even if I put that I was a lesbian."

Harassment aside, lesbian dating can be different. Lesbian and bi women can operate differently than gay men or straight people when it comes to digital dating. Fast hookups are less common; as Rachel Kramer Bussel wrote in the Village Voice, "Lesbians tend to use social media to be more, well, social. That means holding out for the first few dates anyway, in stark contrast to those gay men for whom 'date' means 'fuckfest this Friday.'"

According to Exton, it takes an average of seven days for DAATCH users to meet in person, and within those seven days, users engage in three conversations on average. (That's arguably more than users on sites like Tinder, although the data is hard to pin down.)

Beyond possibly distinct dating styles, there's another reason lesbians and bi women benefit from their own apps: volume. Self-identifying lesbians make up 1.5% of America's female population, and bisexual women just 0.9%. "There's no debating reality: lesbians are working with a far smaller potential dating pool than straight women," Chloë Curran writes on After Ellen.

"The community is there — it's just not connected in one centralized place," Exton said, and an app allows women to both see how big the community is and to connect with more women who share their interests. That includes platonic friends, in addition to sexual or romantic partners.

Women need safe spaces to form connections. As Megan Johnson, a bisexual student in Vancouver, Washington, wrote in a message to Mic, these spaces are important to her as a queer woman because they are necessary "to have a more accessible arena to find love, sex, partnership, whatever it may be."

"Not having a place that allows the freedom of sexual expression has limited my playing field and for a while limited my expectations of what I could seek and find," she said. "All women — lesbian, bi, hetero, questioning — deserve a place to develop and cultivate the relationships they want with people of like minds."

And that includes a place to meet people free of harassment — and from men just looking to experiment.