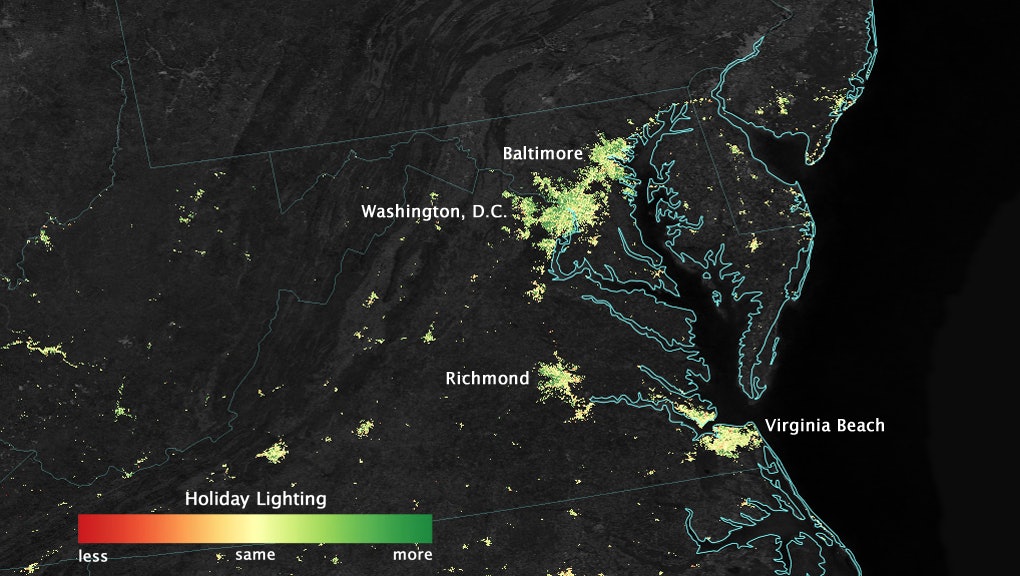 This Is What the Holiday Season Looks Like From Outer Space

Using images captured by the Suomi NPP satellite, NASA scientists have pinpointed the months during which nighttime lights shone the brightest, and the holiday season came out on top. In the United States, for example, the lights began shining brighter on Black Friday and kept going through New Year's Day.

Researchers estimated that the lights increased their output by 20-50% in many major cities; in the suburbs and outskirts of big cities, they increased by 30-50%.

"It's a near ubiquitous signal. Despite being ethnically and religiously diverse, we found that the U.S. experiences a holiday increase that is present across most urban communities," said Miguel Román, a NASA scientist who helped lead the research. "These lighting patterns are tracking a national shared tradition."

Washington, D.C. and Baltimore had many bright spots:

And the West Coast:

In the Middle East, the lights grew in intensity during the holy month of Ramadan. Scientists estimated that nighttime lights shone 50% brighter in cities across the region than during any other point in the year.

To ensure that the figures weren't anomalies, the team examined three consecutive years' worth of data, from 2012 through this fall. They found that the high points closely followed the Islamic calendar — as the dates of the holiday shifted from year to year, so did the peaks in light.

Not every city had the same output. Light output in Saudi Arabian cities like Riyadh and Jeddah skyrocketed by about 60% and 100%, respectively, whereas the lights in Turkish cities were much less bright during the same period. "Some regions in Syria, Iraq and Lebanon did not have an increase in light output or even demonstrated a moderate decrease, possibly due to unstable electrical grids or conflict in the region," NASA noted.

"Even within majority Muslim populations, there are a lot of variations," said Eleanor Stokes, a NASA graduate fellow who helped lead the study. "What we've seen is that these lighting patterns track cultural variation within the Middle East."

To conduct the analysis, scientists used an advanced algorithm developed at NASA's Goddard Space Flight Center. It gets rid of extraneous and disruptive elements — "moonlight, clouds and airborne particles" — so that it can gather data on city lights by themselves.

"What's really difficult to do is to try and track people's activity patterns and to understand how this shapes the demand for energy services," Román said. "We can now see pieces of these patterns from space — when, where and how often we turn on the lights."