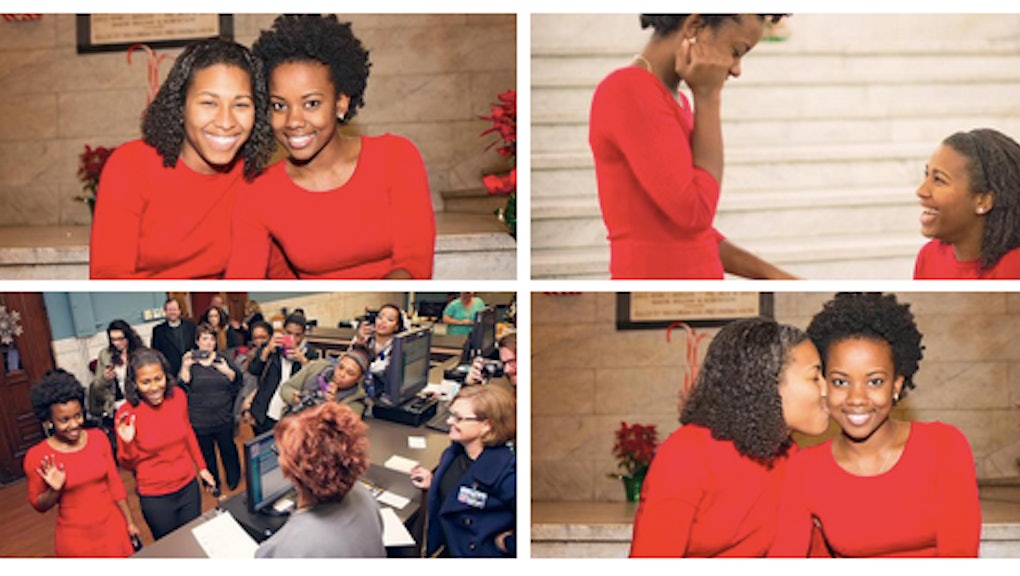 From #BlackLivesMatter to #BlackLoveMatters, Tuesday's marriage of two cofounders of Millennial Activists United is proof that love really can conquer all.

After 130 days of protest courtship, Alexis Templeton, 20, and Brittany Ferrell, 25, sealed the deal at St. Louis City Hall in front of a crowd that included supporters and St. Louis City Counselor Winston Calvert. The social media-savvy well-wishers documented the ceremony on social media, including posting a livestream of the ceremony.

Templeton told the crowd, "She'd made me happy for 130 days, and I want to make her happy for the rest of her life."

The marriage is a symbol of hope for the black community — it's a sign of its progress and of the diversity behind the #BlackLivesMatter movement. Two black lesbian women, who have been at the front lines of the fight in Ferguson, have emerged as faces of optimism for a more peaceful, loving future. Best man Jamell Spann said it best, in an interview with the Huffington Post, "You are looking at two people that stood shoulder to shoulder, faced rubber bullets, tear gas and discrimination."

"To be a black woman in America is an unfathomably deep struggle to go through day in and day out," Spann said. "And being a lesbian black woman in America — you just see how each level compounds. These two women represent the idea of freedom. They represent the idea of love and that black lives matter and have power and passion. It comes full circle; it's like watching poetry write itself."

Judging from Templeton and Ferrell's experiences — and the response across social media with hashtags like #RevolutionaryLove and #ActivistBaé — being a black queer woman at a time of struggle for all black lives is filled with passion and hope for a more united future, one where all lives are respected.

Indeed, Templeton encapsulated what it means to be a black queer woman in the time of Ferguson in this tweet: