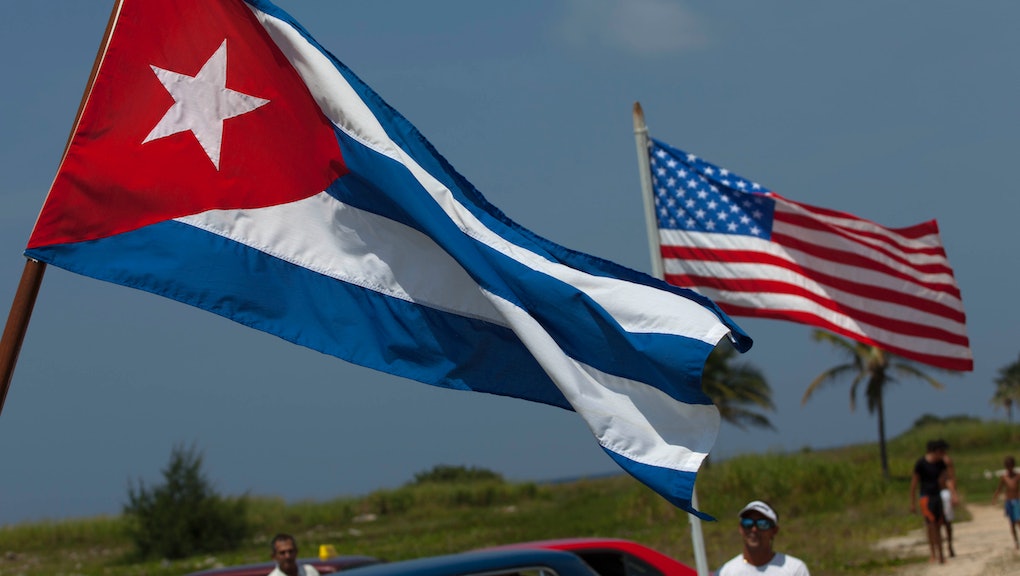 The U.S. Embargo of Cuba Has Been a Complete Catastrophe

The White House announced Wednesday the United States is in talks with Cuba over normalizing relations after more than half a century of enmity. It couldn't have come any sooner — the U.S.' policy toward Cuba has been a tragicomic disaster for decades.

Shortly after Fidel Castro seized power in Cuba in 1959, the two countries developed a hostile relationship that has remained frozen in time ever since. In the early 1960s, the communist regime established trade relations with the Soviet Union, nationalized its economy — which included a number of local subsidiaries of U.S. companies — and taxed American products at exorbitant rates. The U.S. responded by imposing trade restrictions and eventually severing all diplomatic ties.

Constant suspicion, economic embargo and an agenda of sabotage have defined the America's outlook on the island nation. In 1961, the CIA backed a coup attempt in the disastrous Bag of Pigs invasion, which was defeated by Castro's armed forces. This was followed by a series of failed attempts to assassinate Castro's person and character. Between 1961 and 1963, there were, at minimum, "five plots to kill, maim or humiliate the Cuban leader using everything from exploding seashells to shoes dusted with chemicals to make his beard fall out," according to Time.

The low point in relations came during the Cuban Missile Crisis in 1962, when it was discovered that Cuba was allowing the Soviet Union to build missile sites on the island. President John F. Kennedy ordered a full blockade of the island, and the world came as close as it ever has been to nuclear war.

Remarkably, the end of the Cold War did not thaw hostilities. In the 1990s, the U.S. actually ramped up its embargo regulations and increased its penalties for other countries that traded with Cuba. President George W. Bush's administration adopted aggressive measures designed to take further blows at the Cuban economy by focusing on illicit cash transfers, launching an information campaign and making the long-established travel ban stricter.

The U.S.' anachronistic crusade has caused untold harm to the lives of ordinary Cubans.

While the Bush administration kept close ties with an autocratic regime that sponsored radical Islamist activity in Saudi Arabia, Cuba was deemed one of the few remaining "outposts of tyranny" in the world and accused of hosting dangerous biological weapons using distorted intelligence. Recently it was discovered that USAID engineered an effort to spark insurrection in Cuba by infiltrating its hip-hop scene, compromising what had already been an organic source of dissent in the country.

The U.S.' anachronistic crusade has caused untold harm to the lives of ordinary Cubans.

"The economic damages accumulated after half a century as a result of the implementation of the blockade amount to $1.126 trillion," said Cuban Foreign Minister Bruno Rodriguez before the U.N. General Assembly. Despite the fact that the island poses no tangible threat to the U.S., it keeps in place an indiscriminate blockade that has made the lives of millions of ordinary innocents more difficult.

And none of it has worked. Cuba has managed to outlive the Soviet Union and remains one of the few regimes in the world that still identifies as communist. The Castro family, which has been able to use the U.S.' aggression as shield for deflecting domestic criticism and sustaining some faith in the communist project, still rules the island. Che Guevera's visage still graces the walls. While Cuba's economy has been transforming into a new breed of market socialism, it is doing this on its own terms and not because the America's big stick has scared it into doing so.

The U.S. embargo has failed in its goal to undermine Cuba's authoritarian political system, and caused its people unnecessary suffering. While the embargo can only be fully repealed by Congress, Obama's actions to unravel this obsolete dogma are a momentous step. Hopefully congressional leaders can follow his lead in finally establishing a sensible and humane relationship between the two countries.