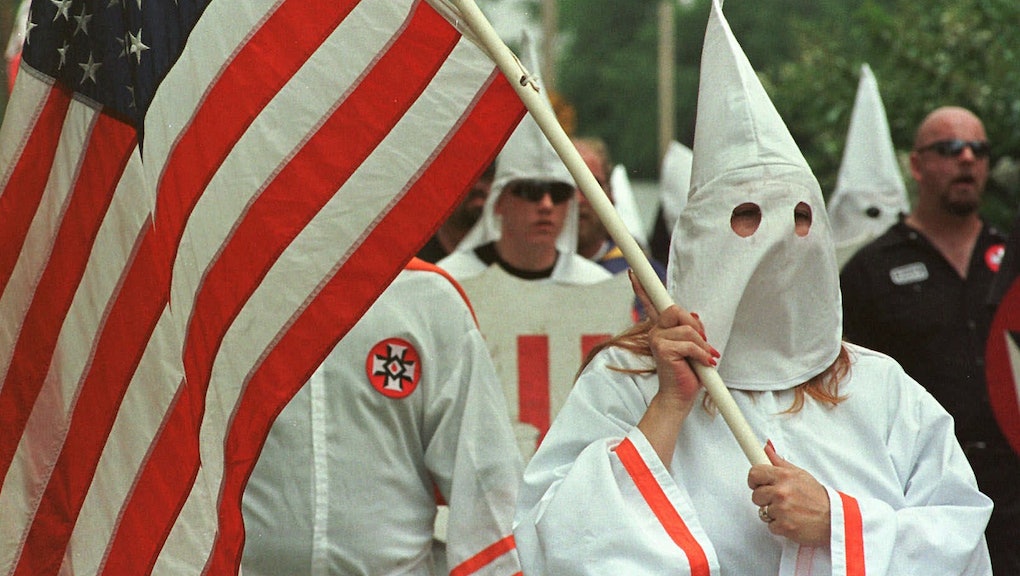 One Map Reveals the Shocking Truth About Racism in America

These chapters aren't just remnants of America's more racist past; this year alone, one of the organization's chapters tripled in size. And the KKK isn't the only hate group that has been on the rise in the past few decades.

There are currently 939 known hate groups in the United States, "including neo-Nazis, Klansmen, white nationalists, neo-Confederates, racist skinheads, black separatists, border vigilantes and others," the Southern Poverty Law Center reports. Since 2000, that number has increased by 56%.

This interactive map, made by NewsOne, offers a look at the outstanding prevalence of the KKK. The reality is shocking:

While the KKK isn't the nationally unified organization it once was, SPLC compiled a list of each chapter that existed in each state to come up with these totals. Those figures tell us that the KKK currently has between 5,000 and 8,000 members in 160 chapters across the country. Vox reports that the only states without active chapters are Alaska, Hawaii, Idaho, North Dakota, Oregon, South Dakota, Washington, Wisconsin and Wyoming.

Why are hate groups still such a problem? The SPLC attributes the rise to a few different factors. President Obama's election in 2008 fueled a great deal of anger and fear "over the nation's ailing economy, an influx of non-white immigrants and the diminishing white majority."

For instance, following the election of the nation's first African-American president, the anti-government "Patriot" movement saw a major resurgence, rising in membership by 813%.

Moreover, the increased extremism and partisanship in politics and in the mainstream media has led to more radical public opinion. Outlets have taken advantage of their platforms to "legitimize false propaganda about immigrants and other minorities" and to spread the conspiracy theories that fuel many militia groups.

There is a solution. While the First Amendment prevents the U.S. from banning hate groups like the KKK, their continued popularity is a troubling indication of deeper problems. By increasing funding for education, health care and other services for the disadvantaged people that these hate groups target, the U.S. may be able to dissuade any further growth.